Let's Get the Terrible Apple Car Jokes out of the Way 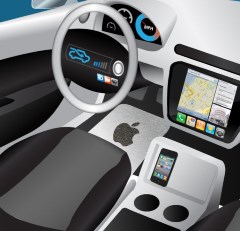 A photograph of the Apple car. I know it's genuine because it's a jpg, not a Photoshop file.Rumors are swirling about a secret car being developed by Apple. This is because swirling is all that rumors can do. I don't like it either, but they refuse to partake in the use of any other verbs.

What's this car going to be, exactly? One of those self-driving vehicles running on Apple software but built by someone else? An electric Tesla competitor designed and manufactured entirely by Apple? Four wheels attached to a solid block of aluminum with rounded corners?

No one knows. But that won't stop the inevitable death march of business/tech website articles about the topic, each with eye-catching headlines and three sentences of vague speculation.

Many people will feel compelled to make terrible puns or jokes about the Apple car. My hope is that by publishing every conceivable bad joke now in its worst possible incarnation, I can somehow stem the tide.

Here Are The Apple Car Jokes Please Don't Steal Them

They're The Text Below This Line

What are they gonna call this thing, the iCar? *double take, crosses eyes*

I sure hope the Apple car doesn't use that one version of the Apple Maps app to navigate! The version that didn't work very well!

The Apple car... hmmm... one wonders if it will be more expensive than similar cars. To a humorous extent.

To start the windshield wipers I bet you have to put two fingers against the glass and swipe. This is a reference to touchscreens.

That Apple car is incredibly thin. In fact, there's no room for you to get inside of it! All kidding aside, that is seriously a major design flaw.

Umm, it's Adam and Eve, not Apple and car!

Apple's engineers have done the impossible. The vehicle's seats are magical marvels of engineering. They support an incredible 130,000 seat covers, and that number is growing every day.

The Apple car only has one pedal.

Hey I heard that the Apple car dealership looks like an Apple store but with cars in it. Geniuses and benches. But also cars. Wild.

When you go to fill up the Apple car with gasoline, you'll find that you can't do it. The nozzle won't fit. Because the car uses a proprietary gas hole, and you'll have to buy an adapter. (If it turns out to be an electric car, just imagine this joke reworded to accommodate electrical outlets, perhaps with a comically oversized Lightning cable)

Knock knock! Who's there? Apple car. Apple car who? Apple car can also knock on doors!