It's a new year, which means it's time for a new list of the best party colleges in the USA. Something Awesome has exhaustively researched the subject of sweet party schools and we have compiled the definitive list for 2010. If you see your alma mater then your breast should swell with pride. If you don't see your alma mater, well, try harder next year! 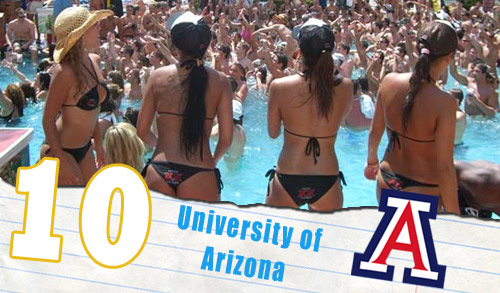 We start our list with fun in the sunny state of Arizona. U of A, not to be confused with ASU (Arizona's college for sex offenders), is a sun-drenched campus brimming with beer-slamming bros and beautiful bikini clad babes baked to a greasy golden brown. The start of each year at U of A is celebrated with the infamous Brew Crew's Brew Cruise. An artificial lagoon is dug and filled with water and the fraternities build rafts and reenact legendary naval battles for the amusement of the sororities. In the evening the booze flows freely and the sorority gals climb atop fiberglass rock outcrops and serenade the sloshed sailors with enchanting songs. Unlucky seamen lured to their "grave" are hauled onto the rocks and dressed as girls and must talk and pee like girls for the remainder of the semester.

Due to water shortages the past three years of the Brew Crew's Brew Cruise have been held in a lagoon of irrigation-grade gray water.

If you visit U of A to get your party on we highly recommend a trip to Mansfield Park, a quadrangle of boozy bars and clubs themed on the novels and characters of Jane Austen. The legendary authoress attended college at U of A and taught reading to young ladies for a number of years. Her book, Pride and Prejudice, is commemorated at the quadrangle's center with a fountain depicting a shitting, vomiting goose. 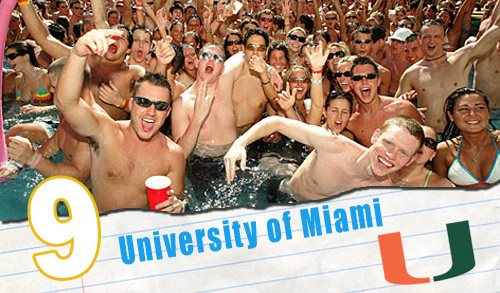 And you thought the bikinis at U of A were great! Swing down to happening Miami, where the neon nights become an endless party and you find it hard to make it to class in the morning with the bevy of prime breast meat on display at the local beaches.

Since 1982 the campus at the University of Miami has followed a caste and customs system loosely based on John Norman's Gor novels. There are free men, free women, and the kajira. The kajira are a class of tattooed slave girls drawn from the incoming class of freshmen, female students on academic probation, and free women who disobey strict curfew rules.

Kajira must refer to themselves in the third person and may not wear shirts or blouses. They may wear bikinis or bras during the Christian hours of the cycle, but after nightfall they must dress topless, in mesh, or chains as determined by their master (or Ubar). Kajira must present themselves for mating if approached by a free male and at the sound of clapping hands they are trained to react as if being struck with a lash. U of M is one serious party experience not to be missed by a freeborn Ubar of counter-earth!