I think it was Aristotle, or perhaps a cave man, who once observed, "Might makes right." A phrase as simple as it is true.

The threat of physical violence is the basic underpinning of civilization. That threat is how the dominant culture imposes its beliefs on others, how they collect taxes and raise armies to, in turn, inflict their ideas on faraway people in faraway lands.

To a certain extent, this threat of violence is even how we maintain politeness in society. I think it was John Wayne, or perhaps a cave man, who once said, "An armed society is a polite society." Without the fear of being summarily executed by a pistol shot we might feel free to stare at ladyfolk, play our music at unreasonable levels, walk suspiciously through neighborhoods, or text in a movie theater. 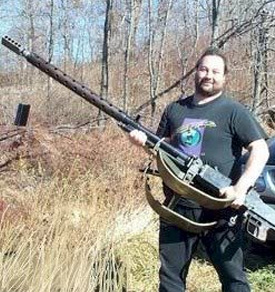 People go to him for his wisdom.The threat of violence, for lack of bothering to try to find a better word, is good. It is how we get things done. In any argument, ideas are meaningless, for it is the side with the most powerful arsenal which prevails.

Take the Lincoln-Douglas debates. Most forget that Lincoln, who later became one of America's Presidents, lost his election for senator and was soundly defeated by Frederick Douglas in these debates over slavery. Douglas triumphed because he carried a guisarme, or medieval polearm, at every event, which he used to menace and distract Lincoln.

Lincoln famously remarked, "I cannot help but hate this monstrous injustice called - Christ, you nearly took off my arm!"

If the argument goes to the most heavily armed, then nothing could be more pitiful than an argument for disarmament in which those calling for it are unarmed. Bilateral talks between the Soviet Union and the United States on the subject of limiting nuclear proliferation began in 1969 and resulted, over the decades, in a series of arms reduction treaties. You will notice that these talks were between the two nations with hundreds and hundreds of nuclear missiles pointed at each other.

If Jamaica had approached Kruschev and asked him to limit his nuclear weapons he wouldn't have even bothered to take off his shoe. If the Dali Lama had gone to Ronald Reagan and asked him to dismantle a bunch of Minuteman batteries he would have been lucky to get a handshake and a couple jellybeans.

Similarly, when a few women gathered to discuss gun control at a Dallas, Texas restaurant, they were greeted by over two dozen men, women, and children armed with semi-automatic rifles and shotguns. How did this confrontation end? Which side went home and whined to Huffington Post? It wasn't the side that brought an AR-15 to the parking lot of a Hooters. 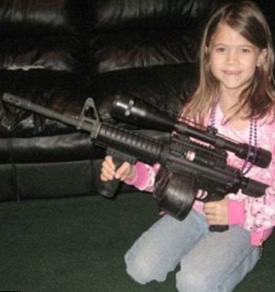 Fourth grade debate team champ.The media that advocates for gun control made some headlines out of this incident, but outrage over old-fashioned mob menacing is never going to top a steady stream of school shootings for argumentative weight. If blasting holes in a bunch of kids didn't move the giant boulder of the gun control argument, moms and mayors for gunsense or whatever they are calling themselves are not going to do it. They cannot win the argument because they don't have the power of threatened violence behind them.

Which brings me back to the Lincoln-Douglas debates. After being soundly crushed by Frederick Douglas and his guisarme, Abraham Lincoln learned his lesson. He continued to oppose the spread of slavery, but as he did so he made sure that he was backed by a lot of cannons and rifles, trains, sabers, gyrocopters, battle blimps, steam punk tanks, and whatever other weapons were popular back in the 1860s.

Those arguing for slavery also had a lot of these things and thought they could win the argument. Fortunately, they were wrong, because the north had way more weapons. By the time the steampunk tanks were rolling through the streets of Atlanta, the argument was won and the slaves had been freed.

If you want to win an argument, bring a gun. Bring a lot of them. Bring more than anyone else. The next time moms against gunsense for American mayors goes to eat hot wings and talk about background checks they need to come prepared. They need to overwhelm the opposition to gun control through force of arms.

Pile up shotguns and rifles. Load up cop killer bullets. Make some pipe bombs. Arming themselves to the teeth with guns is the only way to successfully advocate for gun control.

Might is the only way to have a polite society. Right?

I think a caveman said it.

You can find even more ridiculous fantasies of guns and violence on Zack's Facebook.