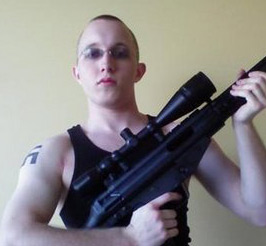 In addition to serving as a sobering reminder that some people still judge others by race instead of video console preference, this week's thwarted plot to assassinate Barack Obama was refreshingly humorous. Here's a breakdown of the plan that was concocted by two self-declared skinheads:

3. Don white tuxedos with white top hats and shoot at Barack Obama while driving toward his motorcade in a car that may or may not be white, depending on what color primer becomes after it's been laid down over an orange base and a confederate flag.

Their plot was poorly planned, overly complex, and based on the assumption that they were superior human beings despite the fact that all they managed to do was get caught. When you combine these factors, the result is at least ten times as funny as your basic "shoot the guy with a sniper rifle" assassination attempt. I'd wager that it's the funniest failed assassination plot in U.S. history, but you can judge for yourself.

The Plan: Build a gyrocopter in a barn, hoping the contraption is capable of floating up into outer space. While in orbit, use a spyglass to observe the White House and wait for Van Buren to emerge. When the opportunity presents itself, lower a very long rope with a noose at the end, snagging the president and hanging him.

Where It Went Wrong: The rope was eight inches too short. It skimmed harmlessly across Van Buren's forehead, knocking his bowler hat to the mud.

The Plan: Steal a milkman's carriage, then obtain a straw approximately 300 yards long. Use a pump to redirect the milk through the straw and into the mouth of Marshall as he sleeps. Continue to do this for several weeks until the vice president dies from drinking too much milk.

Where It Went Wrong: Thomas Marshall was not born until 1854.

The Plan: Ring a bell that wakes up the bird that lays an egg that rolls down a chute onto a moustrap that springs shut on a tube of toothpaste that squirts onto one end of a set of scales that knocks a precariously balanced watermelon onto a seesaw that launches a bowling pin into a basket that sits on a piston that activates a mechanical arm that clobbers Hoover in the head with a hammer.

Where It Went Wrong: An impatient Hoover walked away before Goldberg could finish setting up his machine.

The Plan: Blend into the audience during one of the president's public speeches. Approach a random person and whisper "Kill the first lady, pass this along" into their ear, hoping that someone down the line will get the message exactly as it was first whispered and act on it.

Where It Went Wrong: Berklin was a deaf-mute.

The Plan: Concentrate really hard, tapping into the "hidden powers" of the "alien-engineered human mind" to erase Lyndon Johnson from reality.

The Plan: When no one is looking, replace Air Force One with several thousand blocks of C4 stacked in the approximate shape of an airplane. Wait until the president climbs aboard, then activate the remote detonator.

Where It Went Wrong: The C4 airplane flew out of range of the detonator's signal too quickly.