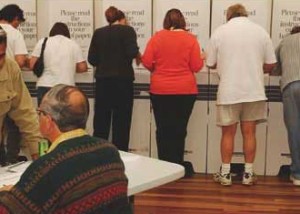 A picture of democrazy in action. Hehe. As we approach election day newspapers throughout California are printing op-ed pieces that reflect the local interests of their readers (i.e. whatever agenda the media company that owns them wants them to print). Especially of interest are California's wacky propositions that only serve to further convolute our state's laws, creating a rich tapestry of contradictions and confusion that rivals the Holy Bible.

2008's ballot measures are a doozy. There are the usual suspects, initiatives that sound really good but really only benefit the ghost of Hitler, extravagant bonds that pay for kind of useful crap, "think of the children" nonsense, and the "parental notification" one that's going for a three-peat defeat. Then there's the anti-gay marriage one which appears to have taken home Best of Show this year. Come on guys, can we argue over a different ballot measure for five damn minutes? Jesus.

With so much crap being peddled by the people of this silly state it's hard to sort out the awful propositions from the really awful propositions. What is a voter who just wants to get back to playing Fallout 3 to do?

Why, the only thing you can do. Turn that brain off, print out this page, and bring it with you when you go to the polls on Tuesday. Don't just vote the wrong way, vote the goon way. Here's a rundown of California's ballot measures and how you should vote on them. 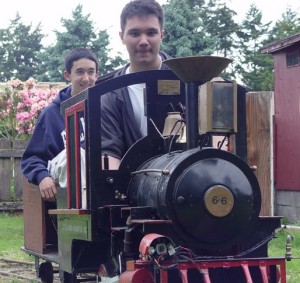 California High Speed Rail will eclipse the current rail speed record in California held by the locomotive seen here.If you've ever thought about becoming a homosexual, there's no better way to start than to vote yes on Proposition 1A. Trains are gay, and gays love trains. The No On 8 campaign and the Yes On 1A campaign should join forces and redefine what a train going through a tunnel really means (anal sex involving two men by the way). What better way to celebrate your legal homosexual marriage than with a romantic trip on the high speed rail to San Francisco and a quickie in the bathroom at 220 MPH?

Now I know what you're thinking. "Ten billion for trains? Those things still exist?" When most people in America think of trains they think of crummy old Amtrak. Well, the high speed rail network in California will do several things that our current railroad network doesn't.

"But public transportation..." you say, "Isn't that for illegal aliens from... Mexico???" No, see, that's the beauty of high speed rail. Manny from East L.A. is priced right the hell off the train! Unlike mass transit, high speed rail makes an operating profit in countries like Japan and France. There's no reason it won't in California, especially considering brown people like me won't be able to ride it. That's a win-win for everyone.

No illegals and plenty of man ass. What's not to love? Unfortunately someone had to show up to rain on our 10 billion dollar parade. The bulk of the opposition comes from The Reason Foundation, a libertarian think tank that writes in complete sentences and uses proper grammar, so instead of refuting their claims I'm going to cherry pick some retarded comments from the Internet.

There is nothing faster in life than a high speed train.

Come on, FreeRepublic! This train will be 100% white! You're going to love it!

Unfounded fear mongering. The staple of any good election.

Prop 1A will create jobs, NIMBY drama, and cure cancer, the cancer that infests our transportation infrastructure in this state, that is! Go ahead and vote yes on 1A, because lawsuit after lawsuit is just going to kill it anyway.