The Fracking Fables of Groggery Gibbonman

"I saw him through my father's bedroom window, as grand as any picture on any dust-jacket. His long arm whipped through the air, his famous crooked cane clanged viciously against the metal cylinder. It was Old Tirade himself, Groggery Gibbonman, face red, screaming of how this turtle had wronged him."-Diary of Queen Jacqueline I 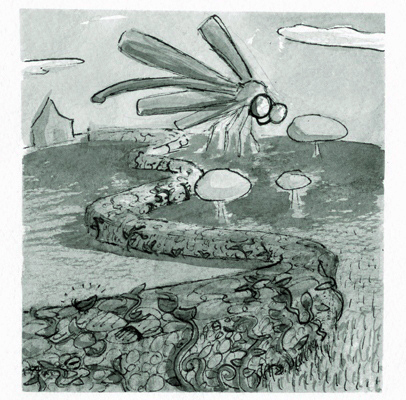 Ages ago or maybe more, on a vine that grew along the crags of a crumbling stone wall, there was one leaf that was not a leaf, though this was not known to everyone. It was a secret the leaf kept to itself, being a leaf-bug, whose identities are closely guarded things.

And for good reason. For on many days, such as this one, a terrible dragonfly beat his wings up and down the length of the stone wall, looking for unfortunate bugs to eat. The leaf-bug stayed ever still.

When the dragonfly landed near the leaf-bug and tasted at the air with his big ugly mouth, because he just knew there was food there, the leaf-bug stayed even stiller.

And when the dragonfly inched closer and closer to the leaf-bug, sniffing and considering, almost upon him, the leaf-bug stayed stiller still.

It was at this moment that the old stone wall, which had stayed the stillest of them all, snapped the dragonfly out of the air with a crunch. He chewed the papery bug thoughtfully with round stone teeth. The grateful leaf-bug patted the wall-bug's back.

The moral of the story is: It's tricksters all the way down. 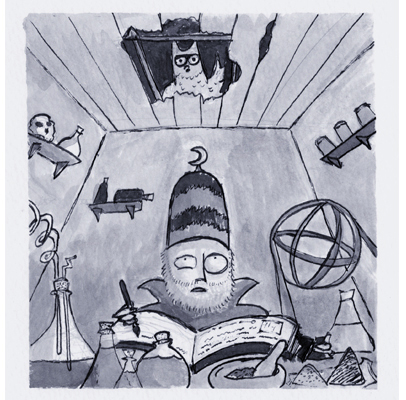 Certainly no less than long ago, there lived a devoted alchemist whose skill with potions and reagents was legendary. His hermitage high in the wooded mountains afforded him naught but privacy and time, and these things he treasured, for his work was his obsession, and obsession is a lonely trade.

The alchemist was gifted indeed: He could move rust from one piece of iron to another, and make stones dance on tabletops. But he was not content with these accomplishments. He'd set his sights on the loftiest goal in his field - the transmutation of base metals to gold. Nothing less would satisfy.

The alchemist worked day and night, failure after failure. He pored through dust-logged scrolls, communed with mystics, and purchased secrets from beggars and sell-swords, but it was all to no avail.

Finally, exhausted and raving, the alchemist cried out to the heavens: "What is the secret!? What key unlocks the mystery of the yellow ore!? I beg of God and nature answer me this, or I shall go mad!!"

An old owl, who until then had sat unnoticed high in a tree above the lamenting alchemist, now hooted her thoughtful reply. "Fret not, mountain man, for I can tell you the secret, hoo hoo" said she, and upon hearing it the alchemist jumped for joy.

"Then teach me, oh sage old owl! Teach me nature's trick of turning lead to gold!"

The owl flapped her great wings, descended from the tree to a hole in the roof of the alchemist's cabin, and arranged her feathers matter-of-factly as she explained. "It's simply a matter of getting enough energy to make lead atoms shed three protons," she said. "We'll need ten miles for track and electro magnets, hoo, and some 50 megawatt pulse klystrons, hoo. How are you at grant writing?"

The alchemist, whose hastily scribbled owl-notes contained no words he recognized, could not answer. A pallor came over him as he realized he had surely gone mad, and as the nonsense words writhed through his head he stripped naked and ran into the woods, weeping and laughing at once about "electric maggots" and "Adam shedding pontoons."

"How dreadfully rude!" said the owl, and she flew off in a huff, telling all the other animals to keep the secret of how to make gold to themselves from then on.

The moral of the story is: You don't get a 2nd chance to make a 1st anachronism. 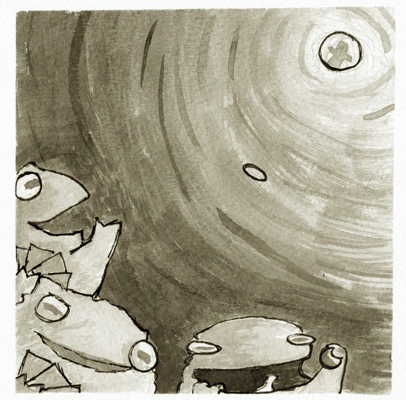 However much a while ago you may please, there lived a rancorous trio of toads. Wickedly clever toads were they, and pranksters of the highest order! Each day they'd hatch their schemes at the bottom of a wishing well.

One day a traveler stopped to fill his waterskin at the well. He threw a copper coin down into the water, smiling at the distant plop it made, and had just wished silently for a great fortune when something came hurtling back at him.

"What's this!" said the spry traveler as he snatched the pebble midair. It was a shiny black pebble no bigger than a bean, and still wet. A croaking voice followed up the well.

"Thank you for your business!" declared the voice loudly, above the other toads' shushes and titters. "That's one toad coin for one copper, standard exchange."

"Toad coin?" wondered the traveler aloud as he examined the pebble. It was mostly smooth but for one patch that was nobbled with a little chip, which is to say it did not look all that different from any other pebble, really, and certainly nothing like a coin.

"What manner of coin has no head or tail, bears no seal or flag, and is inscribed with no amount? Who backs this toad coin, the toad bank? Or the toad treasury!?" The traveler laughed, but the toads croaked sternly back at him.

"Do not be foolish! The king's coin has no real strength, it can be forged! Counterfeits flood the streets! But a toad coin is unique- have you ever seen one exactly this shape?"

The traveler had to admit, he had never seen a pebble exactly the same shape as this one, for all pebbles were unique. So he threw in a silver coin, receiving another pebble.

"Just one toad coin for a silver, the same as for a copper a second before!?" he balked.

"The exchange changes fast!" the toads giggled back. "But now you have two silvers' worth, 9 coppers' profit! And nobody else can have that same pebble, so it's utterly safe!"

"But what's to keep my toad coins from losing their value overnight?" asked the traveler.

"What's to keep your toad coins from gaining in value overnight!?" rebutted the toads.

The traveler, his concerns satisfied, emptied his pockets into the well, striking the toads with heavy gold coins and killing them, and shortly thereafter starved to death himself.

The moral of the story is: Be careful what you wish with.