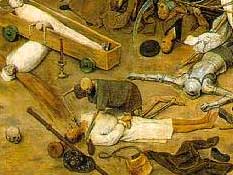 These people are mostly all dead. I don't think their deaths will be avenged though, since skeleton warriors are scary and how do you kill something that's already dead? Like Dick Clark?

If there's one thing I've learned from watching network television, it's that I'm quite unattractive and need to do various things to my body and face or else celebrities will not invite me to their swank Hollywood parties where at least six of the partygoers have a direct shuttlebus to The Betty Ford Clinic. Wait, that's not what I meant to say. If there's one thing that I've learned from watching network television, it's that I cannot lead a happy and fulfilling life without the aid of some new miracle drug that sounds like an alien race ("Glaxtonia," "Desroxipanopian") which allows me to see every hue of color brighter while I run through fields of flowers and push my children, who I don't have, on a tire swing, which I don't own. Ugh, just one second, I didn't intend to write that either. If there's one thing I've learned from watching network television, it's that there will always be hope for a peace treaty between Israel and Palestine, so each time I hear a news report about 38 pregnant babies getting blown up by a suicide unicycle bomber inside a yarn factory, I should still remain "optimistic" regarding the inevitable peace between these two bickering, bitchy neighbors. Dammit, I messed that one up too. Okay, let me try to start over again.

As network television has told me time and time again, one day I'm going to be dead. Death is a sudden process in which a person ceases to live, meaning that person can no longer breathe, eat, or write hate-filled posts on an X-Box forum. There really isn't much to do once you die, especially since you'll be underground and the only thing you can do buried beneath 10 feet of dirt is hum various sitcom theme songs (which you cannot do because you're dead). You can't even blink when you're dead! Or listen to AM radio! Sure it's a crappy deal, but a select few of you who have sent a lot of money to the "correct" church will soon find yourself whisked away to Heaven. This is a glorious place where all the big church donation people go once they fail to continue living, a magical and wondrous place not unlike the moon! Only except of moon rocks there are fluffy clouds, and instead of killer aliens there is Jesus, and instead of an American flag there is Jesus too. There are no icky minorities, foreign people, homeless bums, or other non-desirable non-Caucasians. Just a bunch of fancy, rich, bald, fat white guys walking around like it's a Joe Don Baker tryout audition. Okay, maybe that's a bad example, but you see what I'm saying here. 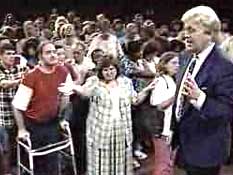 Unfortunately, I am not going to Heaven. I haven't chosen the "correct" religion, I've failed to bribe Jesus with donations, and I've broken all 17 Commandments in no particular order. Also my body is starting to take on the shape and appearance of baseball legend John Kruk, so the weight limit would probably be exceeded if they ever let me into Heaven. Most of you people reading this will not be allowed into Heaven either, for various reasons ranging from your ugly face to the fact that you are simply reading this website. Think of Heaven as an exclusive dance club and we're all the corn-fed visiting country schmucks waiting in line to get past the 600-pound bouncer with a colorful name of "Rocko" or "Biff Armstrong." There's no way in Hell we're all going to get in unless we slip the big guy a few bucks.

Now since I cannot get into Heaven, I will more than likely end up in Purgatory for all eternity or even worse, get reincarnated as Louie Anderson's sofa. Purgatory is like sitting around in a doctor's waiting room forever and ever (that is a long time) except there are no magazines to read and all the potted plastic trees are missing. So it's either this place or that other place with the fire, burning, itching, and swelling. With this in mind, I have begun thinking about having my inevitable death avenged. Since I'm not able to slip into Heaven, there's no penalty for demanding various people in my life to avenge my death. However, after some lengthy research that required me to both get up AND use the bathroom, I have come to the conclusion that there are an awful lot of ways for me to die. I thought of at least six when I was simply using the bathroom, and I would've probably came up with more if my fiancé hadn't started whining about how I'd been holed up in there since 8:00 am. I have written down a list of the most likely ways I could be killed, and I am putting this list up so that the parties involved will know their desired roles once my heart stops beating and the spirit of rock and roll leaves me forever. Please take careful note of the following possibilities, perhaps even using a Magic Marker to underline your favorite ones by drawing directly onto your computer monitor. Go ahead, do it, that stuff washes right off.

LIST OF MOST POPULAR WAYS I MIGHT BE KILLED, AND WHO SHOULD AVENGE MY DEATH
COPYRIGHT 2002 BY RICH "LOWTAX" KYANKA'S PASTRY AND ROADSIDE ASSISTANCE CORPORATION 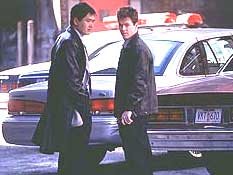 A picture of me and my partner on the Police force. I am the handsome guy on the right.

1) Killed while trying to uphold the law.

HOW TO AVENGE MY DEATH: You must be my partner in the Police force. I am not currently a Police officer, but I do watch the show "COPS" a lot so I'm fairly close. Also a friend of mine almost got arrested once for throwing oranges out of the back of a pickup truck. If you do end up being my partner, I fully expect you to become a vigilante cop who's driven mad with rage and is only able to focus on killing the criminals who murdered me. You must be willing to ruin your love life, give up all hobbies and pastimes (ie, building model boats or gardening), and sever all bonds of friendship with everybody else in your life once you have begun the process of avenging my death. Oh yeah, and you have to start wearing a lot of black and refuse to shave your beard stubble while staying at cheap motels that, for some unknown reason, have a 5,000,000-watt neon flashing sign installed outside every window.

2) Killed by a drunk driver in a terrible, fiery, overly dramatic car accident.

3) Killed by burglars who break into my apartment and accidentally murder me when their crime goes wrong.

HOW TO AVENGE MY DEATH: I will become a ghost and haunt my apartment while you do all the paperwork and planning to somehow trick the burglars into coming back and staying in my apartment for one night. At that point I will start to haunt the hell out of them. I'll start by casually moving stuff around, like vases and paintings. That will really get them spooked. Then I'll put some really scary stuff behind their backs but they won't be able to see it and will be essentially useless unless somebody for some reason is pointing a camera at them from in front. When they turn around, poof, it will be gone and they will have never seen it! That's how scary it will be! If they don't die from heart attacks by midnight, I'll just give up and ask you to stab them to death for me. 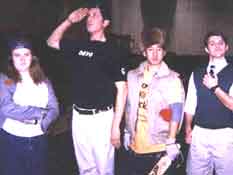 I found this image while searching for "anarchy." I think the Google Image Search still has a few bugs to be worked out.

HOW TO AVENGE MY DEATH: Since nobody in particular was responsible for my death in this case, I expect you to direct your rage at society as a whole. Release your anger and avenge my death by doing things which will tell "the man" that you are, in fact, releasing your anger and avenging my death. Some will call you a criminal. Others will call you a madman. However, you are none of these; you are simply a criminal madman who is avenging my death by doing such antiestablishment things like loitering, jaywalking, putting in 50 cents to buy a newspaper from the newspaper box and then actually taking TWO of them instead of one, pressing all the floor buttons on the elevator and then running out, and talking really loud on your cellphone during movies. This may not avenge my death, but it will probably add a little bit of "zing" to your life and failing marriage.

HOW TO AVENGE MY DEATH: As all men across the great fruited plains of the Pacific Ocean know, the woman is always evil. That's one steadfast rule that applies to every aspect and facet of life: the woman is always evil. If you're a rich old oil tycoon and you inexplicably die in your sleep, you can bet your filthy Texas dollars that your wife was the one who spiked your arsenic with deadly Diet Pepsi. If your wife or girlfriend or lover asks to be put on a joint checking account with you or casually mentions that she would like to be listed on your will, it is because she plans on killing you. Why? Because the woman is always evil. I would like to take this moment and publicly announce that if I ever die, no matter what the cause of death might be, it was because my fiancé / wife murdered me somehow. Upon a successful death of her significant other, the woman immediately puts on dark sunglasses, gets into her convertible, and drives off to move in with her cheating lover. They begin laughing a lot, often in oddly-lit rooms, and move across the continent to do really evil things like trade stocks or play tennis. In this case, Tommy Lee Jones should immediately spring into action and begin the procedure of avenging my death since Tommy Lee Jones is always the guy who runs around the entire nation chasing people (with the possible exception of "Space Cowboys," in which he played the role of a depressing man with cancer that annoyed his fellow astronauts so much that they dumped his whiny ass onto the moon). Tommy Lee Jones would hunt them down, state by state, until he finally confronts them in some expensive office owned by the cheating lover. Jones would act all charismatic and confident as he usually does, causing the cheating lover to pull a gun on him and start shooting. Fortunately, nobody in the history of the universe has ever been able to successfully hit Tommy Lee Jones with a bullet, so the evil guy and his evil woman get arrested and are sentenced to about five months of jailtime. Then there is a sequel and the part of Tommy Lee Jones is played by Emilio Estevez, assuming he is still alive.

These are my top five ways I could potentially meet my demise, and I'd like you all to be prepared and know the correct procedures once I'm crammed into a rectangular ditch full of dirt and those really gross grub things. I hope that avenging my death will be quite an experience for you, one that will make you learn, one that will make you love, and maybe, just maybe, teach you a little something about yourself. God bless you all (even if you're not going into Heaven)!