The Day the Sandwich Fought Back 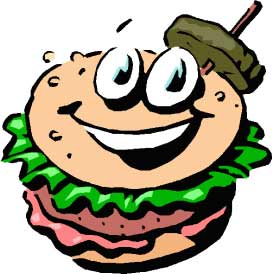 Behold, for this is the gaping maw of hell!It was just another average rainy day when I woke up. It was the afternoon. 12:01 to be exact. Having just crashed in bed a few hours earlier, I didn’t feel all that well rested. Regardless, I got up out of my bed, stepping on a cold floor littered with laundry and all manner of papers. Instinctively I grabbed a pop out of the fridge and sat down at my desk to get some work done. And by work I of course mean writing my epic science fiction masterpiece about a group of rebels confronting an evil galactic empire led by the tyrannical Darth Vader. It's my greatest and most original idea ever, so I like to put as much time into it as possible.

No more than fifteen minutes after I started working I realized something. By the Power of Gray Skull, I was hungry! At first I ignored this internal development and pressed on with my important work. But before long I could no longer avoid it. I was hungry and there was only one way to fix the problem. I went downstairs and began looking around for food. I searched high and low and at times eye level for anything I could quickly eat. But alas, the house was filled with sealed cans, uncooked meats, and various powders. I could do about as good a job forging these items into edible food as I could forging them into a massive statue of Adolf Hitler battling Moses while wearing one of those power loaders from the movie Aliens. I realized that I had no options. No options except to cook food, but I was too damn lazy to do that.

I tried to continue without food, but I was really freaking hungry. Even worse, I couldn’t concentrate on anything other than the fact that I was really freaking hungry. I then thought that maybe I had missed something and began re-exploring my dining options. I happened to notice a loaf of bread, and a fridge full of lunchmeat and various condiments. On their own, these items were practically useless. Together, however, they combined their powers into one action packed assault against hunger. I could make a sandwich. Better yet, I could make the best damn sandwich ever made!

I retreated back to my room momentarily to plan my next move. Carefully I calculated all the components that would go into this mealtime masterpiece. I thought about the bread I’d need. Two slices, I figured. I thought about the meat, the condiments. All of these variables indicated I was on the verge of a massive undertaking, but this time the motivation was there. This was going happen. I was to be a regular Neil Armstrong taking that bold step onto the moon that was my empty stomach, except instead of walking on it I'd be filling it with food. I'm not sure what I just said, but don't get the idea I want to eat Neil Armstrong!

A few hours later, I finished the final draft of my sandwich blueprints and began the business of turning my words into reality. I assembled my assets in a logical fashion around me and carefully began my work. With an artist touch and a t-square I arranged lunchmeat at perfect right angles with the corners of my bread while gracefully spreading just the right amount of condiments atop this work of art. Every aspect of this sandwich was to be carefully planned and calculated, as to insure a maximum overdrive of taste and hunger satiation! I'd failed at a lot of things in life, but this sandwich wasn't going to be one of those things.

Before the sun had set I was finished. I carefully closed my sandwich off, locking a world of tastes between two slices of wheat bread. I smiled and congratulated myself on a job well done. After the amount of blood, sweat, and tears I put into it, I almost hesitated to eat it. It still smelt fresh, almost like it was alive – alive, and selflessly crying out to be eaten. I won't deny that I trembled, that I almost couldn't do it. The sandwich was my child, my firstborn. I couldn't exactly eat it anymore than a mother could eat her offspring. But ultimately I knew that I would make a horrible parent, and so I put my emotions aside.

Police sketch artist's recreation of the beast.I bit into the sandwich and it was everything I had hoped for. Truly, it was the best damn sandwich ever made. Each bite was a taste explosion as mayonnaise, meat, and everything else I piled on sung together in a sandwich chorus. This sandwich was the closest thing to tasting enlightenment that I could think of, short of maybe biting into the bowels of Jesus. I kept eating it, and before long it was a shadow of its former glory. With the last bite, I concluded the short but noble life of my sandwich. I almost felt like mourning it, but I knew in my heart that it had gone to a better place.

Just as I was about to return to my work, something happened. My stomach seemed to reject the offering I had given it. The discomfort grew as each minute passed. Before long it was more distracting than the hunger that had plagued me earlier. The world slowly transformed into a black hole, sucking me towards unknown territory. Giant blobs of sweat surfed across my forehead, hanging ten around the curves of my face. It was hot, burning hot. I may as well have been inside an oven or squeezed tightly between the inner thighs of Richard Simmons. “What’s happening?” I screamed in my most manly girlish shriek. My stomach raged in woe, violently erupting like a volcano god angered over an insufficient sacrifice. The sandwich had been reborn as a fiery phoenix rising from the depths of my innards to great heights of disarray. Moments later I was staring face down into a toilet, spitting up the sandwich I surrendered so much for. My only consolation came with each monumental flush. A vortex of liquid salvation whirled the sickness around and delivered it far away.

Somewhere between the gagging sounds of me vomiting and the hurricane sounds of a flushing toilet, I started to fathom what might have occurred. As an eternal pessimist, it didn’t take long for me to think of a valid reason. Slowly, I made my way to the fridge. I opened the door and the light temporarily blinded me. As my eyes adjusted, I stared down the jar of mayonnaise and bared witness to a dire admonition. The mayonnaise had been spoiled! The expiration date read like the markings on the tombstone of a loved one. Dead! Buried! Forgotten! It was the mayo! My life would never be the same again.