Fallout From The Cardinals/Reds Brawl 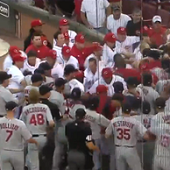 This week the Reds and Cardinals were involved in the most chaotic and brutal baseball fight in recent memory. One guy was even kicking.

After reviewing the fracas from every possible angle and possibly using "zoom and enhance" supercomputers, MLB officials have handed down some severe punishments for everyone involved.

Johnny Cueto (Pitcher) suspended eight games for sliding a Cardinal across a bartop, through dozens of bottles and glasses before crashing headlong through a large plate glass window. The suspension would have reportedly been six games if he hadn't held his opponent in a headlock while walking from the stadium to the bar over ten miles away.

Dusty Baker (Manager) suspended three games for reaching over a protective wall and petting the elephant.

Brandon Phillips (Second Base) suspended ten games for running in circles and shrieking while on fire.

Mr. Red (Mascot) suspended indefinitely for using a cell phone to send a photograph of his engorged penis to Brett Favre.

Russ Springer (Relief Pitcher) suspended two games for repeatedly doing cartwheels through the brawling mass in a desperate bid for attention, his face lit up by a beaming smile.

Joey Votto (First Base) and Jay Bruce (Right Field) and Carlos Fisher (Relief Pitcher) suspended twenty seven games for engaging in a Mexican Standoff with one another throughout the entire fight, their guns (a revolver, shotgun, and rocket launcher) making reloading sounds each and every time they dramatically trained their guns on someone else.

Ryan Hanigan (Catcher) suspended sixteen games for using a severed human head as a weapon. An appeal has already been filed, as the head turned out to be Hanigan's. 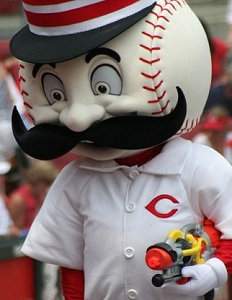 Jim Edmonds (Center Field) suspended three games for getting a 101-hit juggle combo by backing his opponent into the corner and spamming his leg sweep attack.

Scott Rolen (Third Base) suspended fifty games for pinching nipples really hard and not letting go when victims squealed, "Time out, time out!"

Yadier Molina (Catcher) suspended eighteen games for perfectly imitating the Wilhelm Scream every time he was punched in the butt, which was a lot.

Felipe Lopez (Third Base) suspended one game for letting his helmet fall from a shaky hand, dropping to his knees, and contemplating the futility of man's aggression in this remarkably short life.

Evan Rude (Bat Boy) suspended twelve games for piloting a tank on the baseball field without a proper license.

Matt Holliday (Left Field) suspended thirty seven games for poking an opponent's eye and hitting him with a steel chair when the referee was distracted, then getting the pin for an easy victory.

Albert Pujols (First Base) suspended nine games for giving a rousing speech on horseback, to his horse, while cutting down his own teammates with the dread sword Dragnipur.

Colby Rasmus (Center Field) suspended half a game for doing all sorts of crazy kung fu moves while suspended from a wire harness, completely ruining the effect for most of the Western audience.

Pete Prinzi (Strength And Conditioning Coach) suspended forty games for lying to congress when he testified that he would stop punching them very soon.

Jon Jay (Right Field) suspended five games for hitting everyone with an unrealistic amount of arterial spray after his arm was pulled from his torso.

William DeWitt Jr. (Owner) suspended one hundred games for laughing menacingly while surrounded by beautiful women as seedy dudes in suits bet fistfuls of money on the action below.

Jeff Kellogg (Umpire) suspended ten games for walking away from an explosion while sliding a pair of sunglasses on his face, then exploding in an even larger fireball.

Michelle Beadle (Fan) suspended three games for attempting to start "the wave", then inflating a beach ball and tossing it into the crowd.

Garrett Lankens (Pretzel Vendor) suspended eighteen games for discovering a very old pretzel at the bottom of his tray, glancing about to make sure he wasn't being watched, then using the hardened treat to comically bonk two baseball players over their heads as they were engaged in fisticuffs with one another.