Ben Affleck As Daredevil Will Be A Terrible Batman

Ben Affleck will be playing Batman? You have to be kidding me. This is the worst thing that could possibly happen on planet Earth. Anyone who has seen Daredevil knows that getting Ben Affleck to play Batman while in character as Daredevil is a huge mistake. We've been waiting so long for a proper Batman/Superman movie, and now it's doomed.

First of all, Daredevil is blind, and Batman can see just fine. In fact, I'm pretty sure Batman has perfect 20/20 vision. Remember how Ben Affleck's Daredevil costume actually covered his eyes? That won't work at all for Batman! He needs to see what he's doing, to stare evil in the face and wear shoe polish on his eyelids. If Affleck thinks he can portray Batman as a blind superhero, he's in for a rude awakening.

Ben Affleck used a stick as a weapon when he played Daredevil. NO. God damn it. This is all wrong, Ben Affleck. Batman doesn't need to use a stick. He is a formidable hand-to-hand fighter. The guy can punch a dozen henchmen, punch a dog, punch a super villain, punch other people - basically anything the situation calls for.

A stick is shit. If something can't be resolved via the punching method, Batman has access to an unlimited arsenal of amazing futuristic gadgets that would make a stick look like a simple length of metal or wood. Ben Affleck is seriously pissing me off with this Daredevil stick of his. It's like he's not even trying to be Batman.

Batman's costume is mostly black. This is because 1. Black is harder to see at night, so Batman can get the jump on criminals and 2. Black is the natural color of actual Batmen so it is thematically consistent. When Ben Affleck was in costume as Daredevil he wore red. Head to toe, red. That's not even close! No one is going to recognize this guy as Batman if he's wearing that red Daredevil costume! Don't even get me started on the lack of a cape, or the iconic bat logo. 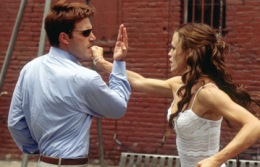 I'm a forgiving man. It's true. I'm a little worked up right now because I'm passionate about Batman, but if I cooled off I'm sure I could look past most of these quibbles and accept the film for what it is. There is one aspect of this casting choice that is simply unacceptable, however.

Daredevil is named Daredevil. Think about how many times someone said "Hey Daredevil" or "Yo Daredevil" in Daredevil and Ben Affleck nodded back or waved. Hundreds of times. Maybe thousands. It's basically all I remember from that movie. That will not work in the Batman/Superman flick. Batman is named Batman. If every character is going to refer to Ben Affleck as Daredevil, what's the point of calling it a Batman movie? This is such an obvious flaw. How did this slip past the casting agent, the director, and everyone else involved in the production of this doomed movie?

It's obvious that Daredevil was not a good movie. Even so, I find it deplorable that Warner Brothers and DC Comics would poach Ben Affleck's performance of a Marvel character for a portrayal of Batman. If this isn't an open admission that both companies are desperate in the wake of Christopher Nolan's departure, I don't know what is.

Stand with me! Let us band together, and allow our voices to be heard! Let's tell Hollywood in no uncertain terms that we want Batman recast, and that we want him to be played by Jeremy Renner as Hawkeye!