What Is The Meaning Of This Face?

Today's update is mostly about this face. 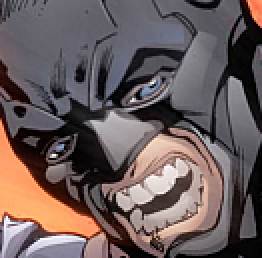 We will also talk about another face later on, but for now I'd like to focus on this remarkable face. It does not belong to a microcephalic lucha libre wrestler or an especially unkind caricature of legendary Broncos quarterback John Elway. You're looking at the face of Batman. This panel appeared in DC Comics' Injustice #17 and was kindly (?) shared with the Something Awful forums by user Matlock. (As a sidenote, the Funny Panels thread is an essential bookmark.)

Now, back to the face. What expression are we looking at, exactly?

Laughter? We could be catching Batman just moments after a humdinger of a joke. Maybe it was Alfred cracking wise about Bruce Wayne's personal life. Here Batman is yukking it up, laughing with a hearty braying "HYUK HYUK!"

No, not laughter. Looks like Batman might be in the middle of a sneeze. He made the mistake of holding one in a few minutes ago, and it's just been burning his nasal cavities. Now it's finally coming out in a mixture of relief and discomfort.

Maybe the caped crusader is going in for a big bite of a mondo burger. "It's got pickles!" he excitedly thinks to himself as he lowers his gnarling face toward the tasty treat, fueled by voracious appetite.

Oh man. What if we're witnessing something tragic? Batman is in the vacuum of space, asphyxiating even as his body contorts in unspeakable ways. He gasps for air but all he finds is the certainty that his face looks ridiculous.

We might get a better idea of what's going on if we zoom out a bit. Let's see the full picture. 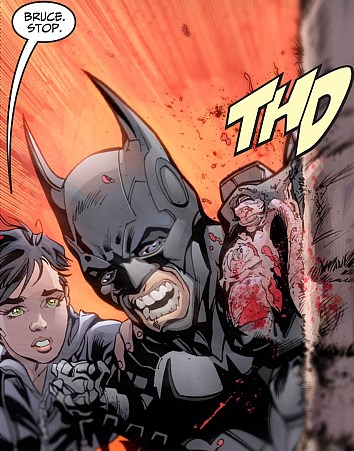 Yes, Bruce. Please stop absolutely everything that you're doing. While you're at it, promise to never do any of it again.

So, I'm still not entire sure what's going on here but it seems like Batman might be angry and maybe a little sad as well. Both are perfectly natural reactions to realizing that one of your arms is significantly smaller than the other. That doesn't mean you should just go around punching pube-coated cardboard tubes so hard that you bust up your own hand, though. Batman always struck me as an exceptionally smart guy, so this is out of character. Maybe there's more to the story.

Are his eyes simply huge and blue with no pupils and very little white? Or are we looking at two big old blobs of tears welling up and obscuring Batman's actual eyes? Is there a super villain that might have done this to him? I feel like there might be characters named Sob Story and Onion Stank and they were planning to take over the internet and television so they could constantly play the 1971 tv movie Brian's Song but maybe my brain is just making that up.

Get a load of those chompers. Holy moley. I can't tell if that's one enormous and dented tooth on the top and one on the bottom, or if Batman has a mouth full of enormous teeth that point in random directions like the broken bones of the most recent dead Robin. Maybe he has perfectly normal teeth but he just stuffed an apple-sized marshmallow in his mouth and hasn't quite finished chewing it up.

Sadly, this Batman face poses numerous questions and provides very few answers. Try not to think about it too much. Otherwise you might react like Catwoman. 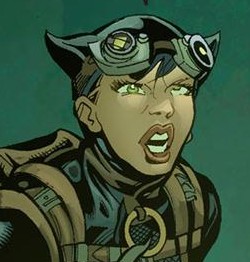 This face comes to us courtesy of forum user Gavok. Thankfully, the explanation for Catwoman's expression is quite clear. She has just discovered that her anti-perspirant has been laced with catnip.

Wait, maybe she finally got around to playing Arkham City and just reached the part where every bad guy calls Catwoman a bitch that they want to rape?

Or she could have just stepped on something that really surprised and hurt her. Like a picture of her outfit.