Be He Alive or Be He Dead 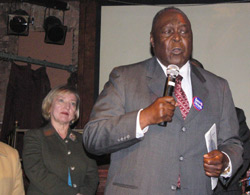 Stroger during possibly alivier times.Local politics tend to be boring. Even in Chicago, where public officials are often accused of being in the pocket of organized crime and unions (essentially the same thing here), local politics tend to be boring. Then a hotly contested democratic primary for the presidency of the Cook County Board of Commissioners ended with the world's first undead politician winning his reelection primary.

On March 14th, only a week before the 2006 primary election, president of the Cook County Board of Commissioners John H. Stroger Jr. suffered a stroke and was taken to the hospital. Stroger was polling poorly and many suspected the stroke was a publicity stunt to win the sympathy of voters. It was also believable, as Stroger suffered from diabetes, high blood pressure, prostate cancer and he has had a quadruple bypass. Stroger released a statement stating that he was on the road to recovery. The primary election went off without a hitch and Stroger defeated challenger Forrest Claypool.

That was over two months ago. Stroger has not been seen or heard from since. In fact, no video, photos or audio has surfaced of Stroger after his stroke on March 15th. It seems that Stroger may have managed to win at least a primary election while pretending to be alive.

Dead politicians have been elected to office before. Former Attorney General John Ashcroft famously lost a bid for Senate reelection to Mel Carnahan. Carnahan was killed in a plane crash two weeks before the election and won anyway, proving that Republican murder conspiracies don't always work out as well as cutting the brake lines on JFK Junior's Cessna.

The differences between the Stroger and Carnahan situations are that Mel Carnahan admitted he was dead before the election and then did not try to serve after he won the election. His wife took over when Mel graciously bowed out, citing his increasing state of decay as a primary factor. John Stroger has adamantly denied being deceased and as recently as Thursday his supporters called someone a racist when they demanded that Stroger prove that he is still alive.

"There's always a double standard when it comes to black folks and white folks. Old man [Richard J.] Daley had a stroke and was off for a year. Nobody said one word. They were even afraid to whisper that he was sick around here," Beavers said.

Of course, during that year old Pa Daley could actually demonstrate that he was still alive, but I tend to agree with Alderman Beavers. It's those damned breathanistas, always discriminating against the dead. Dead people can't buy houses, can't get jobs, can't vote (except in Chicago) and probably can't hail a taxi, all because The Man is holding them back.

While I have certain sympathies for the undead - I like to call it "the live man's burden" - I also have to feel a bit embarrassed that Stroger is continuing with his whole "I still have a beating heart" charade. Maybe if I can offer enough evidence that Stroger is dead he will just come right out and admit to it. Then we can all breathe a collective sigh of relief - well, everyone but Stroger - and then we can move on with the business of running Chicago for the mob. I don't want to make this too one-sided though, so let's start out by looking at the evidence that Stroger is alive. 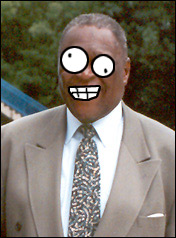 His son says that John Stroger is alive.

There hasn't been an obituary published in a newspaper.

No one has officially withdrawn his name from the final election ticket.

Not a lot there, but as a solipsist I may not be the best judge of circumstantial evidence. Let's get the other side of the story. 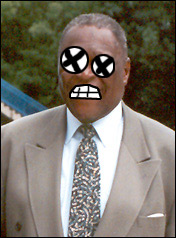 When Stroger suffered his March 14th stroke he was wheeled to the ambulance in a full body wrap. No part of his body was visible. How many movies have you seen where a live patient is wheeled out to an ambulance covered by a sheet?

Stroger was taken to Rush University Medical Center instead of, oh, I don't know, maybe John H. Stroger Jr. Hospital. Perhaps it's because he knows loose-lipped people at the hospital that has been named after him. That's purely speculation, of course.

No image exists of Stroger being alive since March 14th. I have not even seen a painting or daguerreotype of Stroger. Not even Stroger in a coma. The same goes for audio recording of Stroger. This guy is less accessible than Bin Laden, and Stroger's supposedly still running a campaign (the non-primary is in a few days) and holding a public office.

To my knowledge the condominium is not being leased in Stroger's name, which leads directly to…

Stroger's house was sold by a real estate company on May 25th. I guess that makes sense what with that condo someone else rented and moved him into without anyone else noticing.

If Stroger can win the general election while maintaining his alive status, odds are good that his seat would go to his son (Alderman Todd Stroger) when it becomes apparent Stroger is actually dead. Like when his arm rots off in the middle of a meeting.

No identifiable doctor has recently listed Stroger's condition as "alive", possibly because nothing is more professionally embarrassing to a doctor than declaring a dead body to be alive.

I cannot state definitively that John Stroger is dead, but I find it highly suspicious that no one can state definitively that he is alive. It's quite an unusual predicament for a politician about to face reelection. If Stroger's luck holds as it did during the primary, we may just have our first undead president sitting on the Cook County Board of Commissioners.