Tales From the (Child)Hood, Part II

Everyone likes childhood stories, or at least nobody seems to hate them enough to threaten me with serious physical harm, which is just as good as liking in my book. Storytelling is one of those things that makes us way better than other animals, so after you read these you can run up and yell "BOOYA" at your pets if you feel like it.

One afternoon in junior high we were in class discussing baby names, and this kid with glasses who sat in the back and never talked suddenly blurted out that he thought a good name for a baby would be Lucifer. This made some girl start to cry and she ran out of the room, which made a few people laugh. Then the kid with glasses started to cry as well, and that made everybody laugh.

A year later I was in high school and I sat next to Marco in a basic computing class. I thought that was kind of odd because he was a senior and probably shouldn't have been taking a freshman-level class unless he was really dim or something, but there he was. He used to talk about this girl he liked whose last name was Rocha, and for some reason I told him I knew a girl named Bea who liked honeybees (I didn't really), and that this Rocha girl probably liked roaches, so he should draw her pictures of roaches and make her a roach broach and other things like that. I was just joking around to pass the time. A couple months passed and on the first day back after Christmas vacation he asked me if I could help with something, and he pulled out from his backpack a plastic Wal-Mart bag with roach traps in it. I explained that I was just kidding but I think in the back of his mind he still thought it was a good idea.

Early before school one morning, a mattress was found left by someone in the student parking lot. A hillbillyish senior named Doug, notable because he had possessed the ability to grow a thick and luxurious beard since he was 16, went and got some rope out of the back of his pickup. He tied one end to the mattress and the other to his bumper, and took the whole thing for a spin around the block before school started, hooting and hollering out the window the whole way. The bell rang so I have no idea what happened to the mattress after that. I saw Doug at the grocery store a couple years later and asked him about the joyride but he had no memory of any of it, which is a shame because that was probably the closest he'd ever come to being a real cowboy.

Way back in 4th or 5th grade we were at someone's birthday party, I don't even remember who, but I do know it was held at a place with a ball pit. A few of us were hanging out there and in jumped Brian, who nobody seemed to really know but he was at the party for some reason anyway. Someone said something about a fart, and from the other end of the pit we heard some coughing bordering on dry heaves. We asked Brian if he was fine and he said he was so we just kept talking. Farts came up again in the conversation and again we heard coughing, so at this point I was sort of thinking we had found a trigger left by a carnival hypnotist to make this kid cough with the power of words, but no. One of the other guys pulled him out by the arm and it turned out Brian had simply landed on a dirty diaper down in the pit.

An old pastime after lunch was taking your little empty milk carton outside, blowing air into it, sealing it up, and stomping on it. If you did it just right it would produce a really loud BANG and everyone would turn and look and for about 4 seconds out of the day you'd be king. It was pretty hard to get a loud one, though. Out of our little group we only got maybe one or two big bangs a week. We had to quit in 5th grade because our new vice principal was a Gulf War vet and apparently he didn't think the loud bangs were as funny as we did. 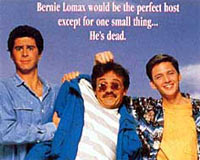 My brush with Hollywood.

In 6th grade we went on a field trip to the Exploratorium in San Francisco. It's some kind of science museum and it was pretty neat, but the real adventure was when we were leaving on the Bay Bridge. I was sitting next to my friend Mike in the very back of the bus, and we looked out and saw that the car behind us was being driven by the spitting image of Bernie, the dead guy from from Weekend at Bernie's. He even had the big sunglasses and hairstyle and weird facial expression. It looked so much like him that to this day I still consider this my closest celebrity encounter ever. One of the chaperone parents who was along began voicing her concern about the undead man chasing us but because she only spoke Spanish almost nobody could understand what she was saying or talk to her. She was either star struck or fearing for our lives because she was pointing out the back and raising her voice at everyone until the driver sped up and got us in front of some other car. I still wonder about that sometimes when I lie in bed at night.

That's all the astonishing tales I can recall right now. I feel like an old man slowly leaning back in his rocking chair getting ready to resume whittling. You know, one thing I've noticed about reminiscing so much is how it makes me think differently. If you were to come up and ask me on any other day if I would go back in time to live my life all over again I'd say, "No you dumbass," and forget about it. But if you asked me right now I'd think about it and say, "No you dumbass," and then I'd remember how I gave my classmate Chris 75 cents to swallow a Matchbox car and how he was absent from school for the next 2 days after that. Those really were the good old days.