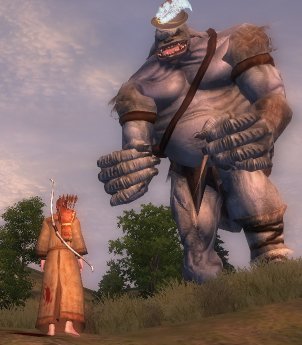 Greetings my fellow nerdlings. Today’s update is related to the latest game in the Elder Scrolls game series, Oblivion. We here at SA are big fans of this game, dedicating a lot of time and energy discussing it on the front page. I’m going to have to assume that most of you have played this game before, unless you have an ancient computer made in 2005 or like to talk to real girls that look nothing like Dark Elves. If you are the latter, then please continue to scroll down to Livestock’s whimsy narrative about a moon rodeo that goes horribly wrong.

I have always been a big fan of the Bethesda Softworks Softworks series, but I think Oblivion has exceeded everyone’s expectation in gameplay and graphics, making it one of the best RPG’s ever made. Thanks to the power of Radiant AI and "asshole physics", you can murder random people in their homes and then spend 20 minutes covering their body with clay plates and tongs. In my house I have a room filled with nothing but watermelons and skulls. Why? Because I can.

Sure I’m getting a little bored of the game after completing all the storylines and guild quests, but there are a group of people with way too much time on their hands that are breathing life into the game by creating modification patches that change the dynamic of the game for the better. Many simply clean up some sloppy programming, like a better leveling system, higher quality visuals, and a keyring for the assload of keys one tends to acquire. I mean really, how can you be an effective thief when you sound like you have a Jiffy Pop going off in your backpack? This community of volunteer geeks is doing a great job finishing the game Bethesda started.

Today I’m going to highlight the most downloaded and best ranked mods out there. I want to give a big high five to all the guys (girls not allowed) out there who are working tirelessly to provide us with free entertainment and improved breast physics for nude mods. 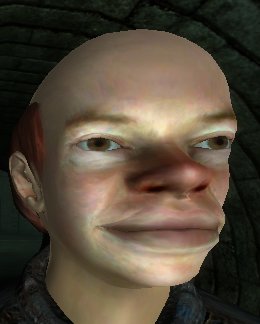 Downs Fix
By Dekov
This much needed mod fixes the genetic disaster that is the land of Cyrodil, converting the extra chromosome populace into normal, healthy looking individuals. Rumor has it that the lead designer of the game had a mentally challenged brother who was killed by a roadside bomb in Iraq, and he added his face matrix to the game in memoriam. While we don’t want to disrespect the memory of the dead retard, it makes for a much better looking land to adventure in.

Bushy Vag Mod
By TehSex0r
This is an add-on to any existing nude patch you already have loaded. It removes any underwear worn by female models and replaces it with a luxurious mane of pubic hair. While mostly a visual change to the game, it does have a benefit of +1 armor to all females. However, an error in the program has been found that makes the pubic hair bright green and causes guards to attack on site. TehSex0r is aware of the problem and is working day and night on a fix.

Glass Equipment Shatters
By omgitzjesusmonkey
Designed with realism powergamers in mind, this mod makes all glass armor and weapons shatter after one use. The broken glass causes 50-100 health damage and may make your character blind if the shards hit your eyes. To make up for this crippling situation, the mod allows you to join the Order of the Blind Moth and make wax in a monastery for the rest of your natural days until the great Oblivion gate opens up covers the land in fiery death.

More Rats and Crabs
By Bigboy69
The unanimous opinion among gamers is that there is a huge lack of rats and crabs in this game. This mod increases the chance of a rat or crab encounter by 300% and creates elite Daedric rats and crabs that appear in the planes of Oblivion once you hit level 20. If your character is carrying any cheese or fish, the rats and crabs will go into a berserker mode that boosts their attacking power. 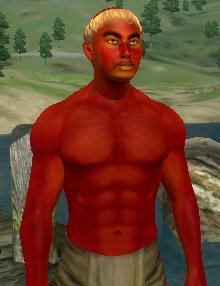 Sunburn
By Frank009
This is one of the many "realism mods" made by Franky009 and causes sunburn to fair-skinned characters after long exposures to the sun while romping through the countryside. Sunburns decrease personality until they peel 2 days later. Repeated sunburns may lead to skin cancer and requires a visit to a Mayo Clinic in Cheydinhal. The high elf doctor working there will send you on a quest to a cave to recover the Chemostone for a cure. Other Franky009 mods include "wisdom teeth" and "visit from Grandma".

The Emperor is George W. Bush
By Rocketsock
This hilarious mod turns the Emperor into a GWB/monkey hybrid, replacing Patrick Stewart’s voice with a dead-on impersonation of our bungling Commander-In-Chimp. A must download for all you Daily Show fans.

White Power
By Storm Warrior
While I’m hardly a racist, I must admit to downloading this mod and having a blast. It transformed Cyrodil into a white supremacist’s dream. All the beggars and thieves are Dark Elves and Redguards, the Dark Brotherhood are Italians, all the shopkeepers are all Asian, and the Mexicans are necromancers and landscapers. I recommend playing a blonde-haired, blue-eyed Nord if you want to advance at all while playing this mod.

Also the Jews are the rats in the game, identified by their tiny armbands and yarmulkes. They are passive so won’t attack you or fight back but really control Cyrodil underneath the cities in a vast rodent conspiracy.

ZAPPED
By Axemaniac (underground gamer/hacker)
This is an original mod by gamer legend Axemaniac. Here is a description of it in his own words: "the mod lets you be Scott Baio in Zapped and shoot women and their clothes fly off and they all have different ragdoll enabled boobs and get into all kinds of crazy situations." This is probably the most ambitious of the nude mods out there and another feather in his cap for Axemaniac. 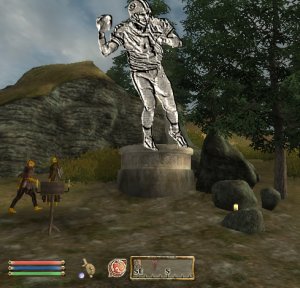 Brett Favre Deadric Shrine
By Gopackers44
When activated, this mod creates a new Deadric shrine with a towering Brett Favre, being worshipped by Nords with cheesehead helmets. When an offer of cheese and beer is made before the visage of the gentle and terrible Favre, a mission is given to go to Bravil and scout out some wide receiver talent. In your way will be an opponent scout who will stop at nothing to keep Favre from having a decent season. If successful, you are awarded the Orcish Helm of Snaps, +10% shield, +50% frost resistance.

Frampton Comes Alive
By Rock4real
This adds the Peter Frampton song "Do You Feel Like We Do" as the soundtrack of the game. Recommended for serious Frampton fans who want to rock out old school while combining various flowers to make potions and riding a horse around the countryside with your elf.

Once again I want to give a huge round of applause to the creators of the game and to all the guys making these mods who are very talented and probably virgins. We appreciate your hard work and your social sacrifice to make this fantasy world a better place. Akatosh bless.