In the late 1800s and early 1900s my family was one of the staples of the mail order catalog industry, selling goods in many of the finer states of this then developing country. My family was, for a brief time, partnered with another family, the Davies family, which owned a fifty percent stake in the business. Over time the Davies clan was proven again and again to be an untrustworthy consortium of scoundrels, thieves, and hucksters. In time they were driven back to their native land, England, where most of them reside to this very day. While these ancient catalogues still bear the moniker of Davies, rest assured that they had no part in the actual work and merely played the role of barnacle to my family's great crablike carapace.

Sadly, this business was discontinued in 1921, when my great great grandfather Cyrus Boruff had a psychic vision predicting the development of what he described as "a massive network of pneumatic tubes shuffling goods from one domicile to the next." For reasons unknown, he decided this network would destroy the catalog industry, for "no one would bother embrace a confederation of bound pages advertising goods when they could simply scream into a tube that which they desired." Due to this strange enumeration of the future, as well as numerous ailments of the mind, it was more than ideal for the Boruff Catalogue Co. to disband. Later my family became famous for making Royal Mariner Brand Mayonnaise, which was renowned for its usage of octopus blood as a key ingredient. Recently, I happened upon some of my family's old catalogs, and I am pleased to share segments of one with you now. 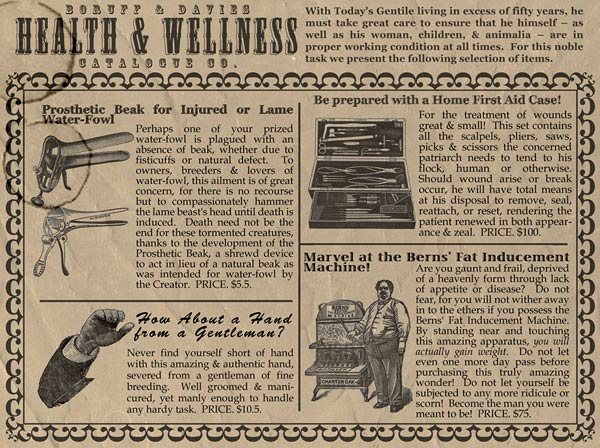 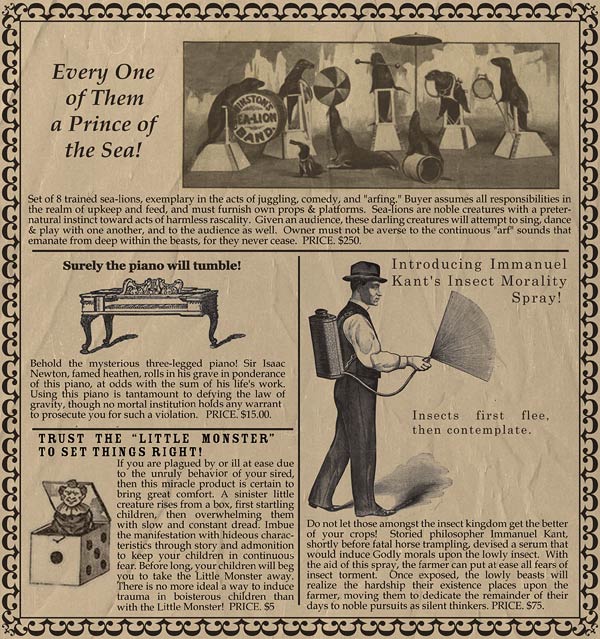