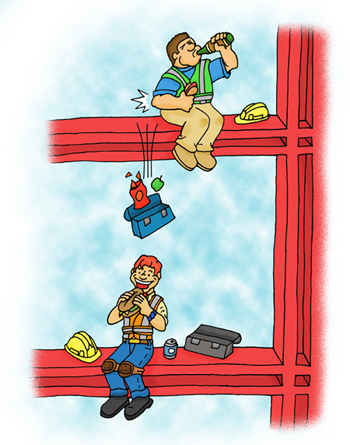 A construction worker sits down to take a lunch break on a high-rise beam. He drops his lunchbox, which:

A man opens his lunchbox to find that it no longer contains the banana sandwich and blood-pressure medication he packed that morning. Instead, it's empty except for a button device and an ornate invitation, embossed on black-splotched stationary, that reads "Press this button, and an animal you don't know will die, but you'll receive a reward." He presses the button, and immediately a double cheeseburger appears in his hands. He devours it gratefully, chunks of meat disappearing noisily down his throat. Nothing else of interest happens during his day.

The man, now in his late 40s, writhes in a hospital bed, nearing his somewhat premature death. "Oh, if only I'd made healthier eating choices," the slovenly man groans. The camera pans to the corner of the room, where a cow laughs.

A woman becomes obsessed with the belief that there are too many boxes in the world. She voices her concerns to her boss at work, who responds by slightly reducing the amount of inventory the company carries in its warehouse. Unsatisfied with this gesture, she submits the complaint "too many boxes" to the police department. She underlines the phrase several times, and she cuts the paper with scissors so that it becomes triangular and not boxlike at all. Her note eventually ends up in the inbox of the Box Control division. The crusty Box detective agrees to take the case.

The box detective begins investigating, once he removes a stack of boxes that had been placed in front of his door. He sees boxes everywhere, just hundreds of them, floating soggily in the river of blood that has suddenly started flowing down the street like pungent lukewarm lava. He's shocked when he opens a few random boxes and discovers that there are dead bodies inside them, and more surprised still to discover his own dead body stuffed into one of them. He looks up to the heavens to decry his fate, only to notice, for the first time, the perforated edges of the horizon, which starts folding into itself, producing darkness and a loud, annoying cardboard-on-cardboard sound.

Another box thuds atop this just-closed box, followed by another and still another in quick succession. The camera pans back to reveal a woman watching the stacking process with panicked eyes. "Too many boxes," she shrieks.

The box detective awakens with a start and a scream, in a bed shaped like a box, but this is just a coincidence. He is not actually a box detective. He is an advertising salesman who was having a dream about the kind of adventure that eludes him in his everyday life. He tells his therapist about the dream. Suddenly, he's pummeled by a boxer, who's angry because the advertising salesman's session is running long, cutting into his allotted time with the therapist. 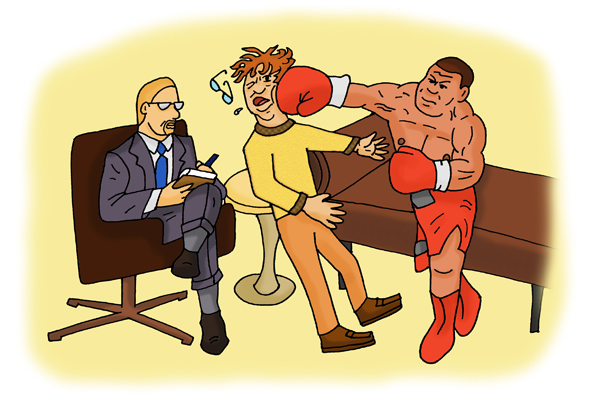 The salesman enters unconsciousness, where he can be a box detective again. He smiles stupidly. The boxer takes a seat across from the unflappable therapist, with the concussed man between them. His breathing becomes calm as he gathers his thoughts. "I feel boxed in," he says, with no sense of irony, because that part of his brain is dead.

Thanks to Michael Balistreri from Black Snow Comics for the illustrations!