What Astronauts Miss Most

The NASA Young Astronauts Outreach Program provides Kindergarteners through sixth graders the opportunity to submit questions to astronauts aboard the International Space Station. Lt. Col. AJ Tucker, Mission Commander of the ISS, answered the oft-asked question, "What do you miss most about the earth?" His rambling, nearly incoherent, and extremely dark response to the question was never transmitted to the students of Palo Alto Elementary in Fudd, Wyoming. However, by mistake this response was sent to house DJ Paulo Attitude of Baja, Tennessee. DJ Attitude stopped participating in the Young Astronauts program in 1996 when Astronaut Paisley Walker replied to the question, "Do you feel it party people?" by sending a severed finger in a bag.

You wanted to know what do astronauts miss most?

That's a really great question! Astronauts are all different, each with their own unique qualifications and quirks about them. I can only speak for myself, but I'm sure Dr. Boron Sliderule over here running the mathlab doing zero gravity subtraction misses something really amazing like Afrin. Our visiting cosmonauts probably miss stabbing homeless people and beating up Asians for Y3teb.ru. That's the Russian version of that Youtube thing only Russia's is all about car accidents and women passed out on park benches.

Did you know that in Moscow they actually drink gasoline? It's true. It's like water to them.

I've learned a lot about Russians. They basically live in a country after an apocalypse. Like after Obama is done with America we’re going to be like what Russia has been like for 20 years.

They don't care about anything, even themselves, and they try to solve every problem by getting drunk and fighting. Last week I caught one of our two cosmonauts trying to stab earth. He was drunk and just tap-tapping away on the glass with that knife he made from a nitrogen canister. I let him keep at it. I doubt he'd ever be able to reach, that glass is like six inches thick, and it kept him distracted from biting us which is how he generally deals with boredom. 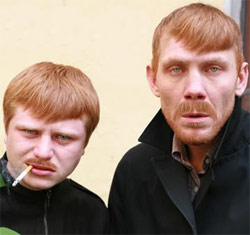 This is a picture one of our cosmonauts had with him. I'm not sure if it's either of them, both of them, or what. I've got to admit, all Russians look about the same to me.I don’t know about those two. Yesterday the fat one, well, the fattest one, asked me, “When do I get to go home?” I have no idea. Why is he even here? Nobody even knows where these guys came from. The Russians back on earth think they might have stolen a rocket from the Cosmodrome, but they’re still looking into it. They said they might be official, but they need to confirm. I thought they were our resupply mission but then the food they brought us was a dead pig in a garbage bag.

Sorry, got a little sidetracked here, I’m sure the last things you kids want to hear about is how I had to kick a naked, sobbing Russian to sleep last night. Just kick his god blessed chest and sides until he shut up. Didn’t know what else to do. Unlike the cosmonauts we’re getting paid to do some science BS for the poindexters, not download a video called “Best Butts in Bagrationovsk.” Ate up 90% of our downstream bandwidth and, trust me kids, it wasn’t even worth it. The very best butt in Bagrationovsk is about on the same level as “best butt in your pants, right now, that you are sitting on.”

No offense to those of you with amazing butts. What am I saying? You’re kids, you shouldn’t even be worried about your butts. Focus on your abs.