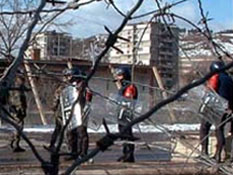 A well protected home has all this and more.

While some crazy foreign people like to make crazy foreign people insults against America by poking fun of our goofy President or refusal to riot during soccer games, it's a commonly known fact that America leads the planet, if not universe, in home protection. Sure there may be 500,000 different ways for you to be murdered in your house during an armed burglary, but we have at least 1,000,000 various methods to prevent this from happening. Popular movies such as "Home Alone" and its sequel "Dunston Checks In" have demonstrated that American ingenuity (combined with common household items) can successfully deter any assult from a couple wacky burglars who have the total intelligence of rock salt. Some of the more popular theft-deterrent systems that American households currently employ include the following:

Guard dogs which try to eat anything that poses a threat to them, such as minorities, babies, lesbians, sandwiches, or their owner

Bars which cover up windows, impenetrable to anybody without a screwdriver or opposable thumbs

Sticker on front door which reads "NO JEHOVA WITNESSES OR BURGLARS ALLOWED. OCCUPANT OF HOME IS ARMED AND PROBABLY NOT PASSED OUT."

Television loudly tuned to "Who Wants to Be a Millionaire?"

Replacing all doors with solid steel walls disguised as doors

The refusal to purchase anything worth stealing

A button that, when pressed, makes the house rotate around 180 degrees. Also the house is moved into another state, one which has a lower burglary rate

Elderly woman who sits on a couch by the front door all day, moaning and decomposing while items surrounding her spontaneously oxidize and mysteriously take up the stench of mothballs

As Americans, we're free to pretty much construct whatever harebrained schemes we want to defend ourselves as long as it's inside our personal property and doesn't cause neighboring houses to become radioactive. In this day and age, with the invention of miraculous personal protection items like "really strong wood" and those big bullets that make your internal organs fall out, there really isn't any good reason for people to have their homes burglarized. However, these aforementioned protection schemes have a critical downfall: lawsuits. You'd better hope to hell that the guy breaking into your house ends up with his skull in a different area code because if he falls prey to your anti-burglarly device and survives, then you're going to be wrapped up in lawsuits for the next decade. Basically, while you're free to protect your gun collection and Star Trek memorabilia in virtually any way possible, you're going to get in trouble if somebody breaks into your house and becomes a victim of your protection scheme. Say that somebody busts into your home and storms into your bedroom during the middle of the night. While it's fine for you to have a gun, you are only allowed to legally shoot the intruder if all the following conditions are met:

1) The intruder has a deadly weapon such as a gun, drunk driving automobile, or shark. A gun is only classified as "deadly" if it contains hollow-point or Black Talon rounds since normal bullets don't hardly cause any damage these days thanks to society's constant exposure to gene-mutating microwaves and CRT radiation. The normal .45 caliber round is incapable of breaking human skin.
2) The intruder has signed a written contract admitting that he plans on killing you. This contract must also be approved by the state governor and cosigned by somebody in Congress.
3) The intruder has killed at least 10 people in his past, with at least two of those victims dying in the last month (not of natural causes).
4) The intruder has previously expressed to you his intent to make you murdered. He can only do so voluntarily and can not be "tricked" like in the following situation:

YOU: (Cleverly) "I sure don't hope that I don't feel that you don't not murder me! Are you?" (Chuckling with superiority while loading gun)
BURGLAR: "What?" (Murders you) 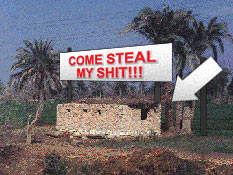 So the officials of Northampton, undoubtedly cranky because American keyboards don't have a "£" button and nobody knows the secret code to display it (besides copying and pasting), has removed another slice from the Cherry Pie of Freedom. Instead of allowing the liberty to cause personal injury to local fence-climbing addicts, the government has decided to clamp down and forbid the protection of private property. If you thought that was bad, I have terrible news that will shock and horrify you: things actually get worse. Also, you smell like shit and nobody likes you. The wonderful people at the State Og Fact-Finding division, which recently took a break from researching what John F. Kennedy was doing on the moon when he was assassinated, was able to turn up the following document taken from a recent Northampton city council meeting. The results may chill you... in a chilling way!

1) Outlaw barbed wire. Pass law banning citizen use of barbed wire and making it illegal to show graphic depiction of barbed wire in video games. Require all digital representations of barbed wire to be replaced with image of curly french fry or non-Nazi robot with green blood.
2) Abolish the manufacturing and use of front doors. Burglars or intruders may injure their arm while trying to break them down. Require automated "people mover" conveyor belts to be installed outside every home, allowing easy and injure-free access to all burglars (particularly handicapped).
3) Ban any wall taller than three feet. Robbers run the risk of falling off and hurting themselves. If intruder has contracted "Advanced Gravity Syndrome" and suffers more damage when falling, owner of house will be legally required to come to the intruder's aid and personally heal him until 100% recovered. This includes buying Christmas gifts that say "get better soon!" and feature a picture of a kitten.

A chilling look at things to come? Most certainly! However, we American citizens can rest easy tonight, confident that our budding and prosperous legal industry will prevent any events like these, which might put a damper on their cash flow, from occurring. It's your right as a United States resident to deter break-ins from your God-fearing home in almost any way possible... assuming that nobody actually ever breaks into your place. Now grab that barbed wire and get cracking, you patriot.

Another week, another issue of everybody's favorite crudely-drawn firemen heroes!

In case you forgot, you can visit the official Fireman Comic website by clicking on this series of letters and words.