While no official flag code exists for the Confederate Flag, Confederate Battle Flag, or variations, it is customary for these flags to be displayed from sunrise to sunset and also overnight on buildings and stationary flagstaffs, truck back windows, belly-stretched sleeveless t-shirts, covering the inside of bunkers, rallies for the second amendment and in front of certain state government buildings. The display of the Confederate flag is protected by law in the state of South Carolina. Also, the Confederate flag should not be displayed when the weather is inclement, except when you are too drunk to take it down or fuck those people down the street, even when it's raining they need to see it on your truck out their window.

Below the U.S. flag if it's the 4th of July, above or in place of the flag of the northern aggressors on all other days.

Kelly and Debbie can hold the big flag you won at the fish fry raffle while they stand in the bed of your truck. They can go "Woooooooo!" and are permitted to drink beer in one hand while they hold the flag.

When displayed with a speaker's platform, it must be above and behind whoever is talking about states' rights, immigration, welfare or rock-rapping at the fair grounds. If it makes up the entirety of the background you are allowed to carry a rifle slung over your shoulder.

All persons wearing military uniforms they bought off the Internet should talk drunkenly about how the Civil War wasn't even about slavery. Look it up. Abraham Lincoln wasn't against slavery either until it became convenient. Non-preppers and non-military-enthusiasts may honor the flag by loudly discussing who the real racists are. To get you started: It's not white people.

If you can get Debbie to put the dogs out back for one goddamn minute, and watch them this time, then you can climb up on the ladder and lower the Confederate flag to half staff on special days of remembrance. This includes lowering it ironically to half staff when a bunch of colored people die.


If your Confederate flag gets a smell in it that you can't Febreze out or it starts looking too gnarly to honor all of them fallen heroes of the Confederacy it may be time to replace it. Before you staple up your new Confederate flag to the fake wood paneling of your basement you will need to properly dispose of the old flag. It is important you give the Confederate flag the respect it deserves during the disposal.

1. Rake all the animal waste you can find in your yard into a pile and place the old Confederate flag over it. Stomp and grind dog, cat, and pig shit into the Confederate flag.

2. Wad the Confederate flag up into a shit smeared ball and place it in a trash bag.

3. Drive the trash bag to any statue honoring a general or political leader of the Confederacy.

4. Remove the shitty flag from the garbage bag and cover the head of the monument with the flag.

5. Douse both in gasoline or kerosene.

7. If any pieces of the Confederate flag break loose while the flag is burning it is important you track them down and extinguish them with piss to prevent the fire from spreading to anything useful.

8. Once the Confederate flag is completely consumed, speak appropriate words of thanks to President Abraham Lincoln, General William Tecumseh Sherman, and General Ulysses S. Grant for saving the nation and the world from the cowardly traitors of the Confederate States of America and leaving your ancestors alive rather than putting them to the sword like they deserved. 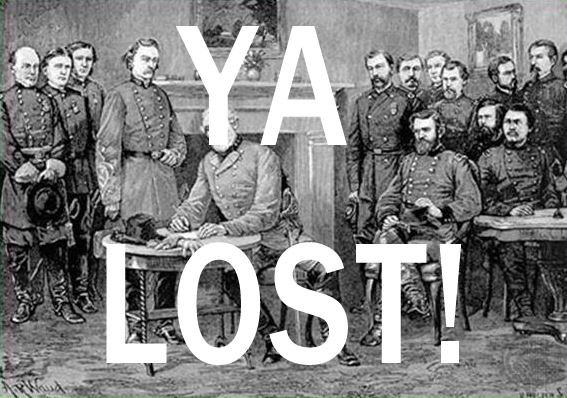