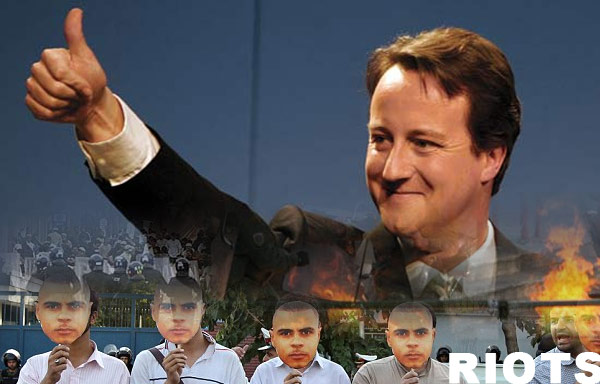 British Prime Minister David Cameron addressed his nation in the wake of severe rioting. He promised to deploy more police to stop the rioting and pointed to moral decay in Britain as the chief cause of the riots. "Irresponsibility. Selfishness. Behaving as if your choices have no consequences. Children without fathers. Schools without discipline. Reward without effort. Crime without punishment. Rights without responsibilities. Communities without control. Some of the worst aspects of human nature tolerated, indulged - sometimes even incentivised - by a state and its agencies that in parts have become literally de-moralised." Promising to end the unrest, Cameron went on to describe the downfall of other civilizations that could serve as a warning for Britain.

Over time certain factions came to view the whip as a cruelty inflicted upon the slaves who toiled to build the great pyramids. It was these forces, of regulation, of rights without responsibility, that forced the pharaohs to lessen the hand that wielded the whip until the whip was no longer feared, barely a tickle, and the slaves smeared their eyes with mesdemet like fucking queen whores and ran amok with their tits half out and no respect for Osiris let alone their parents anymore. Straight down the bog.

Violent video games and horror films caused their children to run wild in the streets and paint up the council flats with cocks. Huge pink willies wiggling at you and robbing you of morality. One look at that and an entire generation went to shite.

This once great culture really shit itself once it stopped cutting out hearts. Things are working fine with the heart cutting, why stop? Single parent households, that's why. No dads. Fuck's sake, didn't stand a chance against the Spanish without dads about.

Nobody worked anymore. The liberal policies of giving the Indians food and land caused them to stop going to school and applying themselves. Why bother, right lads? Just head on down to the pub and sock in a few pints courtesy of Uncle Sam. Whoops, we've fucked it all up. We're all broke tosspots with bloody diabetes whinging about water rights. Water responsibility, more like. Oh well, at least we have our big wig things, whatever those are about.

Negotiated away half of Poland to the reds. Didn't burn enough of the art or the right books. Let the kids run the fucking schools. Just run wild in the schools. No discipline anymore, grades don't matter, why do you need a job? Old Goebbels'll just give you a Volkswagen and a council flat he stomped out of the Jewsies. Why work at all? Bollocks. Done in by laziness, essentially.

More darkies than whites in the colonies. Back home it was the usual mixture of too much bureaucracy holding back the private enterprise and too many independent newspapers and television stations.

Welfare spending. Social security. Toys for tots. Santa Claus. The Santa Clause. Selfish sex in the home. Mexicans. A darkie in the White House. Unwhispered dogs. Too many roads. Operation 2 Fast 2 Furious or whatever Rupie was on about the last time we had pasties in my hot tub. Basically, marijuana and regulation on oil wells.