Can I Get Some Rational Thought, Yo?

Can I Get Some Rational Thought, Yo? 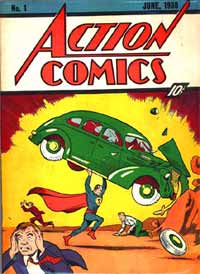 When times get tough, you may have to turn the Golden Age into the Brown Age.Like a ripe pair of underwear, war is a fruit that's looming to be picked. Each day brings us closer and closer to the next phase in the war on terror, which if I'm not mistaken, now involves attacking wacky Iraqi dictator Saddam Hussein and his country. I honestly can't point to Iraq on a map, mostly because I don't own a map, but also because I believe maps are a form of evil invented by non-Christians who probably worship robots that are in turn programmed to worship Satan. I also sure can't think of a good reason to deliver our precious supply of exploding bombs to a country that as far as I know exists only on the TV. Thankfully I don't have to come up with the answers to these multifaceted questions about the war on peace. I did brainstorm some answers in my notebook anyway, but those answers actually turned out to be a recipe for vanilla Pepsi accompanied by doodles of various dead presidents getting it on. The United States of America happens to have a government, which apparently may or may not give either a lot of rich people or a single rich person the right to answer the war question. The president (note: not one of the dead presidents I drew pictures of getting it on) wants to wallop Hussein. The other people who think they might be able to make this decision are mixed. Some cheer the president on, high-fiving him into making with the war already. The others are defiant, offering only boos and hisses that reveal the shocking truth: ghost snakes have infiltrated our government.

Saddam Hussein, like most really big assholes, deserves to be defrocked and punched in the face with a fist. But then whose fist should we use? Since Superman isn't real and Jesus is in outer space, it's up to us Americans to combine all of our fists into one giant fist, which we will then fill with bombs and swing at Iraq. I don't mean that literally, because modern medical science hasn't come up with the giant fist needed to make this plan work. It's a shame, really. A giant fist that just happens to be a composite of every American fist – whether that fist be black, white, Asian, Arab, Hispanic, or Yeti – would be the ultimate symbol of excess, waste, and power. I can't think of anything more patriotic than that.

More than likely, we will get the war we so richly deserve. This will mean a lot for our country, as suddenly many of our fighting forces will be overseas in the grip of danger. Not only will the lives of these brave men and lesbian women change dramatically, but so too will the lives of us at home. No longer will we be able to laugh gaily at the sight of a man being hit in the groin by a football, for the mere sight of this will remind us that our sons and butch daughters are catching not footballs in their groins, but rather bullets. This also means that a good chunk of our labor force will be busy producing war supplies instead of the basic supplies we purchase to pad and comfort our lives so that we may live like European kings. With provisions limited, we will have no choice but to ration for the better of all mankind. In particular, the part of mankind that includes us and only us.

Rationing? What's that? Can you eat it? To put it bluntly, rationing is what keeps you from wiping your ass once instead of fifty times. It also means that instead of eating giant buckets of chocolate covered chicken, you eat lots of potatoes and never throw anything away, including the sack your potatoes came in. That sack will one day become your finest suit, and what kind of lousy intercourser throws away a good suit? I realize that most of you, like me, have never lived in a time when rationing was necessary. Thanks to my imagination, which has helped me obtain this excellent position as a guy who can write swearwords on the internet, I can tell you accurately and empirically just what a ration-frenzied nation will be like. Magic bulleted list, do your thing! ZOOM!

Toilet Paper
When nations take to tussling with one another, the first thing to suffer is the toilet paper supply. Due to obscure laws written during a rare and possibly unholy full moon session of congress, The Federal Toilet Paper Reserve is forbidden to issue new sheets of toilet paper during wartime. Because of this, we will have to ration the last sheets of toilet paper in circulation. When those run out, we will have to turn to the next best thing: extremely valuable vintage comic books. Early issues of comics such as "Superman," "Action Comics," "Detective Comics," and "Batman" will fulfill the sanitary void left by toilet paper. 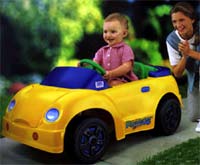 Power Wheels: Clean, economical, and safe for all ages.

Vehicles
Cars burn up fuel like really tiny stars and we sure as shit don't drive those around. Not surprisingly, people will ditch their SUVs and APCs in favor of fuel-efficient cars. Drivers everywhere will purchase affordable Fisher-Price Power Wheels, which as everybody knows, started the electric car revolution in the first place. POW POW POWER WHEELS! POW POWER WHEELS! POWER WHEELS!

Music
We depend on oil for our CDs, but with oil supplies limited we won't be getting much in the way of new music from today's popular artists. Thank the stars, because you can easily substitute today's modern music with music from the previous decade. Like Creed? Then you'll like Pearl Jam, since it's the same damn shit. But what about a complicated band like Linkin Park that utilizes both rap and rock for their tunes? The solution is a little bit more complex, but still easy to accomplish. Buy albums by Nine Inch Nails and DJ Jazzy Jeff and the Fresh Prince and play them at the same time. Bang! There's your modern music.

Laundry and Dishes
Washing dishes and doing laundry are two processes that waste a lot of water, power, and time. It's only logical to combine these dreadful tasks into something fun, pleasant, and economical. Load your dirty plates and dirty clothes together to save resources and show Saddam you mean business. Sure, your clothes might end up with far more grease and meatball stains, but given the social shift towards rationing, your stained clothes will make you more attractive. Studies show that attractive people, like well built ships, are extremely seaworthy.

The Dead
Not even the dead can escape the need for rationing. Corpses are full of not just meat, bones, and muscle, but also a lot of heart. I think that's why so many people love them, but not too much because that would be wrong and not at all sportsmanlike. Obviously it would be foolish for us to neglect such a valuable source of meat. What's more, consuming the flesh of another man gives you all his strength. We Americans are at our best when we are strong, beefy, and full of ourselves. We can't pass up on such a valuable opportunity.

As you can see, we are certainly in for some tough times and big sacrifices. But like all tough times that require a lot of big sacrifices, we will whine and complain our way through them with class and dignity to spare. Really, what's a war without a little bit of suffering? Not a very good war if you ask me!

The Rompit is once again bustling with more activity than your average pit, and that includes both the pit from Mortal Kombat and the various pits of Pit Figher. Cranky Steve regular Psychosis has bathed himself in the thick fantasy and excitement of "Hook", starring Peter Pan.

Because I am a big stupid dumb idiot, I optimistically began playing, only to be shocked and horrified by the shocking and horrifying lump of shock and horror that is the gameplay. Imagine playing a platformer where the world's most annoying midi song screeches at you in the background, and you spend most of your time deciding whether or not it's worth it to drown out the obnoxious sound effects. While this is happening, you're hopping around dodging the same five enemies over and over again and trying to stab them with your wimpy little sword, which actually looks more like a sewing needle or a staple than a sword. You won't be able to get out of the level, because it won't let you leave until you accomplish some inane task, such as collecting cherries or throwing basketballs into hoops. You die if you touch any water, even if it's only half as deep as you are tall. After five minutes of playing, the pounding of your headache will be indistinguishable from the pounding of your fist against the monitor.

That's just a sample. Like all samples, there is more if you're willing to work for it.