The Game Show Network: A Study in Pain 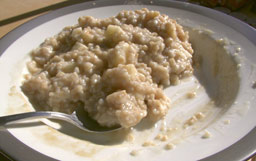 Victory came at last in the form of this lumpy disaster.

My enjoyable weekend began at roughly eight PM on Thursday night (hey, we start the weekend early 'round these parts so we can get more partyin' in) when I began to vomit copious amounts of what looked to be some sort of cheap cat food from the depths of my gut into the depths of the toilet. The torrent of tangy regurgitant flowed forth with stunning regularity until approximately five PM Friday when I was finally able to very slowly ingest some oatmeal that looked like a large puddle of partially-digested maggot larvae.

Thursday night wasn't that bad because I spent most of my time sleeping fitfully or waking up and shouting, "UH OH!" before letting loose with a chunky love stream of ropey barf. I quickly learned my lesson that I should not aspire to such great heights as ingesting anything save water (in very slow, small sips) or doing things like moving from a motionless, supine position on the couch. This included feats such as sitting up, as I found when I boldly attempted to do so in order to watch TV without everyone appearing sideways. Bad news.

Friday was another story. The ease of which Thursday night had passed was nothing compared to the horrors I endured on that fateful day, and the worst part was that my misery was not due to my alien moonman plumbing sickness. I spent the day in bed trying not to throw up and occasionally falling into sleep wherein I had very vivid dreams of having my portrait painted by a legion of coked-up field mice. I was in pretty bad shape, but the worst part was that the entire day I lay in bed, weak and helpless and unable to move, the Game Show Network was on, spewing tales of greed and terror about me like so much raw chicken raining from the sky in a pen full of feral dogs. 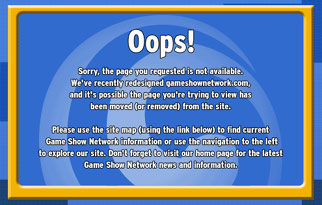 If only the entire channel had been replaced with this message...

As a result of this unfortunate situation, I watched many, many, oh so many game shows in succession. These shows were so traumatizing that I am now unable to watch TV at all for fear that I should accidentally flip past one of them and stare blankly and hypnotically at the screen until it is over.Most of these shows were old but the Game Show Network also had a few shows that they had recently made themselves in an attempt to be "new' and "original" and "tolerable to people." I lay in bed too sick to move watching the moving picture tube flash stories of greed and loss one after the other. It was pathetic and made me feel worse with each passing hour.

This one is a Game Show Network original, and very depressing. The host of this gem is "Kennedy" some second-rate comedienne chick they got off of VH1 or whatnot whose gimmick glasses far outshine her ability to create humor of any sort whatsoever from the vapid wasteland of her failing television domain. I can understand from watching her "in action" that she would want to keep her real name a secret, however, lest word get out that she fails on so many levels as an entertainer and as a person. At least her show is confined to an obscure cable channel so that I don't have to endure seeing her on a regular basis.

The basic premise of the show is that people are paired up with each other and work toward accumulating money by answering trivia questions. At the end of the game they must choose either "friend" or "foe." If both people choose "friend," the money is split. If both choose "foe" no one gets a dime. If one chooses "friend" and the other "foe," the person who chose foe gets all of the cash, sucks to be the nice trusting person, so sorry, you lose. You can guess what usually happens and why this would be very depressing to watch. At the same time, it was helpful because I was able to memorize the faces of the particularly unsavory and appalling characters so as to ensure a sound throat-punching should I ever run into them on the street. 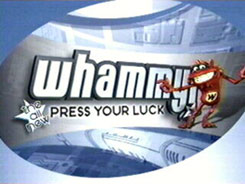 Victory came at last in the form of this lumpy disaster.

Remember the old 80's show "Press Your Luck?" NO WHAMMIES NO WHAMMIES... AND... STOP!! That was an ok show. It was another classic example of greedy people being consumed by their desire for material goods, and it basically summed up the attitude of the 80's perfectly. It was always fun watching people lose everything only to try again and fail because they hadn't learned any lessons at all from their previous mistakes. "Press Your Luck" had to be cancelled, though, when one crazy man memorized the pattern of the damn thing and won over and over again. Way to fuck it up for the rest of us, Chief.

The Game Show Network thought that it would be a good idea to make another version of this show, but they sort of made a few changes. For one thing, the prizes are not nearly as good as those from the 80's version: 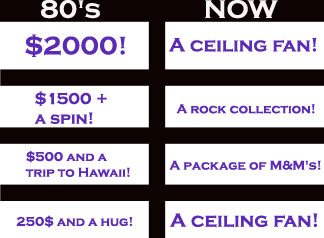 Not only that, but the ratio of whammies to prizes is very unfair. There are about six to eight whammies for every one mediocre prize on the damn thing, and yet the old behavior pattern still runs strong. People's greed causes them to risk what little they gain and they end up losing everything. So "Whammy" is sort of like "Press Your Luck" only oh-so-much more depressing on many, many levels. Plus the whammies are even more poorly animated than in the 80's version because they try to make them all 3D and shit. Hooray.

I know that this show is old news and I probably should have been exposed to its horror at a younger age, but that fact aside, I mean... WHAT THE HELL?? WHAT. THE. HELL?!?!?

First of all there's the host, who in the version I saw was one Richard Dawson. He was dressed in a frumpy early 80's tux with a corsage, a handkerchief, and a gold chain across the cumber bund and wasted no time in kissing every single female on stage with him, even the ones that were missing teeth or that were over 1,000 years of age. He also held their hands while they answered the questions and occasionally would trail off into some unintelligible garbage when he was supposed to be announcing clues or whatnot. Example:

Dawson: "Well you know, I would like to welcome to the show the Olympic Champions from mumble hrumblbmumnblum... And for all of you out there who are competing and who are in sports and who aremmblummb ummblumm umm... and who want to be in the Olympics I say that this is what it is all about. This is the spirit of the... This is why there is annbmmbble mumlblmbumm..." (audience applause) "... And you know what I mean when I say that! HAHA You know what I mean, don't you? HAHAHA!! Because it reminds me of when I was in Lake Tahoe for the comnmmubmmullmumbnum mummblummsumm... and I humbumbulumbulm HAHAHA!!!" (audience applause)

It was obvious that he was drunk off of his ass for the duration of this wretched program and that the people on the show with him either noticed and were decidedly afraid / repulsed, or they were too inbred to care and / or were drunk themselves. I have no idea. In any case, it was nasty-ass grody to the max and I can only say that I am dreadfully sorry that this man is still alive but that I am glad he is no longer allowed on television. I did learn that his replacement committed suicide and the replacement of that guy is none other than hot Hollywood hunk Louis Anderson. Hmm. HMMMM.

Other than the appalling host, the entire show looks like the side show from a county fair in rural Alabama. It's all done in crazy redneck font and the people that appear on the damn thing appear to be brother and sister as well as husband and wife. They always have a crazy old lady with no teeth, however. I think that this is a prerequisite for appearing on this show. I kept waiting for the three-eyed flipper babies to come parading out but unfortunately I was let down and all I got was more white trash.

These are just a few of the shows that I saw and that made me feel even worse. Also on the list but not discussed were "The Match Game," Let's Make a Deal," and "Hollywood Squares." Part of it is probably that things from the 70's and early 80'sdepress me in general, whether because of the color scheme or horrible fashion or some other aspect of aesthetic terror I have no idea, but aside from that these things, the game shows are inherently suicide-inducing.

I physically feel a lot better today but I was horrified to notice that I turned on the Game Show Network "to see what was on" of my own volition. WHAT HAS HAPPENED TO ME!? Being sick for two days was more costly than I ever could have imagined. As I struggled to shovel teaspoon after teaspoon of moist, mealy oats into my mouth without vomiting forth sentient chunks, I little realized that the effects of the Game Show Network would be lasting and scarring. But I suppose that now I must live with my mistakes. I only hope that I don't mutate and turn into one of those people who play the game shows online or whatever. Now that would be really pathetic. Imagine spending that much time online...

Rich "Assworms" Kyanka made this crazy gag with his friend back in the day when he was in crazy high school for Catholics and Retards with Balloons or somesuch. Ahh, life was a lot simpler then. People could randomly call up restaurants and engage the waitstaff in intelligent conversation about any number of things, from beans to... beans. 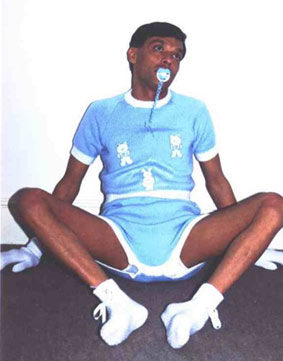 ANYWAY it's called "The Denny's Retard" and it's funny so DOWNLOAD IT OR PERISH, JERK.