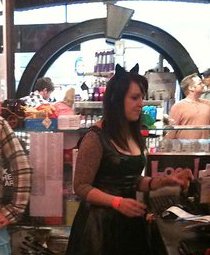 There's this cute cashier at Hot Topic I've wanted to talk to, but whenever I buy something I get the other cashier instead - there's one line and two registers, so the cashier one gets is more or less random. Granted I'm sort of attracted to the other cashier - she's overweight and I sometimes imagine her sitting on me - but I'm much more attracted to the cute one. Last week I was buying a leather collar to go with the trenchcoat, boots, and bondage pants I'd bought while trying to talk to her - all of which I was wearing. I was next in line, waiting for whichever cashier finished with her customer first when, amazingly, they both finished at the exact same time. All three of us looked at each other, like we knew this wasn't supposed to happen. It was up to me to choose which cashier I wanted. I looked at the fat cashier, then the cute one. She looked at me and I knew instantly that she was attracted to me, liked the same bands I did, and would love me for the rest of my life. All I had to do was show that I wanted her love, by choosing her over her coworker.

I hesitated for a moment. I'd never made the first move in romance before, and even this tiny gesture seemed both incredibly bold and incredibly vulnerable. I wanted her to reach out to me, say "can I help you," but I knew she wouldn't, and if I didn't act now she'd let her coworker take my order and deny ever looking at me this way.

I began to step forward, but something was tugging at my waist, holding me back. I realized too late that one of my bondage pants' straps had snagged on a shelf of Marilyn Manson t-shirts, which was falling toward me. I dove out of the way and landed on my back. The fall knocked the wind out of me and I started gasping. The guy behind me - a fat goth in a Bauhaus t-shirt - mistook my gasping for a seizure, so he sat on top of me, holding me down. The cute cashier took the next guy's order and the guy in the Bauhaus t-shirt told the other cashier to call 911 and I noticed his weight on my chest was giving me an erection. 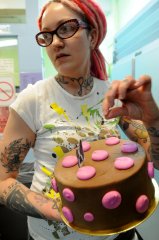 I was depressed about being single, so I bought myself a cake. It was a day old chocolate cake that said "Happy Birthday Ina" - whoever ordered it had never picked it up. The cashier, a brunette in her mid-20s, asked if Ina was my girlfriend. To avoid confessing I was buying a cake for myself, I said yes. Just then, the TV behind the counter showed a news report about a local woman named Ina who died in a car crash yesterday. The cashier gave me a horrified look and I knew I was in trouble. I started blubbering about how Ina was the love of my life and I couldn't believe this had happened. After a few seconds it felt strangely natural. I said that now that Ina was gone I was all alone, with no one to hold me, kiss me, or even just talk to me, no one to give me that basic intimacy one needs to feel human. Real tears welled in my eyes. The cashier felt really bad and gave me the cake for free.

The next day I thought about going to Ina's funeral, but decided that if I saw her husband it might feel awkward. 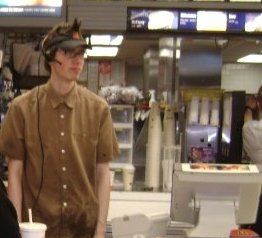 As I stepped up to the counter at Burger Hub I asked the cashier how his day was going. Horrible, he said. I asked him why and he said he didn't want to talk about it. I said okay and looked at the menu. He said I wouldn't understand anyway. I said I might, since I worked a fast-food job too. He asked if I was a cashier and I said no, I was a cook. That was why I wouldn't understand, he said. Cooks just read their slips and did what they were told. Cashiers, on the other hand, wielded all the power. They told the cooks what to make, and the customers what they could or couldn't order. It was a huge amount of power, and gave him a huge amount of stress. He wished he didn't have all that power sometimes, but was also afraid of losing it. What he needed, he said, was just to briefly give it to someone else.

I nodded, pretending to understand, and asked if he'd take my order now. He stared at me for a second, then asked if I'd like to take the order myself. I shook my head, but he insisted, so I reluctantly stepped behind the counter.

The touchscreen had an interface I didn't understand, and as I searched for my food I kept hitting the wrong buttons, flooding the screen with error messages. Each one made the cashier cringe, but he didn't stop me. My hands started shaking and I knocked over a gift card display. The cashier clenched his teeth, but told me to keep going. As I fumbled through the menus trying to upgrade my meal he began breathing heavily.

When I finally finished the cashier was drenched with sweat, but looked oddly relieved. He thanked me and when I tried to pay him he waved my money away. He even offered me a few dollars from his wallet, which I refused.

As I ate in my car, I wondered what had happened between the cashier and me. Whatever it was it had been sort of exciting, maybe even something I'd like to try again, but only once in a while. Being a cashier had a certain thrill, but all that power was too intimidating. As demeaning as it sounded, I'd much rather be a cook.