Blog of the CD Cenobite from Hellraiser 3

There's this female cenobite I have a huge crush on. I first met her a month ago when we were going opposite directions on the Penrose staircase in hell; we passed a few hundred times before I finally worked up the nerve to say "hi." For the last few weeks, I've been giving her mix CDs, which I secrete from large stomas on my body. She says she's enjoying them, but somehow I doubt she's even listening...

I went to the record store yesterday and noticed that vinyl is coming back in style. I have mixed feelings about this. While it's great that people are buying physical albums again, I still think CDs are the superior format. Some people claim the bass on vinyl sounds "warmer," but that sound was not on the original recording and isn't part of the artist's vision. Also, records' bulk and dull edges make them rather cumbersome as throwing weapons.

My mom wants me to move out of her basement by the end of the month. She says I'm 300 years old and should be living on my own, and also that she's sick of the constant rattling from the chains I've got hanging from the ceiling. This means I'll have to get a real job, as I doubt I could support myself as a part-time DJ at an S&M club. I've burned my resume onto CDs and have been throwing them at prospective employers, but so far no luck. 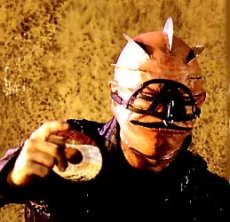 For the next few weeks, I'll be counting down my top 10 albums of the '90s. Number 10 is Soundgarden's Superunknown. The year this album came out, it never left the CD player embedded in my chest. There were nights I let humans escape with their lives rather than throwing this masterpiece at them.

Ebay user todd1409 is a liar, and I urge all my readers to avoid any transactions with him. I sold him some Cowboy Bebop DVDs recently, and he left me a negative review saying they arrived in poor condition. The DVDs were flawless when I appeared at his door and threw them at him; I take no responsibility for any damage incurred after that. If todd1409 wants to pay outrageous shipping and handling charges for his anime DVDs, he can be my guest.

Got fired my first day as a janitor. Apparently, my boss was under the impression that I know how to mop floors and squeegee windows. I'm mainly an immortal demon that throws CDs at people.