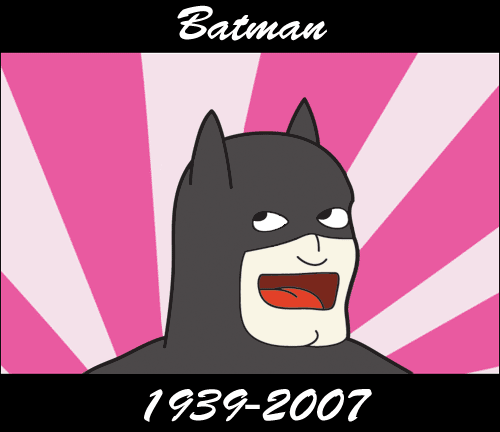 Batman is dead. After mistakenly grabbing a can of Spray-On Bomb Exploder from his utility belt while reaching for the Spray-On Bomb Diffuser, our most superpowerless hero has departed this world for the big batcave in the sky. DC has confirmed that no attempt will be made to resurrect the character. Batman is gone for good.

In memory of the Batman we all grew up with, let us reflect upon some of his comic book appearances and hope that there are bad guys in heaven just waiting to be broodingly gazed down upon from a dark rooftop. 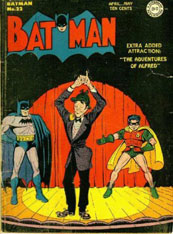 Hoping to become the world's greatest detective, Batman seeks advice from none other than Sherlock Holmes himself. What he gets, however, is an unexpected lesson in the art of the booty dance.

Batman: I really don't see what this has to do with fingerprinting!
Sherlock: My boy, if there is one thing I have learned in the course of my investigations, it is that one cannot keep their hands away from a booty that is being properly shaken. I don't know how you Americans gather fingerprints, but that's how us Brits do it.
Batman: Hmm. Yeah. Yeaaahhh. 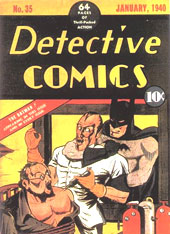 There's a killer loose in Gotham City... tetanus! Armed with the newly-developed vaccine, Batman is out to eliminate this scourge from the city once and for all.

Batman: Inject this man with the tetanus vaccine... NOW!
Doctor: That's what I was doing!
Patient: Will you two please stop? That needle keeps jamming into my shoulder!
Batman: Just... (struggling) inject him already!
Doctor: I'm trying to inject him! Why are you fighting me?
Batman: It's the only way I know how to help people! 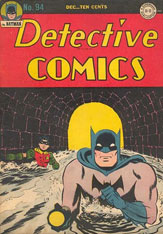 Batman's navigational skills are put to the ultimate test in this thrilling aqueductic adventure!

Robin: We're trying to get to the moon, right? I don't think we should be seeing water.
Batman: You don't understand space. It's complicated.
Robin: I understand sewers. Which is what we're in. We should have taken the Batrocket.
Batman: Nonsense, I think we're almost there. It should be this next left.