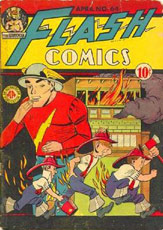 The Flash acts like a chinaman and sets a building on fire. 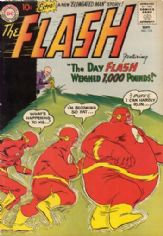 
The Flash's two fat brothers visit him and embarrass him by dressing in his suit and trying to fight crime.

Key Moment
Darryl: I'm so tired, let's stop to eat.
Greg: I know a good Italian restaurant on 4th street.
Darryl: Oh Jesus, all the way over there? We better call a cab.
The Flash: GET OUT OF MY SUITS! GET OUT GET OUT GET OUT! 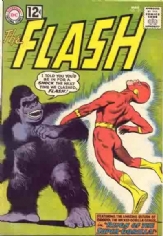 "The Flash And The Electrified Gorilla"
Flash Vol 1 #127

An electrified gorilla is just minding his own business when The Flash tries to arrest him.

Key Moment
The Flash: Alright, Mr Gorilla, you're coming down town!
Gorilla: Don't touch me, I'm electric.
The Flash: Shut up! (grabs the gorilla and shakes violently) YAAAAUGH!
Gorilla: I told you!

Key Moment
Flash's Mother: What are you doing in my bedroom?
The Flash: (turns around with lipstick and blush on) NOTHING!
Flash's Mother: Oh God are you wearing my make-up!
The Flash: NO ONE UNDERSTANDS ME (runs not as fast as usual, flailing his arms like a sissy) 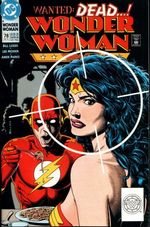 Wonder Woman is getting too clingy to The Flash so he decides to take her out during a romantic dinner.