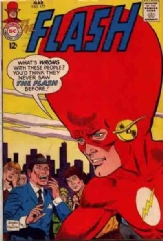 The Flash senses that something's not quite right, but what could it be? Will he solve the mystery before it's too late?

Key Moment
Flash: Now what the heck? This costume is tight in odd places. What's going on?
(thinks about it while pacing around his house at super speeds, hitting his head on every doorway)
Flash: I've got it! The sudden costume tightness, it all makes sense now! Puberty at last! 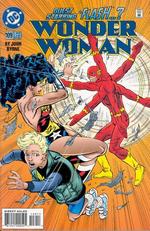 Sometimes a hero's worst enemy is his own boredom.

Key Moment
Wonder Woman: Good job, Brian, you tiny orphan! Now it's the Flash's turn.
Brian: (watching the Flash raise an index finger) One word.
Wonder Woman: Great goddesses of Temyscira! What are you doing? The wind you're producing is unbearable!
Brian: Ah! For some reason my biker shorts and sleeveless jacket aren't protecting me at all! (he and Wonder Woman are blasted through a cement wall)
Flash: Geez. Come on, guys! It was clock. Clock! You didn't even try to guess! 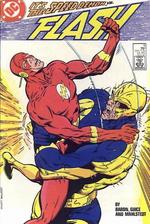 When uncle Larry comes to visit, no one is safe!

Key Moment
Uncle Larry: C'mere, you big galoot! Give your uncle a hug!
Flash: Nooooo!
Uncle Larry: HUG TIME! I live for this shit!
Flash: My back! Let me go!
Uncle Larry: Please stop squirming. This is really all I have left in life. 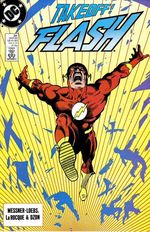 After coming face to face with the reality of world hunger, the world's fastest man deals with it the way that only he can.

Key Moment
Flash: Golly, these kids in Africa are starving to death! What can I do? I know! I'll run fast!
Kids: Yay! Go Flash! You can do it!
Flash: MUST... RUN... FASTER!
Flash: (three seconds later) Ah, Miami. This is much better. 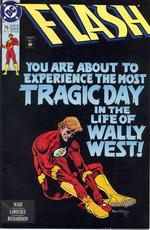 Nothing can prepare you for this, the must gut-wrenching event in the history of the Flash. Will anything be the same again?

Key Moment
Flash: I just can't believe it... (sobbing) Anna Nicole was an inspiration to us all. How could this happen? Why, God?
(running faster than light as the tears roll down his face and fall off, sprinkling the soil of a dozen countries)
Flash: WHYYYYYY?