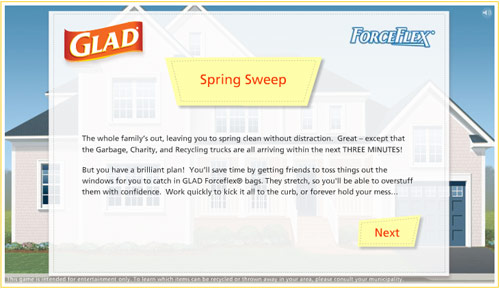 Gameplay: It's time to clean house for Spring! You control a woman as she walks, without any particular urgency, back and forth in front of her house holding a ForceFlex trash bag. She attempts to catch an assortment of objects and trash hurled out of her house's windows by a gaggle of female friends. 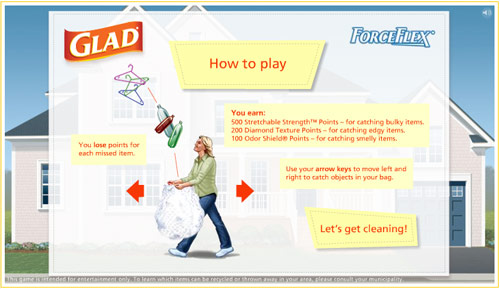 Points are awarded based on the type of item you catch and how that item is handled by various positive attributes of the ForceFlex trash bag.

Goal: Catch and bag everything thrown out of the house and pile the garbage bags up in your driveway to be collected by garbage trucks, recycling trucks, and trucks collecting for charity. You are supposed to catch everything. This is impossible as objects are often thrown out of windows on opposite sides of the house almost simultaneously. 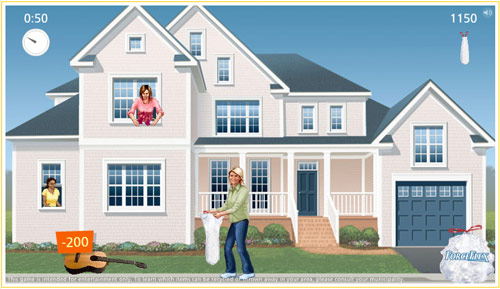 Overt Message: ForceFlex bags are sturdy and can hold large objects like VCRS, Elvis statues and framed paintings without tearing open. Americans own and want to get rid of large numbers of coat hangers and stacks of newspapers. Only women can be Spring cleaners.

Deconstructed: Glad advocates a bizarre ritual of suburban one-upsmanship for the vaguely-responsible bourgeois. Housewives, almost gleefully happy, act as guardians of the household and desire to build a wall and fortify their properties with swollen ForceFlex bags. These walls they construct are more than our 21st-century ramparts, we desire neighbors and passersby to marvel at the sheer volume of what we don't need. Immaculate garbage trucks whisk away our excess to be enjoyed by those "less fortunate."

Glad celebrates a post-gluttony America, a suburbia staggering through the aftermath of Caligulan gorging. We wallow in the byproduct of our consumer culture and Glad implores us, "Be proud, fill your bags." Trash is status. Waste is wealth. 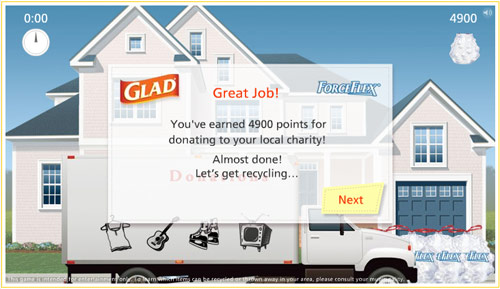 A Better Version: Follow the truck out of suburbia, through increasingly desolate streets, and into a wasteland where the ForceFlex bags are upended into a pit and thousands of scurrying children battle over a faded sweatshirt and a broken VCR. Each battle won and each trash reward grants you pennies for better junkyard equipment and advances you on your way towards becoming Gladlord.

Moral: Never ask your friends to help you clean your house because they're going to throw paint cans and guitars out of second story windows onto your driveway.