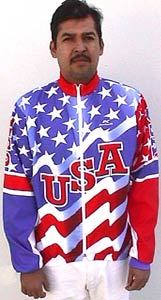 USA! AKA "Thirll Station 1"A little less than a year ago I set out on a journey from the northwest chunk of Indiana to the northwest chunk of Washington. This was all part of an ingenious plan to escape the Midwest forever and relocate to the Pacific Northwest, which was a major step up from the gigantic cornfields that surrounded me in Indiana. I remember at the time thinking, "this long drive across half of our beautiful nation will give me plenty of things to write about!" It was a solid plan indeed. I would have a cross-country adventure and capture wonderful stories to tell about this glorious land called America. Boy was I wrong.

Here's the problem with America: the middle section is a gigantic wasteland. It's not even the good kind of wasteland. Not the awesome kind of wasteland where a few salvaged cans of food gets you a teenage sex slave and all the diseases you can handle, but the bad kind where you work at a McDonald's to support your teenage girlfriend and unwanted child. That's what America's rotten center is really all about these days. At least that's what I gathered from living in the Midwest for twenty-two wonderful years. The residents of the so-called "flyover states" are trying to fight back with their own unique take on culture, but it is a doomed voyage that will eventually kill itself in what I can only imagine will be the trailer park equivalent of a religious crusade. And I don't mean that figuratively.

I certainly learned to hate the land and about 78.3% of its people during my stay. As such I was eager to move anywhere else for any reason, so that's why I left for Washington. I told my unwanted common law wife that I was going to get some more beer to quiet her down, and left her and my seven unwanted children behind forever. I ended up driving from Indiana to Washington twice, and each trip proved to be a horrifying reminder that this country is a lot bigger than it needs to be. But nonetheless that's 4,400 miles I drove, so even after all this time I'm damn well getting an update out of it.

I'd like to share a few random thoughts on the states I traveled through. As I made the trek twice, I took different routes each time, so don't think I was navigating drunk or trying to really get the most out of these sub par United States. If I wanted to see the best of the U.S., I'd avoid the middle entirely and just jump a monster truck from the East Coast to the West Coast with the aid of a giant ramp and several rings of burning sharks for dramatic effect.

Indiana
Indiana was a lot of fun to leave, and I miss absolutely nothing about it. I've complained about Indiana a lot in the past, so I'll just post a hyperlink to that and shut up.

Illinois
My experience with Illinois consists of spending time in Chicago and avoiding the rest of the state with a burning passion for subconscious reasons I simply do not understand. I guess it never occurred to me there might be anything else in Illinois. From the other parts I've seen of it, outside of Chicago, it was indistinguishable from any other Midwest state. Flat farmland ranks up there with "'Golden Girls' autopsy photos" as one of the worst things to look at. Little known fact about Illinois: it's not actually pronounced "ill-in-no-is." That one confuses everybody.

Wisconsin
Wisconsin is a rather ambitious Midwest state, because it attempts to do things like modest hills, strange rock formations, and horrible tourist traps. Madison is a fairly nice place, but the rest of the state has problems deciding whether to be just another boring cornopolis or deranged tourist destination. I give Wisconsin a tremendous amount of credit, because few Midwest states have a "Tommy Bartlett's Robot World and Exploratorium" of their own. Wisconsin is lucky to host such a business, as it is quite the prestigious honor and definitely makes the neighboring states jealous.

Minnesota
I tried not to stop the vehicle in Minnesota because every time I exposed myself to the elements I was in excruciating physical pain. They have some kind of special proprietary coldness there designed to scare outsiders like myself away. I'm not sure what they have to hide, but I imagine they have some kind of subterranean society they don't want anyone to know about. At least I hope so, because there was jack shit above ground. One amazing feature Minnesota has to separate it from the rest of the Midwest: changes in elevation. HOLY CRAP, THERE WERE BIG HILLS THERE! JUST LIKE IN PICTURES!

North Dakota
North Dakota is approximately 95% boring farmland, with a few areas I can only describe as "reverse hills." Maybe some day a geographer or someone will come up with an elegant word to describe a recess in the ground elevation, but probably not in my lifetime. The last 5% of North Dakota features Teddy Roosevelt National Park and some tangible scenery. That was actually the first legitimate scenery I saw on my first trip to Washington, which meant I had traveled roughly a thousand miles through several states without seeing anything even remotely eye pleasing. I really don't understand why those nutcases behind Operation Plowshare couldn't have created some breathtaking scenery around the Midwest with some fancy pants nuclear bombs. It would be a real morale-booster, not to mention a boon for tourism.

Wyoming
The state that almost created the battle-hardened and merciless Dick Cheney proved to be kind of boring to drive through. It was basically "Montana but more red," which was nice because I like red and at this point in my trip I was really wanting to fly through the windshield and splatter all over the highway in a desperate attempt to not spend any more of my life driving. On the plus side I got to see some high quality shale! Hell yeah! 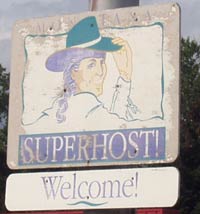 Montana, strange visitor from another world, who fights a never-ending battle for comfort, hospitality, and enjoyment for all who visit.This is an absolute monster of a state. First of all, it never ends. It goes on for days and days. Second of all, what's there is terrifying. This is the only place in the world where any jerk can go claim a mountain of his own. Just take your truck there, find an unclaimed mountain, and the government will provide you with a rundown trailer and help you erect the ruins of a barn. There are even government grants available to help you afford a derelict vehicle to place atop cinder blocks in your gigantic city-sized front yard.

Driving through Montana is a painful process. The eastern half of the state is an endless cattle field, and there's a big hill about ever five miles. Then the western half is full of mountains covered with trailers and rundown barns and derelict vehicles. It's like a tornado swept through a trailer park and deposited the contents safely on top of mountains. The result is lots of wonderful sights scarred with ugly homes.

Life in Montana is difficult because the only clothing stores there are hunting supply stores. As a result the entire population is clad in camouflage, including the people that man the fast food restaurants and gas stations. And I'm quite sure they are all armed, because in Montana, you never know when a bear or the FBI is going to challenge you for your land.

What frightens me most is that Montanans are quite clearly up to something. There's something suspicious going on there, and I can't seem to put my finger on it. It's not quite a state; rather, it's more like a training ground. Maybe God created Montana to train his faithful.

Idaho
Idaho is the best state ever because I just had to drive through the panhandle and it was only 60 miles wide. I wish every state was as quick and painless to travel through as Idaho. Maybe that's why people like New England states. Idaho a total pussy of a state compared to Montana, and I love it for that. If it were any longer, I would probably notice how scary most of it looked. My main concern is that because the panhandle is so thin, there is very little in the way of a buffer zone separating Washington from Montana. This worries me a great deal, as Montana is preparing for something big. I just know it.

So to sum it up, I had to drive roughly 1,000 miles just to get past the cornfields of the Midwest. After that I was treated to "dirt and rocks," followed by "big brown hills and fields," followed by "bigger hills with rundown trailers on them." There were some mountains in the mix, but I was so drunk and tired I just wedged a brick on the gas pedal and slept through them. Really, I should have done that for the entire trip.

If This Dirt Could Talk