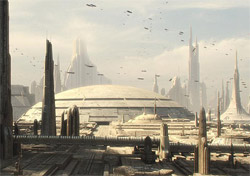 Coruscant, the city that never hypersleeps.Chief Ducto: Muglup, turn on the transcription droid if you would. Oh, it's already running? Okay. (Coughs) Good morning. Some of you may have heard that Republic clone troops have cordoned off the area surrounding the Jedi Council.

Chief Ducto: That's enough. Commander Cameron has issued instructions for all civil forces, police units, and emergency teams to remain at a distance of three kilometers from the Council facility for no less than fifty parsecs or until they issue us an all-clear order.

Officer Meanstreets: Sir, my wife works as a secretary for that guy with the banana head and I haven't heard from her since last night. I'm not going to sit by and just wait for her to turn up!

Officer Steckler: My husband works on the cleaning staff as a droid wrangler and I haven't heard from him either. He's not answering his holophone.

Chief Ducto: Okay, okay, calm down. I'm sure it's just a routine inspection or quarantine or something. Maybe there was an outbreak of mitichlorian mumps and they're just making sure that no one gets out. Everything will be fine.

Officer Meanstreets: Yeah, bloop this wampshite, those Jangos have been stepping all over our toes for months. We're lucky they even let us get out of our flying police cars.

Officer Tubbs: I haven't gotten paid in three weeks, either!

Chief Ducto: Cool your burners! Folks, there is a war on right now if you haven't noticed. Just yesterday the whole city was on fire from space cruisers exploding overhead. If it weren't for the clone troopers the city would be a burned out husk instead of gleaming and rebuilt overnight. We're police, our job is to protect and serve, and-

Officer Steckler: We're trying, Chief, but when the clones won't let us protect our families it gets hard. What are we even supposed to do?

Officer Tubbs: There was a riot going on over in district 4,782, we should probably pitch in.

Chief Ducto: The ah…the ah, clone troopers have cordoned off that area. Something about order 66, whatever that is.

Officer Steckler: What the bloop is order 66? 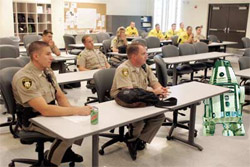 Officer Meanstreets: We can get the R4 unit to plug into the mainframe and find out for us.

Chief Ducto: That's an ah…an unauthorized use of police resources.

Officer Tubbs: Wampshite, bill me for it. Hey garbage can, wheel your beeping ass in here and do something for us.

Officer Tubbs: Yeah, great. Hook yourself up to the mainframe and hack into the main Republic computer and find out what order 66 is.

Officer Steckler: I think it has hacked into their mainframe.

Officer Tubbs: Okay, what is order 66?

Officer Meanstreets: What did it say?

Officer Tubbs: I've got no blooping clue. We should have bought the screen to go with this computer instead of just the slot thing for the R4 unit's data arm doohickey.

Chief Ducto: Look, the budget was really tight. This computer was donated by one of the grade schools.

Officer Steckler: We can get the protocol droid to translate what the R4 unit is saying for us.

Officer Tubbs: Hey silver sissy, get in here and make sense of garbage can for us.

Chief Ducto: -and weird seven-eyed frog monsters, I have us scheduled to repaint the garage today, so we don't have time to mess around with the computer.

Protocol Droid: Oh my, oh dear, what is it you wanted Master Tubbs?

Officer Tubbs: Yeah, ask this honking lump of crud what order 66 is.

Protocol Droid: Of course. What is- 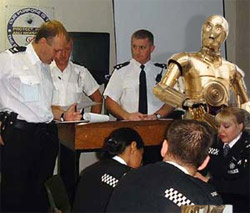 Oh dear, oh my!Protocol Droid: This is absolutely intolerable! You must have transistor mites in you-

Protocol Droid: In all of my years of translation I have never heard a word for-

Officer Tubbs: Cut it out you two heaps of junk or I'll blast you with my Safe-T-Stunner.

Protocol Droid: Of course master. Now listen to me you little scamp, what is order 66?

Protocol Droid: All of the Jedis?

Protocol Droid: Oh my goodness gracious, this is-

Officer Steckler: What did he say?

Protocol Droid: It's so terrible, I can't-

Officer Tubbs: Spit it out!

Officer Tubbs: I'm going to give you to the count of three.

Officer Tubbs: What kind of homodon designs a fainting robot?

Officer Steckler: I think that Jedi dude designed this one.

Officer Tubbs: Blooping Jedi hippies. The only thing worse than those greasy Jangos are those Jedi cult people.

Officer Tubbs: Shut your beep hole, Sit N' Spin. What are we going to do now?

Officer Steckler: I think there are some smelling salts in the bacta kit.

Officer Tubbs: He doesn't even have a nose. I think we should sneak into the-

Chief Ducto: Alright, listen up. No more of this nonsense. I want all of you to get to work on painting-

Officer Meanstreets: Giant spider prostitute is cocooning her johns to the ceiling and laying eggs in their abdomens.

(Sounds of commotion and retreating footsteps)

Chief Ducto: (Sighing sound) Okay Muglup, turn the transcription droid off and get the paint buckets.

Hey muffinheads, I've finally hefted my corpulent bulk up off the floor long enough to write a brand new Daily Dirt. This is a very special extra-long one that I thought was pretty amusing so go read it, or not, whatever you elitist assholes!