Shirley's Big Day at the Circus 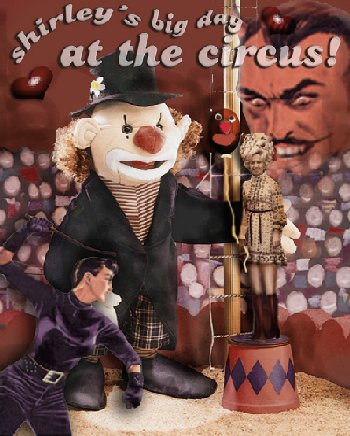 It was a day like any other for Mrs. Shirley Johnson of Fort Worth, Texas. There were dishes to be washed, floors to be mopped, asbestos to be dusted, and beds to be made. Shirley was a prized housewife and worked hard to make sure that her husband Norman had a clean house to come home to after a long day working at the rocket plant. President Kennedy was making a speech on the television about Cuba and nuclear war while Shirley busied herself cleaning the furniture and filling the cigarette trays. Norman would be home in only five hours and she still had dinner to start!

After slaughtering a chicken, she plucked it, dressed it, and popped it in the oven. Then she started on the three-layer cake. Norman loved three-layer cake with homemade frosting, and he would get very cross at Shirley if he didn't have any with a scotch chaser after his dinner. Once all the food was in the oven, she went upstairs to clean the bedroom.

Norman had left his sock drawer open again and had a ham sandwich stored inside for a snack. She sighed and started to clean out the ants and spoiled meat when her keen eye caught something underneath a pair of wool socks. Shirley could barely believe it when she pulled out a copy of that scandalous magazine, Playboy. How could Norman bring a tool of the devil into their household and corrupt his sock drawer with this filth? In a fluster she ran into the bathroom and tried to flush the dirty magazine down the toilet, but it only caused it to clog and overflow water all over the just washed bathroom floor. Shirley burst into tears and fell onto the bed in anguish.

She wallowed in self-pity for what seemed like hours, but after a while that sadness turned to anger. Shirley Johnson was more worked up than a sunset hen in a sweatbox. She slaved away every day and night for Norman, and this was how he repaid her? Shirley then did something she'd never done in their 15 years of marriage; she decided to take the day off.

Where she would go she knew not, only that she wasn't going to clean and cook today for a man that disrespected her with pictures of tawdry harlots. Since woman weren't allowed to drive cars, she walked through the suburb sidewalks on foot, careful to not get a heel stuck in the pavement cracks. At the street corner she spied a poster that was nailed on a phone pole. It had elephants jumping over a flaming clown and had the words "The Fort Worth Circus! Come one, come all!" This excited Shirley terribly and a sense of adventure tingled in her secret spot, spreading upwards to her nasal passages. What better way to rebel against Norman than to go to the circus? She headed off towards the fairgrounds, walking like a woman on a mission.

The air was thick with the scent of animal leavings and midgets as Shirley approached the large colorful tent. From inside she could hear the shouting of the crowd mixed with horns, bells, and the roar of a lion. She started having second thoughts about this idea, but she had come this far and there was no turning back. With her back arched proudly and her beehive soaring high, she opened the tent flap and walked inside the humid circus tent of wonders. 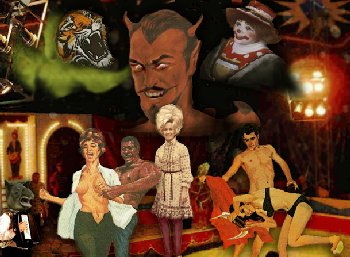 Of Cupid’s delight and devil’s fancy, the Fort Worth, Texas, circus now had Shirley in its grasp. She had wandered into a wonderland of whimsy where her wildest dreams came true. In the corner sat a tapir-human hybrid chewing tobacco and playing an accordion. Bare-chested men chased around scantily clad women and tossed them into barrels of hot oatmeal. Off to the side a festive clown was vomiting into his tiny clown car and driving it into the children in the front row. Trapeze artists flew through the air in death defying flips while tossing fecal matter down on a sickly elephant that bellowed in anguish. The ringmaster was adorned in a red felt suit with top hat, and had a long black mustache that accented his macabre looks. He wielded a barbed whip, cracking it now and then in a lion’s eyes, causing it to maul a nearby midget. The crowd was going wild with rapture. Children screamed in delight, their mouths smeared with grease from the fried pig faces being sold by hermaphrodite clowns in the grandstand. Shirley smiled with joy and sat in the front next to a burn victim.

The show continued on with a bear named King Patrick, who danced on a large rubber ball wearing a colorful cone hat filled with scorpions. Behind him a clown prodded the bear on with an electrified pole and threw handfuls of candy into the crowd. A lollipop landed on Shirley’s lap; red and glistening under the bright lights of the big top. She looked at with longing and wont, for Norman never allowed her to have such sweets because he was afraid they would ruin her figure. She brought it to her lips, locked in an internal struggle. The clown with the prod stared at Shirley, cocking his eyebrow, waiting for her decision. Finally she gave into the temptation and put the lollipop in her mouth. A flood of sweetness overwhelmed her senses, making Shirley dizzy with pleasure. The clown maliciously smiled and prodded the groaning bear onward with jolts of electricity to its testicles.

Shirley was wide-eyed at the fantastic spectacle before her. A large swarthy Negro ripped the blouse off a frightened crying woman in the center of the ring. The children jeered and threw corn nickels at her voluptuous bosom as she was captured by the man and strung up high by sharp wires lashed to her neck and limbs. The Flying Fangalis swung across the trapeze with curved blades, slashing the flailing woman across her mid-section. A shower of blood, entrails, and hard candy that had been force fed to the woman before the show rained down on the children who stuffed flesh and candy alike into their bloated, filthy overall pockets. Then the vivisected corpse was flung down into a pit of amputees who made short work of the remains. The crowd clapped as the lights dimmed, signaling the end of the segment.

Then the ringmaster came to the forefront, placing one shiny black boot on a midget skull and staring into the audience. His dark eyes then locked on Shirley who was contently sucking on her lollipop, that now tasted oddly like baby’s blood. She looked at the lollipop more closely and was surprised to see a baby fetus inside the core. Frightened, she dropped it, causing it to shatter on the ground, and freeing the imprisoned fetus who bowed graciously to Shirley before scattering off under the canvas tent flap. The ringmaster handsomely smiled and extended his hand out to Shirley. She inexplicably took it, unable to resist his inhuman charm. She allowed herself to be led to the center of the ring where the ringmaster gently took her by the beehive and spun her in circles while the crowd mindlessly chanted. As this was going on, a clown dressed in a prisoner uniform was led out by two baby elephants, their tiny trunks holding him by his powder white gloves. He cried and pleaded for mercy, but only received the jeers and laughter of the audience. The elephants led him to a scaffold where a French-style guillotine was erected. The ringmaster then forced the clown’s head through the opening below the razor sharp blade, and placed Shirley’s hand on the lever switch. 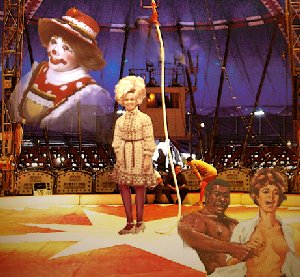 “You have come to us because you are a prisoner Shirley,” the ringmaster spoke in a calm and soothing voice, pleasing to the ears. “You need me to free you, Shirley, but first you must free yourself.” She looked back at the clown that was locked in the guillotine and was shocked that his face was now Norman’s! “Do it Shirley! Do it for yourself and women everywhere!” She looked at the ringmaster, who was now the Devil himself, crimson red with eyes of fire. She nodded, and pulled the lever. The keen blade fell, neatly chopping off the clown’s head that fell into a miniature red wagon being pulled by a small piglet. A ray of sunlight shot out of the severed neck of the clown along with a geyser of rainbow colored blood and confetti. All the children ran from their seats to dance and play in the waterfall, washed over in an orgy of pure light and energy. The ringmaster then waved his hand and the earth opened up, revealing a vent filled with hot magma. One by one, the children jumped into the crevasse in glee, causing sparks of flames when their little bodies plunged into the lava. Then a greater demon from the ninth plane of Hell rose out of the fire, snatching up all the clowns, animals, and helpers, and then descended back into the earth, the fissure closing after him. Shirley was alone, her beehive frizzed and singed. It was getting late and Norman would be wondering where she was. “Let him wonder,” she thought, but she started to walk home regardless, feeling like she had a new lease on life.

Norman was very angry that the house wasn’t cleaned and his three layer cake was burned, but even more so by the fact that Shirley left the house without his permission. She nodded, agreeing with all the verbal berating leveled against her. He was livid, telling her that this was unacceptable and that there were going to be consequences. Then he finished off his scotch and went to bed. Shirley sat there by herself in the dark for awhile, thinking about what happened that day and what she had learned. The truth was that she had only felt really free during the circus, and her whole life before that was just a mundane combination of details. She knew what she had to do.

Norman slept peacefully in his roast beef and scotch induced slumber. He didn’t even wake up as the gasoline was being poured on his chest and belly. Shirley dropped the match on Norman, lighting him ablaze. She took her suitcase and walked out of the house as his screams of agony echoed through the neighborhood. She still had time to find the circus before they moved on. Shirley had evolved.

One of the early concepts for General Grievous was a small child sitting on a floating chair, guarded by two IG88 droids from Star Wars: Episode V - The Empire Strikes Back (1980). George Lucas rejected this look as a child would not be taken seriously as the deadliest hand to hand fighter the galaxy has seen, which is how he wanted Grievous to be portrayed. Instead, part of the final look for General Grievous' face was inspired by the shape of a bathroom detergent spray nozzle.