Wednesday, Jan 09, 2002 by Rich "Lowtax" Kyanka (@TwitterHasBannedAllMyAccountsEver)
Know of an awful site? Send it to us and become a hero!

Yappy's Doghouse, submitted by Chris. Another day, another insane pet website. Who the hell cares about pet webpages anyway? Who in their right mind goes on the Internet so they can read about how much random strangers care about their slobbering, braindead pets? "Yappy's Doghouse" takes this insanity one step further by presenting a webpage which is written in first person form... as if Yappy himself took a crash course in HTML and then decided to start his own horrid e/n site. Come on, we've got enough retarded humans with e/n sites, we don't need pets horning in on the already pathetically overcrowded scene.

My name is Chester, but for some reason I am called Yappy. I am a very happy dog because I get to sleep all day. I never have to work but sometimes I do dig holes in my yard. I hope you like my doghouse. Its brand new. I don't sleep in it though, because it doesn't smell enough. 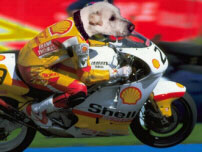 Instead of using the ground, I just back on up....press the fence...and ...ta da.... Hershey Kisses at eye level... And I do it in one simple motion. This method also saves me the hassle of having to squat down.

Boy, that's uh really fantastic there Yappy. Thank God you're just a literate dog and not some pathetic human being who spends his free time pretending he's a dog who rides motorcycles and writes about dinosaurs and shitting on the fence. Then that would be REALLY bad.

PS: Yappy has a guestbook you can sign, but I assume you have to be of the canine persuasion to do so.