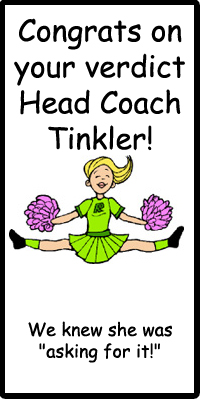 A lot of people would say "What's the harm in country music?" And I would have been stupid enough to agree with them before I saw what happened to my daughter. I thought it was just a phase; occasionally I would get hit with a bean bag on its way to a cornhole or trip over a decorative wooden lawn ornament shaped like a goose wearing a bonnet, but I've stumbled on my share of Barbies over the years and can admit that the rage eventually goes away as long as you get plenty of sleep and avoid the child for a few days.

But there were some things at Casa Webb that were impossible to avoid. At dinner with Bhritnee, I would occassionally bring up college, only to find that her plans had drastically changed when she asked me, "Daddy, can I get a job at the Dairy Queen and work there for my whole life?" I would visit her room, only to find her posters of Paris torn down and replaced with pictures of our hometown and Thomas Kinkade paintings.

Bhritnee abandoned her dreams of moving to the big city so she could live down the street and be close to me and her high school friends for the rest of her life. On national holidays, her shirts would never be without American flags drawn on them in puffy paint. All conversations with my little girl would eventually move to the topic of the past and how it was better in vague ways.

Country music had made my child boring, and tragically, promised to make her a permanent fixture in my life. Time will tell if it's too late for me to save myself from the fate of an incredibly dull child--but it may not be too late for you. If you're worried about the effect of country music on your child or adopted child, ask yourself the following questions:

Take me seriously friends; if you think one boring child is an acceptable loss, think of our teachers, who, due to budget cuts, now have to teach upwards of 90 of them at once. Desperately trying to stay awake while holding a conversation with my daughter is one thing, but I couldn't imagine standing in front of a room full of people who only want to talk about lawns.

NEXT MONTH: Snap Bracelets: They're Back