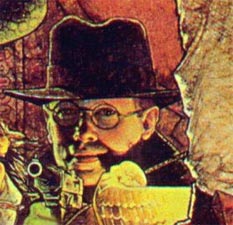 Since no photographs of Nazis exist, this illustration from the box art of "Raiders of the Lost Ark" was all I had to go on.Lowtax will be the first to tell you that I have an unhealthy obsession with the Second World War. He taunts me about it constantly, but it doesn't really bother me because he has his own obsessions like perverted Japanese "bathroom photo magazines". He used to scan them in and send them to me on ICQ. File after file, all of them just pictures of Japanese bathrooms with captions like "CUM GREAT!" and "CLEAN TO PLEASE YOU (IN GROIN)!!?" After putting up with that for a few days I stopped worrying about being ashamed of my fixation with World War II.

While poking around on the web as per usual in search of any sight that had the keywords "World" and "War" on the same page, I came across what amounted to World War II cosplayers. These people would get together and dress up as either generic soldiers in realistic uniforms, or as historic personalities like generals. Some of them reenacted battles, other just sort of stood around looking like retards. One group even reenacted a fucking staff meeting of generals, now that is exciting. How bored would you have to be to spend months putting together some ridiculously intricate uniform and then sit around in said uniform for three hours pretending to talk about some battle that happened over fifty years ago?

Unfortunately this gave me an idea. My fascination for World War II is primarily on the Nazi side of things. I read book after book about those wacky Germans and their even wackier tanks, airplanes, and holocausts. I noticed a serious lack of people dressing up as Nazis, why I can't imagine since their uniforms are "totally boss", and I decided that I would give myself a makeover. It was going to be exactly like one of those makeovers in Seventeen or Young & Modern, only instead of making my hair look like a hornet's thorax, or teasing my eyelashes into cubes, I was going to make myself up to look like the Nazist guy on the whole darn block.

Things didn't turn out quite as I expected.

For my step-by-step instructions on transforming myself into a Nazi, I looked no further than the nearest Blockbuster. I took all my cues from movies like "Indiana Jones" and "The Scorpion King", the latter of which didn't actually have Nazis but had some cool costume ideas I might use for Halloween. Sure, I could have done the painstaking research of the rest of the dress-up fags, but my crazy workaday schedule doesn't allow for such timewasters. In case any of you want to turn yourself into a Nazi for some reason, maybe to jump out from behind caskets and frighten children or just to beat the heat, I will reproduce my personal guide to becoming a Nazi.

The 75th SS German Awesome Brigade was a crack unit with a long history.

Step One - Choose a Unit

If you're going to be a part of a historic re-enactors group, you have to select a historic unit. Sounds easy, but all of the cool units are taken. Everyone wants to be a "Screaming Eagle" or an "Iron Mike", no one dresses up as anything with "Hussar" or "Lancer" in the title unless they want their ass kicked. Since all of these cool units are taken you are left with the ones that will earn you a bloody nose or a fictional unit. Fictional units will work just fine as long as you provide a realistic history. Most of the other re-enactor nerds are so totally lost in their own hyper-detailed anal accounts of their uniforms that they will hardly pay any attention to yours at all.

For my unit I went with the 75th SS "German Awesome Brigade". From there I developed a fake unit history. It was pretty brief so I'll go ahead and reproduce it here.

"The 75th SS German Awesome Brigade was formed in 1941 on the eve of the Invasion of the Soviet Union. It consisted of over 500,000 of the finest swordsman ever to be trained in Germany in the ancient samurai tradition. Each member of the unit carried a Katana blessed by the Japanese emperor Hirohito and drove a tank. They served throughout the war, distinguishing themselves particularly at the battle of Skull Keep, when General Fist nearly killed Stalin in a drawn out battle to the death. Stalin took the General's eye with his rapier but fled like a coward in his helicopter, leaving General Fist to die. Never one to surrender Fist made a full recovery, although his eye never healed. In his honor all of the members of the Awesome Brigade wore eye patches from that day forward. The unit escaped to China in a top-secret German rocket and General Fist went on to rule over a province of China called Awesomeopolis."

No one ever asked to see my unit history because I go thrown out when I tried to go to my first re-enactors meeting. I blame that more on a failure inherent in the system rather than any fault of my own.

In Nazi Germany facial scars were the number one thing that women looked for in men. Since I was dressing as a member of the 75th Awesome the eye patch would be a part of my uniform and thus a good starting point, but I really wanted to wow the socks off of all the fat re-enactor ladies. I decided that my uniform would belong to a soldier in the Assassin Cavalry platoon who was injured while fighting Russian bears in the freezing Siberian steppes. I used a standard wine corkscrew and gouged three parallel wounds across my face. Each wound was six inches long and ran diagonally from above my right eye to just above my chin. Sure it hurt like a bitch and cost me my job at the tanning salon, but like my mom always said "no pain, no re-enactor groupies".

If you see a difference between these two images you must be Detective Pixel McPhotoshop of Crop Tool Yard.

Step Three: Leave You in Stitches

Creating the uniform itself is definitely the most important part of your job as a devoted re-enactor. I had an eye patch already from when I was telling my friend a story and I got over excited and forgot I had a screwdriver in my hand and gouged out my eye. It was white and dumb looking so I colored it black with magic markers and made it look badass. I had a suit jacket that I could use as my uniform jacket. The rest of my "kit" consisted of the following:

A pair of sandals.

Three soup ladles with masking tape wrapped around the handle. I referred to these as my grenades.

Part of a child's race-car bed broken down into red-painted timber and placed inside a garbage bag. There was also the hand set from a rotary phone and the antenna from a Time-Life radio I got free when I subscribed to Young & Modern. This was my "radio backpack". I attached it to myself with decorative loops of twine and three rolls of duct tape.

My super shotgun, which consisted of two replica black powder rifles hot-glued to each other and a pre-owned laser pointer with an adjustable dial that allowed me to display either a targeting dot, a star, or the name "Keith".

A pair of sweatpants bloused into a pair of cowboy boots that were in turn sheathed in hot tar and saran wrap.

A T-shirt that had "World's Number One Grandpa" written in German across the front and a whimsical cartoon of an old man on the back.

A stapler that looked sort of like a Luger.

"Authentic" Awesome Brigade Merit and Honor Awards. These were actually Boy Scout awards I received when I was twelve for Citizenship and Rope Knots respectively with the addition of a Swastika I etched into the back with my car key.

Notice how every item I listed was carefully selected to fulfill the dual roles of authenticity and appearance. You can have one without the other, but if you don't look good being authentic then the battle is already lost.

Since no Nazi has ever been captured on film I had to go off a number of factoids I pulled from watching movies. Namely Nazis are really into basketball but can't actually play, they hate Jewish people for some reason, and they talk sort of like a bullfrog but higher-pitched. I got the voice down pretty easily by trying to talk like that kid from "Our Gang" and then slamming my fingers in a car door. The pained, hoarse, croaking voice was a perfect German impression.

When I actually got to the re-enactor meeting I strutted around and talked about Jordan coming back to play hoops and complained how his free throw has no doubt suffered while he was away. I theorized that if Jordan did not return to basketball it was no doubt part of a Jewish conspiracy to control the game. It was at that point that I was ejected from the re-enactors meeting.

Circus of the Photoshop Stars

Our good friend Livestock has once again whipped the SA Forums into shape and pressed them into service producing yet another belly exploding installment of Photoshop Phriday. The mirth is so gut bursting that it resembles that scene in the movie "Seven" where they find the fat guy who was forced to eat spaghetti until he was almost dead and then the bad guy kicked him in the stomach and ruptured his bowls. Only in a good way! This week the goons have a go at some old circus posters. 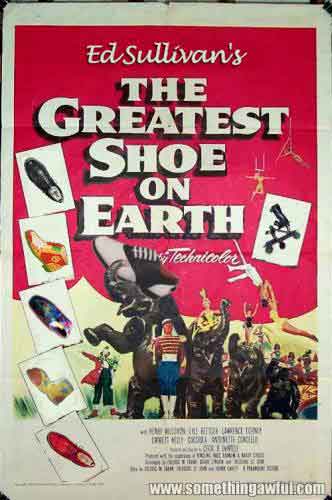 Folks if comedy like this grew on trees then we would have to water the leaves before lighting any fires because of a city hilarity ordinance! Check it out!