The Longest Day of My Half-Life 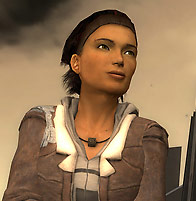 GORDON AND I GOT ALONG JUST FINE BEFORE YOU CAME ALONG.3:45 p.m. - Wake up and see that Valve has not released the Orange Box early. Figures! God knows it would be too difficult for them to stop toying with their fans and actually do something right for once.

3:55 p.m. - Oh, why not give us some more Peggle, Valve. Herd us around like sheep by having your cronies throw more children's games at us! Rome tried the whole bread and circus routine, and you know what it got them? Invaded by barbarian hoards, that's what. A few more prolonged game releases, and I hope you guys enjoy getting raped by Conan.

4:30 p.m. - Got into shouting match with girl at Taco Bell for being insensitive and condescending. No, I don't want lettuce on my tacos. If I wanted lettuce I'd order a goddamn salad, you stupid bitch. Who the hell eats a salad for breakfast anyways? Is every single person on this planet stupid? This dumb teenager's idiocy added an extra 30 seconds or so to my wait time. For all I know Orange Box was released while this dumb slut fumbled around her Taco Bell keyboard like some bonobo in a golf cart. I wish I could have slapped her in the face. I really should have.

4:42 p.m. - Return home and find that Orange Box still hasn't been released. What a surprise! I mean the games have been done for months given the fact they keep releasing screenshots and videos. Hey, I have an idea, stop showing off the game and release it. That's what other companies do with their games and it works well for them.

5:45 p.m. - Decide maybe Gabe Newell needs to be reminded that he's supposed to release his game. Sent him five e-mails over the span of 10 minutes, with no reply to any of them. He must not be near a computer. That's goddamn unprofessional at best and criminal negligence at worst. YOU'RE LUCKY I'M NOT A LITIGIOUS MAN.

6:40 p.m. - Spent exhausting hour calling up every buffet in a 40 mile radius of Valve HQ asking if they have seen Gabe. No confirmations. So what, he doesn't even care if his game gets released? Jesus Christ, what a company. Unless maybe he is dead?

7:13 p.m. - Spent exhausting half hour calling up similarly named people in the phone book and asking if Gabe was still alive. Most people hung up on me or got really upset. One old lady started crying, and I had to hang up on her. Then she called back and was still crying, so I unhooked the phone. What a bunch of weirdoes.

7:45 p.m. - Valve lies to millions of fans. It's true. Orange Box was supposed to come out on the 10th of October. Well, Australia is like 3 days ahead of the rest of the world, and they still don't have it. According to Wikipedia, Australia has a population of 21,105,000. Valve just basically lied to 21 million people. How many companies are that insane?

8:34 p.m. - This is almost worse than waiting for the release of Half-Life 2, which stole five years of life away from me. I could probably have gotten plastered and run over a bunch of kids and gotten less time. Honestly, it would have been way more fulfilling. Every day my favorite gaming sites would be filled with descriptions and screenshots of the game. Great, fucking spoilers everywhere. By the time the HL2 came out, I already knew it was about Gordon Freeman fighting aliens. It sure would have been fucking nice to find out about the game while playing it instead of beforehand.

YOU WANT ME TO JUMP THROUGH VIRTUAL HOOPS FOR YOU NOW TOO??9:43 p.m. - OH, OKAY, I GUESS I'LL PLAY SOME PEGGLE. LOOK AT ME BEING A MINDLESS GAMER BUYING INTO VALVE'S CON HOOK, LINE, AND SINKER. SHOOTING BALLS AT PEGS IS WHAT I PAID FOR.

9:58 p.m. - Uninstalled Peggle. Why? If I wanted to play a game this unfair I would have just been born black.

10:24 p.m. - Deleted steam out of frustration. I didn't even bother to uninstall it. I just went in and deleted the Steam folder like it was nothing. It was that easy. I've had harder times clearing the Internet cache on my step-mom's computer. This, this was just the right thing to do. Seriously, what a bunch of bullshit. The games are done, let us play them. I PAID YOU MONEY, YOU COCKSUCKERS.

11:02 p.m. - One last chance. Do you hear that Valve? One last chance is what you have. I'm re-installing Steam and re-downloading all my fucking local content and pre-loading Orange Box all over again. By the time it is done downloading, YOUR GAMES HAD BETTER BE OUT. If not, there aren't enough Peggles in the world to calm this raging tempest!!

11:38 p.m. - What I ought to do is bill Valve for the hole I just punched in the wall. If I had some games I paid for here to entertain me, I would not have had time to punch the wall or argue with my step-mom about getting therapy.

11:59 p.m. - I can no longer stand the wait. One vile indignity after another and Valve has finally pushed me too far. You know what? I don't even care about the Orange Box anymore. It's just going to be some stupid Stargate rip-off mixed with more Half-Life 2 levels ruined by Alyx constantly getting in the way of the action. It's obvious they aren't actually going to release it at this point. I'm going to bed. Between lime disease and a long day being emotionally battered by a bunch of rich nerds, I just don't have the energy to care anymore. I deleted Steam for the second and last time. Screw you Valve, you've dangled the carrot in front of my face all day. I don't even eat vegetables. I doubt anybody will even buy your stupid game, anyway.