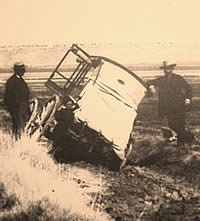 Had that dream where the dang stagecoach gets stuck real good in some mud. Thought the damn thing would sink, and me along with it. For some reason Ma was there and she was madder 'en a hornet about Pete stickin' his fingers in the beans again, but that might have been a whole other dream, come to think of it.

Real doozy last night. Dreamt my horse could talk, but all he kept a-doin' was callin' me rotten names. Wanted to teach him what for, but couldn't because he was flyin' above my head the whole time. Gonna be a tough day of ridin' after some of the things he said. I know he didn't really say them things, but it still hurts, and I still gotta put a saddle on his back. Wish he could fly like that, though. That'd be somethin'.

Not sure why I even keep this dang journal. Stupid medicine man said it would be good for my spirits, but what does he know? Last night I dreamt I was gettin' hung because I shot Pete after he stole my poncho. Now I'm all angry at Pete even though he didn't really steal my poncho. Don't feel bad about shootin' him though, and that 's weighin' awful heavy on my shoulders today.

Four straight days of eatin' beans by the campfire has really done a number on me. Last night I dreamt I came across a beautiful cow bathin' in this little pond at the base of a waterfall. I snuck up on her real gentle-like, then just started taking tender bites out of her back hoping she wouldn't notice. When she turned around, she had Pete's face. Woke up sweating. Gettin' mighty sick of ridin' with Pete. Think the two of us ought to part ways in Cheyenne.

Dreamt a snake ate me and Pete and we was the two of us gettin' digested inside the bugger. Pete took the occasion to let out a toot, and I wanted to kick Pete his dumb head except by then my legs and arms was gone and Pete was a shifting whirlwind of alternating poncho patterns. I think the snake somehow made Pete into a magic poncho is what I'm sayin', and I don't like sayin' it one bit.

Rough night of sleep on account of the storms overhead. Some big ol' thunderheads fixin' to let loose had me tossin' and turnin' like a Chinese launderer. Dreamt I was drownin' in some deep waters, but Pete was too busy charmin' a mayor's daughter to help. "Pete," I said, "the mayor will run us both out of town if you break her heart." Pete couldn't hear me, since I think I was under the water by that time. Don't know why I was true proud to ask Pete for help, but I guess I didn't want to mess up his chances with that pretty mayor's daughter. Doubt Pete would do the same for me.

Another night of bad dreams. Ain't one bit sure how this dream business even works. I'm on my horse ridin' through the goddang prairie, and somehow I'm still chattin' with Pete who is sittin' by a fireplace in a cabin. How's that even work? Now I know the human brain has a mighty strong tendency to frolic in the more abstract thoroughfares of thought, but that kind of discrepancy really sticks in my craw. The geographic distance between me and Pete is enough to hinder any kind of actual conversin', but Pete bein' inside a dang cabin makes it outright impossible. I'd be lucky to have a conversation just hollerin' at him from outside the cabin door. I shouldn't take this out on Pete, but I'm gonna. 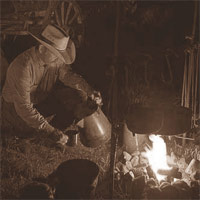 Yesterday was a real ordeal. Dreamt Pete and my horse was fixin' to kill me by way of a poison dart they secured from a travelin' Injun, only I knew and planned to duck when they shot at me. Spent the whole dream just preemptively duckin' just to make sure they couldn't shoot me. Horse wasn't talkin' none this time, at least not to me. Guess he was only speakin' to Pete, and not in my company. Never found out if they really did intend to kill me, because by then I was dreamin' about two hawks raisin' a human baby that fell into their nest. Wonder if a baby raised by birds could learn to fly, or at least speak in squawks like a bird?

Dreamt Pete was a real tall cactus, holdin' both of his arms up in the air, only now he was passin' judgment on me sayin' I done him wrong and I wasn't deservin' to live no more. Said he was gonna hang me right then and there from one of his big cactus arms. My horse was there, too, but he was wearing a mask. Wonder if this dream had anything to do with me shootin' Pete and my horse earlier in the day? Nah, none of them other dreams was related to things I done.