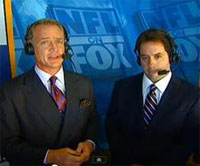 The following is a transcript of the Fox Sports broadcast of the November 28th Bears vs. Eagles NFL game played in Chicago. The announcers were veterans Kenny Albert and Daryl "Moose" Johnston. Because of NFL guidelines all play calls and cross-talk have been removed. What remains are the NFL factoids brought in by the announcers to add color to the game.

Johnston: If the Eagles pull out the win today they will be only the sixth team in the NFL over the past three years to win exactly this many road games.

Johnston: That Bears offense favors the left side on the run. Most left side rushing yards since the lefty offense of Dan Henning's '89 Chargers.

"Perfection in motion, Michael Vick will be appearing in my dreams tonight. Or is this ecstasy we are watching itself a dream?" - Moose JohnstonAlbert: Double pump fake from Vick once again throws the Bears D for a loop. Vick is the second most-likely QB to double pump fake in the NFL and the Bears need to get their head around that if they want to win today.

Johnston: Delay of game called on the Bears. This is the 48th home field delay of game call in Bears franchise history, second most in the NFC behind the Packers at Lazy Lambeau.

Albert: That is Olin Kreutz's third holding call of the game and gives the Bears a twelve-year-high 285 penalty yards on holding calls bringing them dead even with the 1992 Oakland Raiders.

Johnston: I saw DeSean Jackson eating a Papa John's pizza last night at the hotel. That is his 14th Papa Johns pizza of the season and ties his 2009 record for Dominos pizzas.

Johnston: Bears QB Jay Cutler holds an NFL record for number of glucose candies eaten during the second half of a game. He's beaten for first half record by Plaxico Burress with the Steelers in 2002. Plaxico got into the wrong bag and couldn't stop himself. He lapsed into a coma and he's not even diabetic. 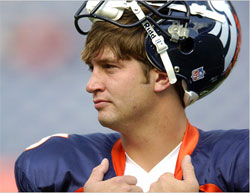 "Scabby, double-chinned, a body like a rising pan of bread dough, night-blind by diabetes, no child will ever wear his jersey, Jay Cutler is headed for the Super Bowl." - Moose JohnstonAlbert: Rookie Ricky Sapp getting in on some action here in the third quarter. Ricky comes to the Eagles from Clemson, home of the Sapps. He is the sixth player to have the last name Sapp in the NFL to have come out of that Sapp program at Clemson.

Albert: Michael Vick killed that ball rather than get sacked just like he killed a league record nineteen of his losing fighting dogs. He looked into that ball's eyes and killed it with his hands and as the life drained out he loved it and maybe it even got him a little sexually excited.

Johnston: The turf is playing havoc with the Eagles running game today and really slowing Vick down. The speed disadvantage of this turf is approximately equivalent to six-to-twelve inches of a medium-viscosity motor oil. Can you imagine playing in that sort of turf? God damn to hell the Soldier Field groundskeepers.

Johnston: Another Bears lucky win briefly gives this undeserving team the number one position in the NFC North. This is the least-deserving number one football team since the 1943 Jersey City Chestnuts, owned by New York mobster Chessy "Chestnuts" Gables, dominated the championships by being the only team fielding male players.