I have not seen Gulliver's Travels. What I have seen is half of a commercial promoting the movie. Of that, the only sequence that remains in my memory is a shirtless giant Jack Black absorbing a hundred tiny cannonballs in his midsection, then flinging them back by expanding his gut. With this extremely limited amount of information, my supercomputer-like brain will now project a number of scenes from the film - with a guaranteed 94% accuracy. 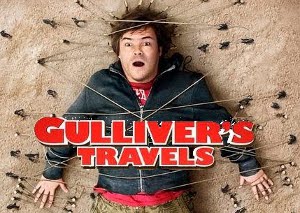 Giant Jack Black lets out a primo fart, then blames it on a dog. The comparatively small animal tilts its head, making the stock Hollywood "huh?" dog whine.

Giant Jack Black picks up an oversized guitar - probably from the Hard Rock casino sign - and jams out.

Giant Jack Black accidentally steps on a car, crushing it to a comically flat wafer. He covers his mouth in an exaggerated pantomime of guilt, then says "Sorry, dude!"

Giant Jack Black spots a quarter on the sidewalk, has a hell of a time picking it up.

Giant Jack Black finds himself in a police lineup. The witness narrows the suspect list down to giant Jack Black and a midget, then takes a very long time to decide which is the culprit.

Giant Jack Black, used to being out of shape, challenges a tiny athlete to a race in a cheap bid to boost his ego. Giant Jack Black loses, pulling up after three giant steps, out of breath and profusely sweating. 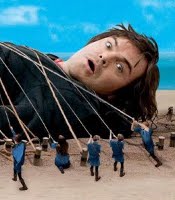 Giant Jack Black learns a very important lesson about how even our smallest actions have an impact on others.

Giant Jack Black farts in the bathtub, capsizing his friend's tiny boat. The small man exclaims "You sunk my battleship!"

Giant Jack Black blows a kiss to his love interest, knocking her over in a gust of wind.

Giant Jack Black cranks up music to properly "rock out" to "funky jams". In order for the music to seem loud to him, however, it must be played at such a volume as to blow out windows and cause a minor earthquake.

Giant Jack Black gets hungry. He states that he's hungry enough to eat a... (nearby horse neighs) dinosaur. A nearby dinosaur neighs. Giant Jack Black tries to eat that large donut sign on top of the donut shop that always shows up in movies about California. 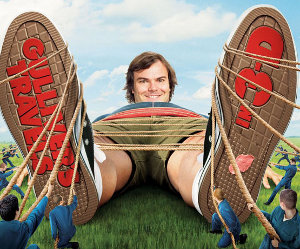 Giant Jack Black has to take a poop. After he poops, he realizes that there's no toilet paper. What to do? The scene ends with him eyeing a nearby wallpaper factory, then glancing about with one eyebrow raised.

Giant Jack Black is looking for someone in a city. One of the high rise apartment windows he looks into contains a sexy woman in her underwear. "Sorry, lady!" he says in a childlike manner, but when he covers his eyes, he separates two of his fingers just enough to sneak another peek.

Giant Jack Black sneezes, covering a group of people in very thick snot. There is a large hair in the snot.

Giant Jack Black tries to sneak quietly, but he is large so it does not work.

Giant Jack Black sings the classic Jimi Hendrix line "well I stand up next to a mountain, and chop it down with the edge of my hand", then karate chops a mountain. The mountain is not damaged, but giant Jack Black grabs his hand in pain and yelps.

Giant Jack Black stands next to a rollercoaster, arguing with the operator who won't let him on. He points to the only admittance sign, which reads "You must be this tall to ride", indicating a height of just three feet.

Giant Jack Black wears a disguise to avoid being spotted.

Giant Jack Black laments the lack of clothing options for a man of his stature. He proclaims that there should be a Big And REALLY Tall store.