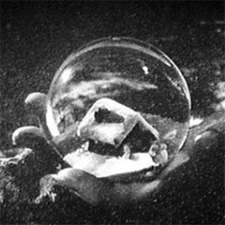 In 1941, snow globe awareness reached an all-time high.Are those outside doors locked, Dave? Good. People, I'm not going to mince words -- the shit's really hitting the fan for the snow globe industry. I know what you're thinking: "Oh, if things are so dire, then how can we afford to have comedian Louie Armstrong perform during our opening ceremonies?" Long answer: I had a coupon. Short answer: we can't. I'm greasing the fat bastard's palms with some of those Thomas Kinkade numbers from last Christmas -- god, it won't be long before that sex freak is hitting us up for more money.

Number three. This is where we rank on the Holiday Gift Spheres sales charts; yes, popcorn balls have us by the huevos, and -- can someone just tell me what the hell a "Kwanzaa balloon" is? Ah, to hell with it. The point is, we are losing valuable market share to upstart religions and pig feed! And I know some of you defeatists out there are hemming and hawing over the myth that "people just don't care about snow globes anymore;" well, naysayers, acquiring the coveted Snuffy Smith license caused worldwide snow globe sales to increase a whopping 3% in 2009, despite the popular lie that interest in Hillbilly culture died when Ellie May stopped prancing around CBS sound stages in those little shorts of hers.

We've lost the teen market; this is something we have to face. We were wrong to discount video games as a passing fad. Long gone are the times when young pre-adults would come home after a busy day of school to stare for hours at the wonders and mysteries contained in these little beauties. That minor sales spike we experienced from the rise in hallucinogenic drug is long gone... lost to the days of love beads and casual child abuse. Oh, and let's all give a big "thanks a heap" to our computer team for making our new e-Globe software such a MASSIVE JOKE that Dollar Tree won't even carry it in their bargain bin! Hey eggheads, there's a reason why I put you in the suite next to Louie's; hope you like suffering through the pained sobs of a wasted life as you desperately try to sleep without being woken by nightmares of your abject failure. 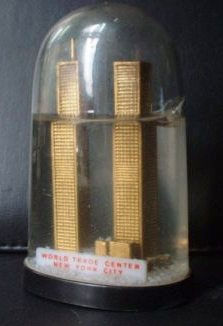 What's wrong with this picture? That's right; someone's missing a little globe fluid.Gentlemen, even our own government is against us. When the regulations for carrying liquids on airplanes rolled out, we assumed that Uncle Sam would grant us a stay of execution. He did not. The result? Those TSA security lines now look like goddamned snow globe GRAVEYARDS! Okay, now let's calm down; that's why we're here today -- the boys over in our "think tank" have come up with a solution that doesn't involve our customers stretching the capacity of their anal cavities to their very limits. We've had to sink a lot of capital into this idea, but I think you'll all agree that your pensions are well worth the continued existence of the snow globe industry.

Following the roll-out of our new system, airplane passengers will now be able to eliminate forbidden liquid at designated Globe-Draining Stations conveniently located near airport security terminals. When their globes are deemed empty enough to be incapable of exploding a standard-sized passenger plane, our customers can take them nearly anywhere without fear of death to America. So, what happens when they land? They'll merely restore the magic to their globes at a Globe-Refilling Station, located near participating airport Sbarro's -- we couldn't get an endorsement from anyone else. Now, as you all know, the liquid contained inside snow globes is highly caustic, and its fumes have been known to allegedly melt the brain stems of most mammals. Thankfully, this sinking economy has given us a stable of workers willing to allegedly melt their brain steams for minimum wage and all the discarded bread sticks they can eat.

Friends, I'd be lying if I said that our shrinking sales didn't scare the heebie-jeebies out of me; but that's what I said about my wife's murder trial, and after a few months of uncertainty, I was found completely innocent. Now let's get out there, strangle those problems, and bury them with the evidence down at the quarry!