Derek Smart is NOT Happy! Oh no!

As some of the more "observant" readers out there have noticed, I haven't personally updated this page since Monday. To counteract any uncontrolled wild speculations and malicious rumors, I asked Mr. Zack Parsons and Mr. Andrew Stine to create their very own wild speculations and malicious rumors regarding my absence. Since I haven't gotten any emails from people responding to faked Rich "Lowtax" Kyanka obituaries hosted on Geocities, a network known for their cutting-edge graveyard information services, I can only assume that my plan was an unbridled success.

However, I feel that I must explain where I've been the past few days. Some people have been claiming that I'm working on a secret project, one that will redefine the Japanese dancing genre of games as we know it. Other people are spreading rumors that I fell victim to a previous Awful Link of the Day webmaster, one who ran me down with his Toyota after I bashed his Angelfire "AzN PrYdE" site and the 50 megs of dancing Asian animated gifs included on each page. While both of these are plausible theories, neither could be further from the truth. Well, I guess they COULD be further from the truth, but the rumors would have to involve a bunch of bears driving those little circus cars around in circles. Ha ha, the circus. I hate the circus. 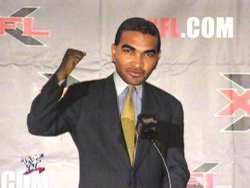 Derek Smart, showing support of the XFL. Actors say the cameras add 20 pounds to your body, or in this case, skull.

The true reason why I have been a recluse for the majority of the week is much scarier and involves significantly less carnival music. I have been terrified to the bone - unable to leave my bedroom and a good majority of my apartment - because there was a large chance that DEREK SMART COULD CRUSH ME LIKE A PATHETIC LITTLE FLY OR A TINY HORSE WHICH WAS SHRUNK WITH A RAY GUN AND HAS REALLY WEAK BONES BECAUSE ITS FARMER FED IT TAFFY AND ACORNS FOR THE PAST THREE YEARS, MAKING IT VERY EASY TO CRUSH. Don't know what I'm talking about? Neither did I at first, until I came across the following post on Voodoo Extreme (post #91), from the one, the only, Derek Smart. In response to the video I made, "Derek Smart's Desktop Commander," Mr. / Dr. / Intergalactic Commander / Master of Space and Time Derek Smart had the following choice words to say:

The fact is, JeffK, while being a tasteless, untalented, peabrain, can be quite hilarious. But, thats his gig. Can't fault him for it. To each his own. Jim Carey made a name for himself by making his buttcheeks talk. Go figure.

Lets put it this way, if I had a problem with JeffK, his site would CEASE TO EXIST in heartbeat for something like that video. With all the downward losses these ISPs have to contend with, the LAST thing they want, is to hear from Derek Smart and with a valid complaint.

However, the fact that he is deriving income from that video, casts a whole new light on things. I already put a call out to my attorney. We'll see how it shakes.

"Ha ha!" I said to myself. "Boy, Mr. / Dr. / Nuclear Technician / Pro Athlete Derek Smart sure hates that 'JeffK' fellah! I sure would hate to be in his shoes! Ha ha!" and then I continued lacing babies' cribs with barbed wire. However, after a few hours of quiet reflection, I began to sense something more sinister and foreboding in that seemingly innocent and outwardly threatening message.

Promotional screenshot from Derek Smart's upcoming game, whatever the hell it's called. See, it's funny because the graphics are outdated and look crappy! Ha ha!

"Wait a minute! 'Jeff K' is just a fictional character! Surely Mr. / Dr. / Commander / Superhero Derek Smart is intelligent enough to know that Jeff K. isn't real! That must mean... that must mean... HE WAS DIRECTING THAT MESSAGE TOWARDS ME!" At that point I began to simultaneously shriek like a schoolgirl and vomit blood, which I simply passed off as California performance art and ended up making 50 bucks in the process. After the initial shock of such an explosive revelation set in, a followup shock of explosive revelation began to set in, and I soon realized that this phase wasn't going to pass anytime soon. I immediately bolted my doors shut, hammering pieces of plywood and scrap lumber across them much like the time I saw "Dawn of the Dead" and wanted to zombie-proof my apartment against the upcoming invasion. And, much like the zombies, Derek Smart is an entity which mankind cannot kill. Years after Mr. / Dr. / Vice President / War Hero Derek Smart finally succumbs under the weight of his own skull and his entire body is crushed beneath its massive weight, email and newsgroup posts will continue to flood from his ISP account. Scientists estimate Derek Smart has sent so many posts, messages, and emails, that 80% of Cisco's growth is due to ISPs purchasing additional hardware and bandwidth just to carry his insane ramblings. Much like the Candyman, Derek Smart has a tendency to show up after his name is said three times. However, unlike the Candyman, Mr. / Dr. / Lieutenant Governor Derek Smart sometimes skips the "three times" part and and appears before anybody even has a chance to begin talking.

Since Derek Smart had an opportunity to express his opinions on a public forum, I think it's only fair that I break my silence and attempt to regain my sanity by responding to his claims. After all, the only way to face your fears is to face your fears. Wait a minute, that's not how that phrase went. Do you see what effect this raw, unbridled terror has had on me?

The fact is, JeffK, while being a tasteless, untalented, peabrain, can be quite hilarious. But, thats his gig. Can't fault him for it. To each his own. Jim Carey made a name for himself by making his buttcheeks talk. Go figure.

I am of course assuming that when Mr. / Dr. / Nursemaid Derek Smart mentions "JeffK", he is talking about me. The REAL Jeff K. is a l33t haX0r, skilled in the computer arts, so Derek can't possibly be referencing him. However, the "untalented peabrain" part of the quote really threw me off. True, I have not released any games where the main theme revolves around "gray cubes in space," but I don't think that makes me untalented. Since I am not a game designer and have never coded a commercial game in my life, I have not released a single playable game. This is in sharp contrast to Derek Smart, who is a game designer and has coded many commercial games, although he's never released a single playable game in his life. Mr. / Dr. / Tennis Pro Derek Smart does have a point though: Jim Carrey has made millions of dollars "by making his buttcheeks talk." What did Mr. Carrey's buttcheeks have to say? "Help, oh no, get out of me, Derek!" Ha ha! That's a little anal sex humor at the expense of Derek Smart. Thanks for playing along!

Lets put it this way, if I had a problem with JeffK, his site would CEASE TO EXIST in heartbeat for something like that video. With all the downward losses these ISPs have to contend with, the LAST thing they want, is to hear from Derek Smart and with a valid complaint.

OH NO! DEREK SMART, DESTROYER OF SOULS! CRUSHING EVERYTHING IN HIS PATH LIKE A FAT MAN ROLLING DOWN A HILL! With a snap of his finger and a wave of his magic wand, Derek Smart claims another victim! Luckily for me, the phrases "Derek Smart" and "valid complaint" never belong in the same sentence, unless the waiter at Denny's is explaining to his manager why he had to throw out the ranting nutcase whom all the other customers were bitching to him about. I can't imagine what bizarre legal grounds Mr. / Dr. / Surgeon General Derek has boiled up to get my site tossed, but I bet it's something really fantastic. It probably involves waterslides that blow up.

However, the fact that he is deriving income from that video, casts a whole new light on things. I already put a call out to my attorney. We'll see how it shakes.

HA HA! That's the best part of the letter. Mr. / Dr. / Super Secret Agent Derek Smart thinks I get paid to run this site! What a dope! Hey Derek, I work for a little company called eFront Media! Maybe you've heard of them! Their business model involves not paying people! If I get one month's pay from running this site, or one month's pay from working for them fulltime, I will be the most amazed human in the history of the world. Sue me until your big, fat, fat head is content! This site doesn't make me a dime! That's the best part of working for a company which refuses to pay any of their employees; you don't have to worry about people accusing you of "selling out" or threatening to sue you for everything you own because you don't make any cash whatsoever! If I wasn't so busy weeping my eyes out and praying for God to strike me dead, I'd be laughing in glorious triumph. Maybe I'll do that later.

So there it is, my response to the ever-prolific Derek Smart. I have to admit that much of the intense fear and horror I was experiencing has now passed. It feels great to finally get this all off my chest, allowing me to fully live my life without the terror hanging over my head. However, there is still a lingering presence in the back of my mind; the feeling that Mr. / Dr. / 143rd Infantry Squad Division Leader Derek Smart is hiding in a dark corner, ready to spring out and assault me with potentially nonexistent lawsuits. From now on, I'd better watch my step and not do anything to offend Derek Smart, like posting a big article about him on the front page of this site. And Mr. / Dr. / Grand Poobah Derek Smart, if you are reading this, don't bother suing me for everything I have, because YOU'VE ALREADY GOT IT, BUDDY! SCORE!!!

Hakan was kind enough to donate a wonderful "Guide to Spring Break," helping educate the teeming, unwashed masses to the ways of Spring Break. Here's a little clip for you people who are far too lazy to click the link:

Any Spring Break trip isn't complete without going to the beach, pool, or somewhere you have to wear a bathing suit. Keep in mind that normal people have bodies in excellent condition, like the kinds you see on TV. If you're a guy and can't bench-press a small car, you're a wuss. If you're a girl and don't have tits as big as a guy who can bench-press a small car, you're ugly. To compensate for your physical failures, do really stupid things like going bungee jumping naked or diving into a river from a bridge at night. Basically, anything that might give you pneumonia is good.

Sounds like good advice to me! Dig in, fathead!

Like the mighty Phoenix or some really pissy guy who was buried alive, "The Soap Banditos" has arisen from their grave, once again ready to tackle the cruel world! Head on over and check out the latest installment of everybody's favorite Internet comic strip, "The Soap Banditos!"