Unless you're a total raving idiot, you probably weren't fooled by our last minute April Fool's prank. I take full responsibility for the entire shenanigan, outside of the CDI logo, which was Lowtax's fine handiwork. Yes, we did get some emails from people that were fooled. And I don't really blame them, since we all know that everything you read on the Internet is totally true, 100% accurate, and meticulously researched… on every day except April Fools! I remember that as a kid I poured a bowl of sugar on my dad, screamed "April Fools," and laughed my ass off for hours because I thought I had just pulled the cleverest prank in the history of the universe. HAHA APRIL FOOLS!

Now go team up with your favorite superhero and notify us of the result!

As you'd probably expect, I get a lot of complaints. Most of the time, these grievances are aired out in real-life situations by sassy women who tell me to stop "getting all up in [her] face" and to "not go there." So these confrontations are hard to post on the Info Superhigh. But electronic mail complaints? Why, they're easy to share! Yesterday I got this choice piece of correspondence that I thought was quite stunning:

Listen, I am begging...please stop posting those god awful cartoons... [this is most likely a reference to "Fireman Comics" and "Saucy Lad," see yesterday's update] Whenever I read them my head hurts. They have horrible jokes, horrible animation and are overall horrible. They are so awful, you put the "awful" back in 'somethingawful'. Also...please stop updating. No one cares but your very small minority of fans. Your jokes might be funny on the lame ass quake servers you play on, but not on somethingawful. Please, please, please stop.

OH MY HEART HAS BEEN BROKEN. Let me respond to this in a Derek Smart-type manner. First of all, I did not produce those Fireman Comics. I merely scanned them in from 1950's-era magazines. The fact that they resemble MS Paint drawings and reference an egotistical game designer who wasn't even born at the time of their supposed publication is irrelevant, since that's probably just a coincidence. Names are not unique, you know, they aren't like mouse pads.

As for putting the "awful" back in Something Awful… what's wrong with that? If this site were called "Something Highbrow," then I would only tell dry, rich people jokes that would usually involve choosing the wrong type of wine for a particular situation, thus leading to social belittlement. But it's not. So why don't you put the "leg of lamb" back in 'your refrigerator,' you bloated human tube sock.

"No one cares but your very small minority of fans. Your jokes might be funny on the lame ass quake servers you play on, but not on somethingawful."

First of all, I have no fans. So your first argument just flew out the window and landed on an invisible tour bus. As for my jokes only being funny on the Quake servers I play on… huh?! Since you brought it up, though, perhaps I will share with you some of my favorite Quake server jokes. I am a Quake server stand-up comedian, after all!

Why did the Quake player lose the match? Because he had a 350 ping and his opponent had a 35 ping! DAMN LPB's!

YOU JUST GOT OWNED BY MY AXE HAHA BOOMSTICK!

Me: Hey, I think you forgot something PLAYER2
PLAYER2: What did I forget?
Me: Your marshmallows! Because you're a dirty camper!

So, in conclusion, I'm right and you're wrong and I'm better than you because I'm updating a two-bit failure of a "comedy" web page and you're not. I will not stop updating, despite your request. Does this suit your fancy? Does this make you upset? It matters not, because I am FRESH AND IN YOUR FACE, as Lowtax is fond of saying. Word to your mother.

I've forwarded your email to my lawyer. We'll see how it shakes.

Wednesday our wonderful House of Representatives approved a bill that would make sexual conduct with animals a felony. If this bill becomes law, craptacular Las Vegas entertainers Siegfried and Roy are sure to become the most wanted men in America. And I don't mean wanted by Richard Simmons, I mean wanted by the FBI. You just know those two guys include those mentally retarded white tigers in their sick little naked parties, but now the party's over you Nazi hellspawn! 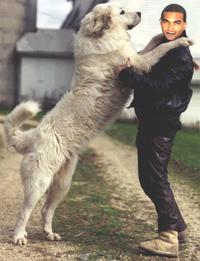 Not to worry Derek, you can still dance with your dog in public without fear of criminal prosecution. A futuristic paradise indeed!

Apparently this bill was pushed into congress by animal rights groups. God knows what took them so long, but it's kind of funny to see what they blame the recent rise in animal humping on:

Black said animal cruelty groups asked him to pass a bill because of weak penalties under current law.

That group [American Society for the Prevention of Cruelty to Animals] contends that bestiality is on the rise because of the Internet. Some Web sites offer advice to newcomers and sponsor parties in barns and basements, the group said.

Sure, blame the Internet. Hick ass farm boys have been pounding away on Bessie and her sheep pals since the dawn of time. The Internet just makes it easier for these guys to distribute pictures and movies of their inter-specie exploits. By the way, the Internet is also responsible for school shootings because web pages allow murderous students to easily access databases full of fellow schoolchildren and create customized "hit lists" with just a few simple keystrokes.

Not surprisingly, some democrats voiced concern over the bill:

"Most pets are very fond of their owners, and most pets lick their owners in the form of kissing," said Rep. Charles Morrow (D-Chicago). "I would not want someone to be charged with this offense because of an over-affectionate animal licking their master."

Don't worry Charles, I'm sure you can continue your nightly make out sessions with Fido and not worry about getting busted. Just don't get carried away and try to round second base, OK?

I can't wait to hear the excuses people come up with when they get in court. With statutory rape, "I swear I thought she was 18" is the most popular defense. What's it going to be with felony bestiality charges? "I swear I thought that cow was a really just a man in a full-size bovine bodysuit with fully-functioning udder?" Or maybe they'll just argue that the chicken seduced them? Who knows.

Personally, I think that if some poor soul wants to get it on with a tiger, risking getting his legs clawed off and siring some horrific half-man, half-tiger offspring, let him (or her, I guess). Is it really that much more disgusting and appalling than a rich 80-year old man having his way with a nubile coed? If America is truly all about giving the citizens the unalienable right to life, liberty, and the pursuit of happiness, why not let people pursue that happiness with a goat?

He hates me, he really hates me! Yup, good old Cliff Y. has updated with a whole new batch of Appleton mutants, all of which he doesn't particularly care for.

From: cliff y.
Subject: what shit

richard said to tell you that I got more pictures of freaks on my site. i dont know you but you sound like one of those fruits who fucking shit hump each other in that old dames flower bed and trample it up and fuck until I kick the living pansy out of them with my war boots. get a job you deadbeat queen

So head on over to Cliff's emporium of hate for disturbing pictures of people who may just be even more freakish than you.