We Love To Watch Shows About People Not Knowing Things

I Didn't Know I Was Pregnant is a television program in which human beings relate their actual tales of stealth fetuses that did not make their presence known until they dropped a smoke bomb and rappelled out of the womb. Each episode features a dramatic recreation in the style of Unsolved Mysteries, by which I mean a hilarious recreation. 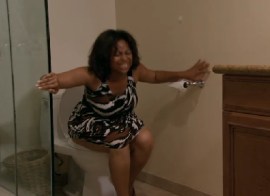 The baby's first contact tends to be with the cold water of a toilet bowl, its mother staring dumbly in a mixture of horror and repulsion for a good while as the tiny human flails about and nearly drowns. This is the sort of thing that is best seen in small doses, popping up for a few minutes on The Soup. Anything more than that and you'd slide from bemused shock to the sort of full-on depression that comes with watching one of those daytime judge shows or the pseudo-science infomercial that is Dr. Oz.

Somehow, though, the show exists as a stand-alone entity that people have watched since 2008. The clamor for programming based upon people not knowing things is surprisingly huge (you make the Fox News and/or political radio joke). In fact, the show's producers have created a number of spinoffs to capitalize on the burgeoning genre.

I Didn't Know I Was Omniscient

I Can't Tell Where I Am On This Map Of The Mall, Tell My Family I Love Them Very Much

I Didn't Know This Was A TV Show

I Didn't Know It Wasn't Butter, Your Honor

I Didn't Know Math Was The One With The Numbers

I Didn't Realize I Was Awake, Please Tell Your Family I'm Sorry For Swimming Through The Air

I Thought I Accidentally Left The Coffee Maker On When I Left In The Morning, But I Didn't

I Didn't Know This Tattoo Of A Swastika On My Face Supported Racism, I Just Like Hitler

I Didn't Know The Segway Had Already Been Invented

I Didn't Realize That String Theory Wasn't Taught With String Cheese, And Now I'm Stuck Being A Scientist

I Didn't Know The Konami Code Even Though I Said I Did, And Now My Spouse Is Gone

I Didn't Know That Ignorance Of A Law Wasn't A Defense

I Didn't Know That Time Was Linear, Sorry About Burning Your Chicken Nuggets

I Didn't Realize That Wrestling Was Fake, I Was Only Trying To Protect My Family

I Didn't Know Jack - I Thought I Did, But There Was This Whole Other Side That He Kept Hidden

I Had No Idea That Was Gary Oldman, Wow!