Wednesday, Dec 04, 2002 by Rich "Lowtax" Kyanka (@TwitterHasBannedAllMyAccountsEver)
Know of an awful site? Send it to us and become a hero!

Yohannon's Sexual Positions for Fat People, submitted by Zeruel. It's common knowledge that even fat people enjoy sex with ea- AAARGH, NO, I REFUSE TO THINK ABOUT FAT PEOPLE HAVING SEX. THE PREVIOUS SENTENCE DOES NOT EXIST IN ANY FASHION WHATSOEVER. Even if I refuse to conjure up the mental image of two blubbery landmasses repeatedly shuffling into each other's groin regions (wherever the hell they may be), Yohannon believes the world should learn from her detailed guide describing how to make two tectonic plates of lard collide until chunky juice begins flowing from one of their revolting holes. SEXXXY! 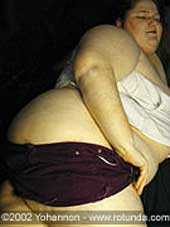 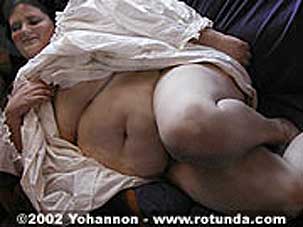 For example, I've heard from a lot of fat women with very large or hanging bellies that they thought that they couldn't perform this position. Well, if you place your butt on several cushions (this may require some experimentation. I think I mentioned that I like to experiment previously...you should too. ;-) this will lift you up enough so that your partner can kneel between your legs. If you're at the "right" height (this can vary depending on what angles feel comfortable for the two of you) he can insert his penis into your vagina fairly easily while holding on to you by the hips or whatever folds are accessible...and don't hurt when grasped in ecstasy. :) Note that this will also angle you back so that the woman body leans back. This will allow the stomach to lift up and away from her pussy, eliminating a lot of difficulty in entering.

PS: If any of the above pictures show any nudity, I apologize. I sincerely cannot tell, as all the amber waves of flesh kind of blend and merge together, and as far as I can tell, those images are simply collages consisting of a series of cow parts stapled together and shoved underneath a bed mattress cover.