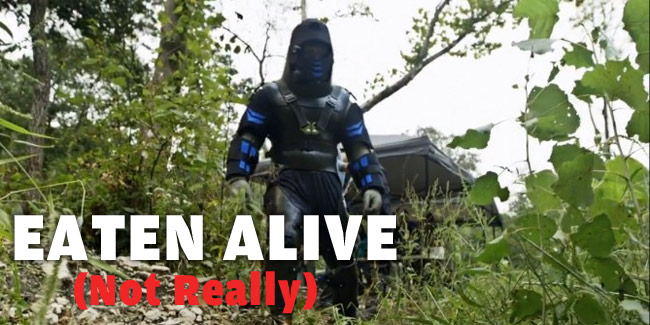 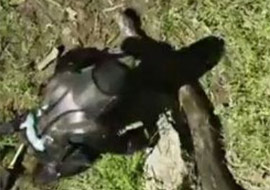 This past Sunday, the Discovery Channel aired a special in which supposed "naturalist" Paul Risolie donned a suit of lame armor drenched in pig's blood and covered with cameras and allowed a hungry python to begin eating him.

The snake made it about as far as swallowing the top quarter of Risolie's helmet before he called for his team to rescue him from the confused snake because it was hurting his arm. If this does not sound too exciting, well, you didn't hear the music and witness all the build up and see the dramatic cutting back and forth between all the camera angles interspersed with ominous descriptions and facts about pythons.

This special generated a lot of buzz and viewers for Discovery and the network will hopefully encourage Risolie to revisit the concept. Fortunately, with a little tweaking, almost any animal can eat a person. It's not like that snake really wanted to eat Master Chief.

Eaten Alive by a Tiger

A tiger won't normally eat something as big as a human whole, so Risolie disguises himself as part of a dead zebra and all the cameras as meatballs and spaghetti. Season liberally with shots of a tiger growling and swiping its claw at the camera.

Risolie looks at a tiger's jaws.

"Hard to believe I'm going in there because nothing comes out alive. But that's where I'm headed."

The tiger takes one bite of the zebra and Risolie gets up and starts cursing about a muscle cramp. 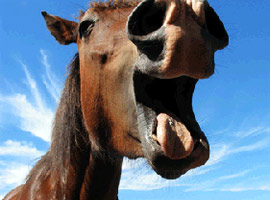 Eaten Alive by a Horse

Risolie dons an armored carrot suit and smears himself with alfalfa. "It's a hungry one."

"Here we go now. He's having a taste. In its natural habitat a horse can eat an entire carrot in seconds. Alright, this is okay. The pressure of a horse's bite is powerful enough to snap a carrot in half. Some horses are capable of swallowing carrots whole. Aw, fuck, get me out of here."

Camera shots up a horse's mouth with oat crunching sounds until Risolie has his hand bitten.