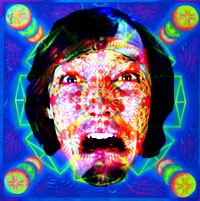 In 2010, Dr. Ron Waggman was granted unprecedented permission from the FDA and DEA to perform human experiments with DMT, a naturally-occurring molecule that creates intense, short-lasting psychedelic experiences. America's indigenous peoples have used plants containing DMT for centuries in spiritual rituals, claiming that the hallucinations bring them closer to their gods. Some scientists speculate that the brain's natural stock of DMT floods into the bloodstream during times of intense stress or euphoria, such as near-death experiences and religious epiphanies. In his study, Waggman hoped to explore the very real link between DMT and the cosmic-spiritual beyond. The following accounts are the true experiences of the subjects in the study, recorded just as they were returning to consciousness following a large intravenous dose of the drug.

I felt a strange taste in my mouth, then an incredible rush. I could hear a "whooshing" sound in my ears. Suddenly, I was flying at unbelievable speed, toward a wall of intense, kaleidoscopic colors. I felt that I could break through the wall if I concentrated hard enough. With a tremendous effort, I burst into the other side, and it was serene. I was on an alien craft, filled with lights and sounds. A being approached me. The being was the actor Matthew Lillard. He tried to hand me a watch, but this reality broke loose and scattered. I could feel Matthew Lillard wanting me to come back and take the watch.

It was powerful at first, and terrifying. I was convinced that Dr. Waggman had given me poison, and that I was dying. I felt myself die, and I was convinced that I was dead. There was a beam of light, and a voice told me that I was now in the universe of inner peace. I felt calm, and totally at peace with my death. The voice sounded familiar, like the man who played Maniac in the movie "Wing Commander." The voice told me to come into the light, and I trusted the voice. When I awoke, I was very sad; I wanted to stay dead, at peace, with Maniac.

I could feel myself hurtling through infinity. Suddenly, I was in a room that I had never seen before. It was warm and pleasant, and the actor Matthew Lillard was there. He smiled at me, and I had a very powerful sense that he had important and holy wisdom to impart. He asked me to trust him, and he handed me a video game controller. Ahead of me was a television; I was playing the video game "Crash Bandicoot." The year was 1996. Tears were streaming down my face.

There was a humming, and a throbbing. It was a sound and a feeling and light, all at once, all the same sensation. The colors were fantastic. I fell forever, for weeks it seemed, and I was in another place. There was a man with a mask and a knife, but I wasn't afraid. It wasn't real, like a movie set. The man took the mask off and it was Matthew Lillard, and he telepathically told me that they were filming the movie "Scream." Matthew Lillard had special knowledge to give to me, but he said he was not ready to tell me, and I had to come back. He was very busy filming the movie "Scream," and he could not give me the wisdom of universal love. I wanted to stay, but I felt myself being pulled away.

I found myself in a strange nursery or playroom. The toys were strange and alien. I was filled with joy, then fear; I was an infant. I sensed a presence at my side, like a guide or teacher. I looked over, and it was Matthew Lillard. He told me, without words, that everything would be fine. He pressed an object into my hand. It was a novelty Bill Clinton "Sex Dollars" bill. I knew that this had some special meaning, but now I don't remember what. He also tried to make me take a watch, but I didn't want it. When I came back to this world, the "Sex Dollars" bill was no longer in my hand, but I can still feel it there. My life feels very different now.

I felt myself separate from my body and float into the world, faster and faster, until I was totally disoriented. I was a mind moving through space, with no physical body. I was above a desert, and there was a body on the ground. My consciousness entered the body. I looked at myself and I was a Native American man. I was very tall and I had no clothes, only paint and feathers. Beside me was a guide, who looked like the guy who played Shaggy in the Scooby Doo movies. Matthew Lillard? He told me I must find my spirit animal. I ran into the desert night in pursuit of a stag. The stag turned to look at me, and it had the face of Matthew Lillard. It was sexual, but also not sexual. And then I was back here, with Dr. Waggman, and it was difficult to remember the feeling.

It was very sudden, almost as soon as Dr. Waggman made the injection. I was taken away, through sort of an aurora borealis, a veil of light and color. On the other side were stars, infinite stars, and I flew through them. I arrived in a room with no dimensions, no start or end. It was made of glowing cubes of color, like a Rubik's Cube. A big face appeared in front of me. It was the face of that guy who guest starred as the crazy nephew in the episode of SVU with Carol Burnett, and he was also in Scream. I was trying to remember his name, so I could say hello. He told me not to worry about it, and his face started pouring wireframes outward from inside itself in four dimensions. It was incredible, but I knew he was a little mad that I didn't remember his name. I was thinking "Breckin Meyer," but that was wrong, and he banished me from his realm.

There were beautiful colors all around me. It was perfect bliss. I didn't know whether I was dead or alive, but I felt a very profound and powerful presence, like being at the feet of God. I felt another presence there, a holy presence who was not God. I looked deeper into the colors, and they merged to form a 3D face. It was the actor Matthew Lillard. He told me he had something very important to tell me, but in exchange for his knowledge I had to take his totem. It was a novelty Bill Clinton watch that ran backward. It seemed like he didn't want it and was just trying to get rid of it. I decided not to take the watch, even though I knew the knowledge was important. I felt like he didn't blame me, but he was just going to try to give the watch to someone else. I came back to this room, and I wished I had more time with Matthew Lillard, although I was still glad I didn't take the watch.

(This is easily the dumbest thing I've ever written. - DT)