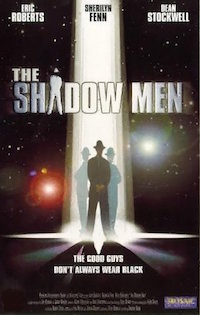 Overview: According to the consensus on the IMDB review boards, this is a landmark movie that finally gives the "Men in Black" who roam the Earth covering up alien abductions the serious, thoughtful treatment that they deserve, unlike those terrible Will Smith movies. Of course, that idea is insane on every possible level, but you knew that as soon as we said "IMDB review boards".

The Case For: Eric Roberts' family dog is named "Anthrax", which masterfully characterizes him as a moderate 80s thrash metal fun who isn't quite into it enough to know the names of any actual musicians, so he just went "fuck it" and named his dog after the whole band.

The Case Against: Any other movie you watch featuring alien abductions and government conspiracies will become a comedy after you've seen how utterly non-threatening all of the antagonists are in The Shadow Men. 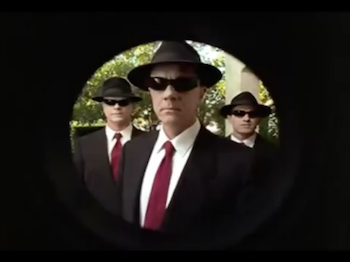 We've always said you just can't have a movie about alien abductions without some kind of far-reaching sinister government cover-up conspiracy. If you have no imagination and can't be bothered to look up any actual government agencies and what they do, then a solid option is always the generic "Men in Black", non-specific agents in black suits with the power to extraordinary rendition your ass straight to Area 51 if you so much as watch "E.T." too many times in a row.

Yes, aliens and Men in Black, they go together like peanut butter and black, nondescript jelly. But what if instead of that, we just changed it around so that the MiBs are the aliens, and they're just covering up themselves? And instead of the limitless resources of the entire federal government or powerful alien technology, they had a limitless supply of C-grade Blues Brothers cosplay outfits and an ill-defined ability to trace credit card purchases? Behold the heart-pounding terror that is The Shadow Men:

Only the Dutchest of angles can truly capture our scenes of mild peril!

This scene is also a great showcase for all of the powers of the MiBs, which include walking alone, walking in groups, walking towards other people in a vaguely menacing way, and sometimes even pointing at things. They don't have psychic powers, or alien weapons, nor will they stoop to using even just some regular human guns. Their combat tactics mostly involve grabbing people until someone else comes along to punch them in the face.

If there are really gray aliens hovering around the Earth secretly watching us, they should be thinking about a defamation of character lawsuit over this movie. The Shadow Men features the most grossly incompetent alien menace since Bigfoot's E.T. love child couldn't handle a posse of drunk 1800s highway bandits. First of all, these aliens created the totally ineffective MiBs to cover up their existence, and then to make things worse they gave them giant cartoon alien eyes you know, for secrecy and stealth. Or maybe they really don't give a shit about staying hidden, which would explain why their abduction procedures include just staring right into the lens of a running camcorder and then leaving it behind.

On the other hand, we couldn't think of a more deserving family to be embroiled in a really piss-poor interplanetary conspiracy than Eric Roberts and his dull wife and annoying son. Their family wilderness adventure and sarcasm marathon is rudely interrupted by a UFO buzzing their minivan over and over until it crashes into a ditch, which must be the alien equivalent of cow tipping. They spend the rest of the movie trying to survive the onslaught of MiB trying to silence them using the worst ideas they can all think of. Their brilliant tactics include:

All of this culminates in an ending in which nothing is resolved, the alien menace isn't stopped in any way, and yet everyone pretends they can just go live happily ever after in suburbia again. Sure, why not. How about we just end with a taste of some really stupid dialogue, instead?

[1] We know the alien suits aren't very convincing, but the characters in the movie aren't supposed to notice that, dammit.