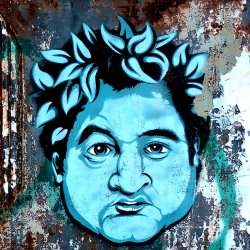 It's my third night of college and my roommate already has a girlfriend. He's having sex with her in the bunk above me right now. Our double room has become an informal triple, consisting of me, my roommate and the specter of self-doubt telling me I'll never be close to another human being. I'm considering suicide, but I've heard it's illegal, so there'd probably be a really harsh penalty for a multiple suicide - I'd be killing myself and all the people in my head I could've been before I went to college to learn how to program chairlift interfaces.

My roommate is a DJ at frat parties and looks Greek - all DJs are descended from galley drummers. His girlfriend is pretty but has too many tribal tattoos. Once he mentioned this flaw, but later said he hadn't been drinking and had his reality goggles on.

My room overlooks a square courtyard called the "quad." I've seen similar areas at other colleges, but think ours is the only one called the "quad" - or at least hope so. I want to believe that my college, its students and their hopes and dreams are unique and not just modular parts for a giant malfunctioning chairlift. The walls of the room are covered with supermodel posters. Today I tore one down looking for an electrical outlet and saw the words "HELP ME" written repeatedly on the wall in a mix of blood and hair gel, but then the poster re-affixed itself to the wall like a rapidly healing wound.

I'm trying to do homework, but my thoughts have the same rhythm as the sex above me, so every epiphany is drowned out by a coital moan. I wonder if doing homework and getting fornicated are somehow the same. I'd take some Adderall to improve my concentration, but it gives me stimulant psychosis. Last night, after taking several capsules, I heard all the rap songs in the dorm across the quad combine into one massive rap. I looked out the window and saw the dorm across the quad had become a giant hundred-eyed MC, the residents trapped in his head like people in a Hieronymus Bosch painting.

I put down my homework and read an article in the student newsletter. 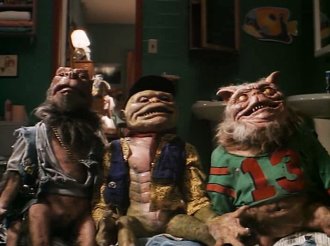 How to Get along with Your New Roommate

It's your worst nightmare: you come back to your room after a hard night of studying and it's full of people. The new Dave Matthews Band CD is blasting on the stereo and a couple are making out on your bed. The couple peel off their faces, revealing that they're actually monsters made out of television static. You run for the door but get lost in a maze of sewer tunnels where your worst fears mock you in your own voice....

Below the article is a list of recent alumni and their degrees. I can't help but notice how "AA" looks like a stifled scream.

My roommate and his girlfriend have stopped having sex, but the room is still shaking. It must be the portal in the adjacent building that students are sent through to their futures. Lately, objects have been coming out of it: student loan bills, bottles of antidepressants and retail counters.

I leave the room and walk across the quad, passing the windows of a night class. The students sit in rows of chairs that slope downward toward the podium, like skiers on a chairlift that only goes downhill.