Today I Met My Evil Clone 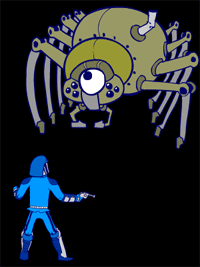 I got a call this morning from Dr. Laser, waking me up at 5:30 AM. Normally I don't sleep that late, but I've been doing some freelance work the past couple days, guarding this pool of green glowing toxic waste out in Area 6-2. Yes, I know it's a health hazard, but I'm getting overtime and I really don't have to worry about that asshole Player 1 swinging by anytime soon because there's this giant robot / spider / lawn tractor hybrid continuously pacing around Area 6-1, and let me tell you, it will be nearly impossible for that idiot Player 1 to kill that thing. I saw that moron Player 1 try to jump from this one moving platform to the next and, hahaha, the schmuck missed and FELL INTO THE WATER! Now here's where it gets real funny: apparently Player 1 is made out of Kool Aid or something, because as soon as he touched the water, he just DIED. He didn't thrash around or try to swim up, he just DIED. I heard the guy was supposed to be some ultra top-secret commando or something. I guess the government was forced by the ACLU to hire more handicapped commandos, giving jobs to folks with severe water solubility handicaps. Oh well, it just makes my job easier.

I should know, I was the guy they called to beta test it. I forget who gave me the job, I think it was Fat Flying Guy With a Cannon Strapped to His Back, he put me in this large grey room with the robot and said, "okay Blue Guy #762,182, here's a gun. Now try to kill this thing we built out of 70 Erector sets and 50 rolls of duct tape." Then he hands me this puny little pistol and shoves me under this monstrosity whose shadow was the size of a pregnant football field.

Now I'll be the first to admit I'm not a very brave man. I had to turn off my television halfway through that one episode of "The X-Files" where Mulder fights the Leech Man. But hell, as soon as I looked up at that giant robot spider contraption, any possible remaining bit of fear just instantly left me. I don't want to spread any rumors, but I think the development department is running a little short on cash. I swear I saw pieces of a used stroller welded on to the bottom of that thing.

"What's that giant eyeball up there for?" I asked while pointing to the convenience store-sized white orb glued to the top of the spider's metal body frame. The rumbling, giant machine clumsily lifted up one of its pointy legs and futilely attempted to impale me by slamming into the location I was standing roughly 20 seconds earlier. A large pipe running from its rear belched out a plume of exhaust like a filthy coal fart.

"What do YOU think it's for?" Fat Flying Guy With a Cannon Strapped to His Back replied, scrawling some notes down on his clipboard. He seemed to be frustrated with the pace of the epic battle so far, slowly shaking his head with disapproval. I really didn't care, it was his stupid robot and I was getting a paycheck. That's all that mattered to me.

"Well I'm assuming that's its easily obvious vulnerable point, the one place I can target and ensure this thing will go down quicker than my first two marriages." I unloaded a few rounds into the monstrous pale sphere, and sure enough, the robot began flashing colors and moving noticeably faster. I took a few steps backwards because I didn't want the spastic thing falling onto me and ruining the new blue shirt I just ironed this morning. Plus my health has been hovering around 43% ever since I got food poisoning a couple nights ago at the Magic Dragon Chinese food joint downtown, and I guessed simply touching that idiot robot would easily knock me down to around 10 or 20%.

Fat Flying Guy With a Cannon Strapped to His Back cursed under his breath and snapped his pencil in half. "I knew it! I friggin' knew it! I told those idiots in R&D not to put the weak point in the front! I told them, I says, 'put the giant eyeball full of explosives in the back, like maybe under a fishing net or a bunch of newspapers or something!' and they said that they couldn't because it was a load bearing eyeball. I mean, I don't even understand why all our robots are required to have these really huge weak spots anyway. If I was designing the thing, I'd just leave off the eyeball entirely. It doesn't even do anything, it's just a big storage container of dynamite. Why do we need that?" 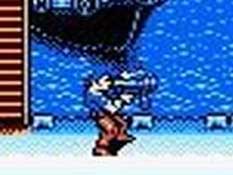 I've had to hold this giant bazooka-thingy out here in the snow for like, the past two days straight. I just stand here like an idiot, continuously shooting forward. I never run out of ammo, I just keep shooting. At nothing.

I shrugged my shoulders and handed him my pistol. I'm not a scientist, I'm just a guy getting paid minimum wage with no benefits to run forward and backwards continuously for eight hour shifts. "Maybe you should give it a giant metal eyelid. Something to protect it from blowing up so easily."

"Nah, I already suggested that and those white coats said if they did that, the eyelid would have to periodically open once every five seconds, completely exposing it to attack." He paused and squinted his eyes at the thrashing mechanical failure. "I thought that was at least a step in the right direction, at least until they told me I would have to climb up and bolt the eyelid down on the spider, and I told them I ain't climbing on crap for $9.00 an hour."

"Yeah, which is nearly enough to cover the medical bills I'm running up from this worthless cannon I got strapped to my back." The giant hollow tube on his back showed signs of wear, covered in scratches and a thick blanket of blackened gunpowder. I looked at him and suddenly noticed how slumped over he stood, his posture practically nonexistent. "My health insurance premiums are insane. I bought one of those space-age mattresses that are supposed to be good for you, but..." He then paused and let out a sigh, interrupted by the machine gun hammering of the robot spider's chattering legs. "But they don't work. Maybe I should buy one of those bright yellow Livestrong bracelets or something."

An uncomfortable silence resonated between us as we both stared into opposite distances. I asked if I could leave and he nodded his head.

As I hung up the phone this morning and crawled out of bed, I heard some strange noises coming from my kitchen. These weren't the normal strange noises I usually hear, the sounds from the giant snake and spider that crawl around the joint. Don't ask me how those things got in here or what they spend all day doing. I've killed them like at least 200 times each and they just reappear every time I travel back from another screen. Now I know why the rent on my place is so freaking low; they didn't warn me about the eternally spawning giant spider and snake duo crawling back and forth all hours of the day. I would report those real estate jerks to the BBB but, honestly, I got a good deal on it. You can't find another four-ladder house in this level for such a cheap price. 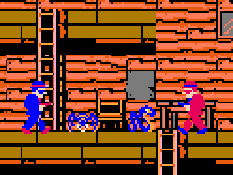 I threw on a clean blue suit and walked into my kitchen, nearly bumping into the surprise of my life. There, not even two feet in front of me, was an exact replica of myself! Well, his color palette was blatantly reversed, but besides that, he was a perfect pixel-by-pixel clone! As his black squares stared back into my black squares, I knew those bozos at Mr. X's corporate headquarters had something to do with this. I mean, for crying out load, it's not every morning that you walk into your kitchen and see an inversely colored copy of yourself staring back at you. One of the giant snakes bumped into him and produced a loud triangle wave collision sound effect. He seemed unfazed

"So I guess you're my evil clone," I stated while straightening my sleeves.

"So I guess you're my good clone," he replied, almost in a mimicking tone of voice. I already hated the guy.

"Wait, don't go," he pleaded. As I yanked my arm away from him, my frustration began to snowball. "I've GOT to leave. Here, let me break it down for you and say it in terms you might understand: if I don't leave for work right now, you WILL be able to afford utilities this month. Get it?"

"If you start walking to the right, that means I have to start walking to the left, and I don't want to be stuck over there in your bedroom for the next eight hours." He looked down and watched the giant snake slide face-first into a chair, resulting in another blaring triangle wave. "And I really can't take that kind of crap right now. I'm really hung over and feel like throwing up."

I stared at him for a few seconds before replying. "Oh, I get it. You're hung over because last night-"

He interrupted me. "-you didn't drink at all. Yeah, you know, the whole reverse thing." I could hear the clock ticking seconds away as the snake and spider paced restlessly between us. 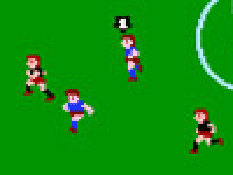 "Why did somebody even bother making an evil clone of me?" I asked, casually scratching my left ear as my bizarro copy began scratching his right buttock. "I don't have any superpowers. I'm not Player #1. I'm not going to bother fighting any giant alien dinosaurs or zombie Hitlers so I can topple Mr. X's fascist regime. I don't need an evil clone to stop me because, hell, I'm not going anywhere."

"I think it was more of a prototype deal," the clone replied. "You know, to make sure the technology is all there. I heard they were going to originally make me an evil clone of Chinese Guy Who Spits Fire #59, which would've really sucked big time. What would my reverse superpower be then? Inhaling fire? I see people at the circus do that crap and they probably get paid better than I ever will. Have you even tried to spend reverse clone money? It's worthless. The exchange rate is like -10%."

"Listen, I really gotta go. This is all very fascinating and everything, but really, I can't be late." As I stared into the giant black pixels of my evil clone's eyes, I felt myself overcome with sympathy for this poor creature who never asked to be spawned on my level. I tried to lighten the mood a bit. "There's this chick at work, Blonde In Leather With Electric Whip #462, and I'm really trying to put the moves on her big time, so I want to be there when she punches in." I picked up my hat and began walking towards the front door, causing my reverse clone to begin walking towards the bedroom.

That morning I beat my evil clone to death with a snow shovel.