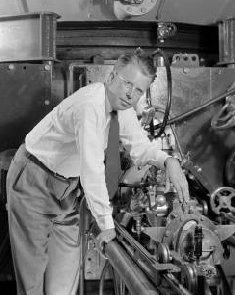 There are two kinds of people in this world, the common schlubs who work all day long for chicken scratch, living paycheck to paycheck, and the elite inventors who create all the useful things that make our lives easier and are on easy street as a result. For years I have been the prior, slaving away like a sap in the coal mines, with barely enough money to afford my expensive heroin addiction or my 14 potbellied piglets. Frankly I'm tired of being a chump and want a piece of the big money pie in the sky. With such runaway hits like the George Foreman Grill, the Flowbee, and the Cotton Gin, I would be a fool to pass up this golden opportunity to cash in on this infomercial fad. It's a buyers market, and this heroin ain't getting any cheaper.

I don't like to toot my own horn but I've always had a knack for inventing useful items, even at a young age. When I was 6 I made a stick covered in glue and tacks to protect Mommy from Pa's drunken rages. When I was 14 I fused a kite and freshly killed opossum together to make the first flying opossum corpse, as well as a useful spy on the girls I was stalking at the time. Even last year I built a perpetual energy machine when I accidently dropped some copper coils into my bathtub full of water balloons, peanut butter, and 2 ferrets. It seems like I have a natural talent to just create amazing things with hardly any effort at all. Sometimes I think God has put me on this planet to use my great talent to help my fellow humans of this world, but I like to think that he wants me to be filthy rich instead.

Today I'll give you an exclusive inside look at some of the prototypes I'm working on, but don't even think about stealing my ideas. I couldn't afford patents for any of these, but I had a voodoo witch put a curse on them for a Hot Pocket and front row tickets to a Bon Jovi concert. If you even think about taking my inventions for your own, or if you’re reading this sentence right now, you will fall madly in love with me and buy me assloads of candy. I'm partial to Nerds.

'Lil Wall Street Shoe Horn Helper: I thought of this idea 8 years ago when I first started getting into the stock market. The lure of easy money for no work was a siren call I couldn't resist, and I took all my savings and invested heavily into these new things called "dot com companies" that was sure to net me millions in profit. The big problem I ran into while involved in share trading was knowing what price my stock was worth at any given moment. I would always find myself trying to get my polished dress shoes crammed on my horribly mutated feet while wondering what my stocks were doing. This problem was solved by my invention of the 'Lil Wall Street Shoe Horn Helper that I crafted out of a nickel alloy, a stopwatch LCD, and cutting edge satellite technology. Now you don't have to wait until you get your shoes on to go check your stocks. The stock ticker is built directly into the shoe horn, so while you are struggling with your horribly mutated feet for hours on end, you can keep tabs on your financial earnings and losses, with only a few seconds lag. I personally wouldn't use this product anymore since I lost all my money on Worldcom and some magic beans, but I'm sure there are a lot of shoe wearing investors who will buy these in bulk.
Retail Price: $19.99 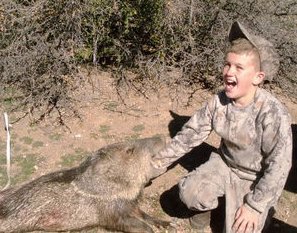 This picture of me was taken in 1984 when my hand was eaten by a boar and I had to replace it with a Lego claw that I still use today.

The Frolixo Taco-Matic 5000: Sure I may be ripping off the George Foreman grill and the Dion Sanders Hot Dog Express, but what can I say, I'm a sucker for easy to make and delicious tacos at an affordable price. Do you ever get sick of trying to make homemade tacos and getting spiced ground beef, shredded cheese, and lettuce all over your house, and then your wife is walking down the stairs and slips on the mess and breaks her spine on the railing, only to become a vegetable and have her feeding tube removed by those liberal jerkface judges with big butts and a deep hatred for tacos? With the Frolixo Taco-Matic 5000 you get rid of the mess and pay less. I just made that up right now. (The Taco-Matic 5000 still has a few known issues relating to radiation poisoning and exploding when turned on, and when not turned on. The bugs have been issued in a release note to the investors and we are planning to fix it in phase 6 of the rollout and code download. Don’t attempt to make tacos until this phase is complete sometime in late October.)
Retail Price: $49.99

Roller-Derby Lint Away: Don’t you hate minorities? Me too, but you know what I hate worse? My collection of derbies getting lint all over them, and not having enough time to clean them in time for the jamboree down by the Dingly Dell. That’s why I came up with an idea to be able to roll away lint from multiple derbies at once, and in seconds flat! The Roller-Derby Lint Away consists of a highly modified pair of rollers skates the user puts on their feet. But this is the catch: instead of wheels on the skates, they have lint rollers attached to the chassis. That means that with the ease of simply skating across your plentiful hat collection, you can rest easy knowing that you’ll never get caught with your pants down with a farm animal and a lint covered derby ever again. I highly recommend looking into this new item that will be hitting the markets soon if you care to raise your social standing with the lords and ladies of high society and become the talk of the town. Coming soon: Roller-Mustache Waxer.
Retail Price: $21.99 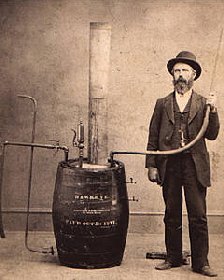 This picture is of my Grandpappy after he invented the first atomic bomb. This one here was used against Crazy Horse and his tribe to win the west for the white man.

Pysduck Naughty-Tyme Ring Tone: This is one I just thought up a few hours ago so there are a lot of logistics to work out, but I really want to make this happen. If I can get some rights to use the Pokemon, Psyduck, I want to create a ring tone for cell phones that will have the worrisome character talking in a sultry, low, seductive voice telling you to pick up the phone. I really can’t wait to get working on this one and I plan to start as soon as I finish these ramen noodles. I told you I was full of great ideas.
Retail Price: $4.99 per tone

Robot Buddy X-2020: This is something I thought up while locked in a sweat box doing time in an Alabama prison for killing a man. I got to thinking that everybody in this world seems really lonely, and that there should be a friend for everyone out there, no matter what horrible personality they have. After 20 years of trial and error, I finally nailed it down to a workable prototype that, as far as I’m concerned, is ready for the open market. The Robot Buddy has a neural net processor, a learning computer. It has the ability to pretend to care about you and will be there for you during your toughest times as you cry on its shoulder. I must stress, though, that crying on the robot is not recommended and has caused a few test models to go haywire and dismember its master and then go on to assassinate prominent Indy rock bands and hijack traffic helicopters before finally being brought down by a surface to air missile. The robot comes with a really cute pair of overalls and has red eyes that are laser beams. These beams are not deadly at all, but I recommend you don’t stare right into its eyes because you can go blind, and it will also take this as a confrontation and attack you. Once activated don’t attempt to shut it down or it will self-destruct, taking out a roughly 1,000 yard radius. I plan to release it in the colors black, red, and silver.
Retail Price: 10 easy payments of $129.99