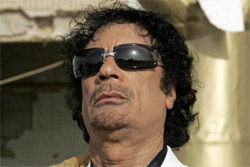 The wheelbarrow of US secret documents has once again been overturned by truth-seeker, attention-seeker, and Man Who Fell to Earth, Julian Assange. If you're interested in reading long profiles of the Austrian political environment in late 2008 or you want to find out what embassy officials called Kim Jong Il after a meeting ("roly-poly hotard") then you're in luck. Me? All I care about can be found in a single document entitled, "A GLIMPSE INTO LIBYAN LEADER QADHAFI'S ECCENTRICITIES."

By the way, WikiLeaks included "cablegate" in the URL for all these cables and I don't think you get to name your own scandal that you are trying to create. It's too similar to naming your kid something horribly aspirational like "King" or "Hero" or "Steampunk." Bad form, Assange. Maybe those CIA rape charges are true.

Regardless of Assange's promotional excesses and unlawful girly-touching, I fell in love with this particular leaked document. I have been a fan of Col. Gaddafi's since the 1980s, when he was frequently framed as America's greatest enemy next to all our other greatest enemies. Gaddafi is the rock star ruler of the Middle East. He thumbs his nose at all conventions.

He lives like you or I would live if, through some King Ralphian plot twist, we suddenly found ourselves as the despotic rulers of a country. The leaked State Department details about Gaddafi are perfectly in keeping with his established comedy character.

For example, to enter New York for a UN summit Gaddafi had to apply for a diplomatic visa. His handlers wanted to avoid troubling the good Colonel with the photograph for the application. 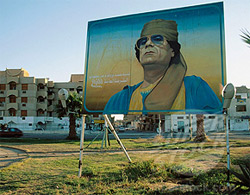 When applying for Qadhafi's visa, XXXXXXX asked whether it was necessary for the Leader to submit a portrait of himself that fit consular application regulations, noting that his photo was displayed throughout the city and that anyone of hundreds of billboards could be photographed and shrunken to fit the application's criteria. When the rule was enforced, XXXXXXXXX reluctantly conceded to take a portrait of the Leader specifically for the visa application.

Also there are lots of pictures of Gaddafi on the Internet, could we just use one of those? For his accommodations in the United States, Gaddafi insisted on staying on the first floor of a building and that he could ascend "no more than 35 steps." Gaddafi ended up staying in New Jersey, as publicized, so he could pitch his traditional Bedouin tent in somebody's backyard. 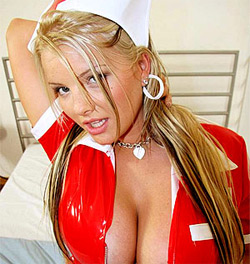 Gaddafi also can't stand flights over eight hours, so he was forced to fly from Libya, spend the night in Europe, and fly to the United States from Portugal. Only one of his female bodyguards accompanied him and the cable notes that, "Observers in Tripoli speculate that the female guard force is beginning to play a diminished role among the Leader's personal security staff." Increased respect for Blackwater or decreased libido? My guess is the former after reading about Gaddafi's private nurse.

Finally, Qadhafi relies heavily on his long-time Ukrainian nurse, Galyna Kolotnytska, who has been described as a "voluptuous blonde." Of the rumored staff of four Ukrainian nurses that cater to the Leader's health and well-being, XXXXXXXXXXX emphasized to multiple Emboffs that Qadhafi cannot travel without Kolotnytska, as she alone "knows his routine."

Early to bed, early to rise, or so they say in the Ukraine, but Gaddafi was nearly deprived of sweet Kolotnytska due to a visa delay. Lucky for him, he's a freaking dictator. He flew her to Portugal on her own jet and spent the night, uh, receiving those blood pressure cuffs over and over. On his unit.

Admittedly, Gaddafi has been involved in blowing innocent people up and supporting terrorism, but if WikiLeaks has taught us anything it's that so has everyone else.